Since 2005, the Italian National Health System (NHS) has implemented a screening program for colorectal cancer for all citizens over 50. Screening tests are free for the target population (so-called Minimal Care Level guaranteed for all Italian citizens). Invitees are asked to take an immunological test for Faecal Occult Blood (FOBT) every two years. Individuals with a positive FOBT test are invited to undergo a total colonoscopy in an SSN-accredited Endoscopy Department.

Each Italian Region has a centre for the coordination of the screening programme, which employs a dedicated software that can trace the progress of each citizen within the programme:

The 'Screening Centre' has a database that can provide a detailed, real-time status of the programme: it is therefore possible to compare the characteristics of screen-detected and non-screen-detected cancers.

After completing the first round of the programme (all citizens of Milan were invited to undergo FOBT through a letter, followed by reminders to non-compliant subjects), in Milan, 327 carcinomas and 1370 'high-risk' polyps were detected in asymptomatic patients out of 4907 total colonoscopies (PPV in colonoscopy after FOBT positive: 8 33.5 = 41.5%). Programme DR for carcinoma: 3.17%, Programme DR for 'high risk' polyps: 13.27%.

Through the NHS archives, it was possible to analyse workload and results of colorectal-cancer treatment in clinical practice ('symptomatic' patients) over the same period of time as the NHS-activated screening.

Table 3 shows colorectal-cancer cases treated at the European Institute of Oncology (a cancer centre in Milan that is one of the nine SSN-accredited endoscopy units for the screening programme, as well as a general surgery unit). Between January 2006 and August 2008, 503 operations for colorectal cancer were performed, 228 of which were carried out on patients, aged 50–69, from Lombardy. Of these 228 operations, 106 cases (45%) were screen detected and 38 of which (35.8%) for cancerous polyps. Over the same period, 122 operations were performed for non-screen-detected cancers (53% of the total), 14 of which (11.4%) for cancerous polyps.

During the first screening round (2006–7), colorectal-cancer incidence increased both in Lombardy and in Milan, as reported in the corresponding Tumour Registry. This increase is due to the diagnosis of colorectal cancer in asymptomatic subjects. Through tumour registries it will be possible to evaluate whether there is a future incidence decrease (which is probable, considering that during the screening 'high-risk' polyps are diagnosed and removed, that is definitely pre-cancer lesions).

Because of the screening programme, it is more often possible to detect lesions that were rare during the pre-screening era. In particular, a large number of 'cancerous' and 'high-risk' polyps are detected and treated. This has led to better knowledge of these lesions.

Figures 1–8 show histopathological characteristics of cancerous polyps at 'low' and 'high risks' for nodal metastases. Because of the everyday incidence of these 'early-stage' carcinomas, the screening programme led to an improvement in both endoscopic and pathological diagnoses, with a better evaluation of these lesions by endoscopists, pathologists and surgeons who have to manage, with the patient, their 'clinical risk'.

Endoscopists from screening-accredited centres must acquire great expertise in treating lesions detected in FOBT positive subjects. Videos 1–3 show some endoscopic procedures performed for screen-detected lesions by the Division of Endoscopy of the European Institute of Oncology. 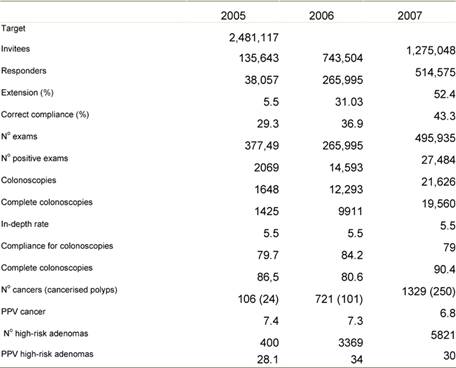 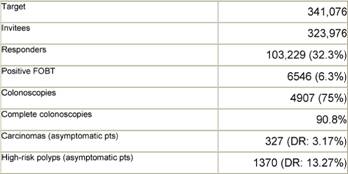 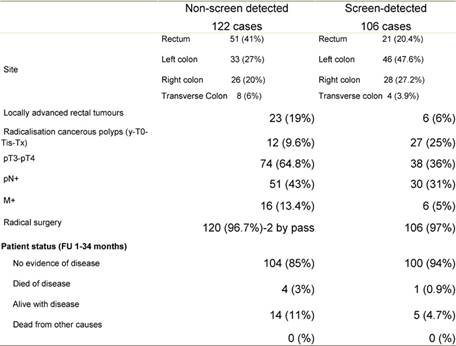 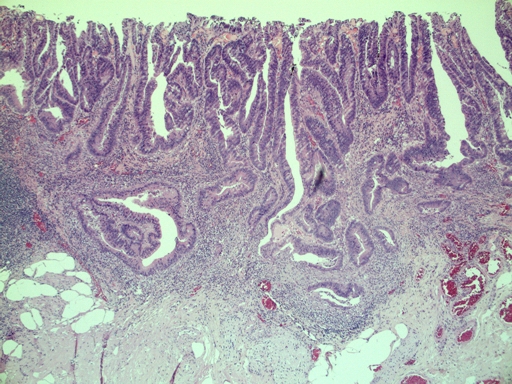 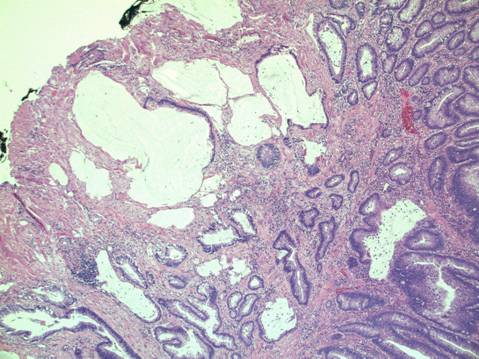 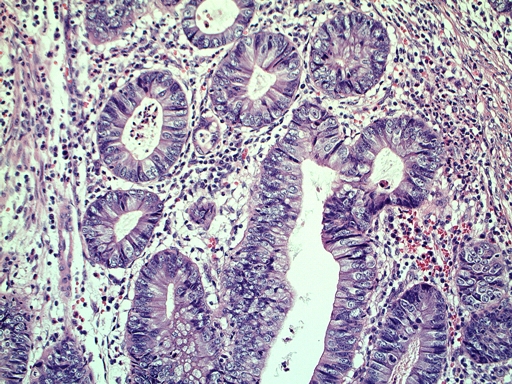 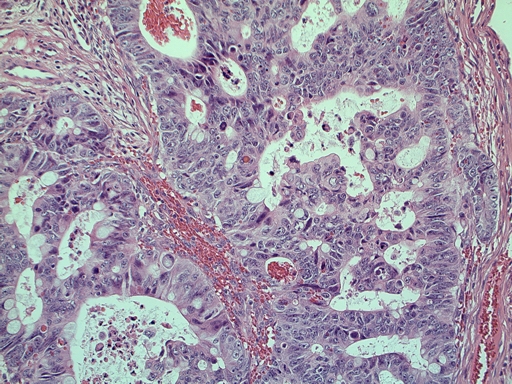 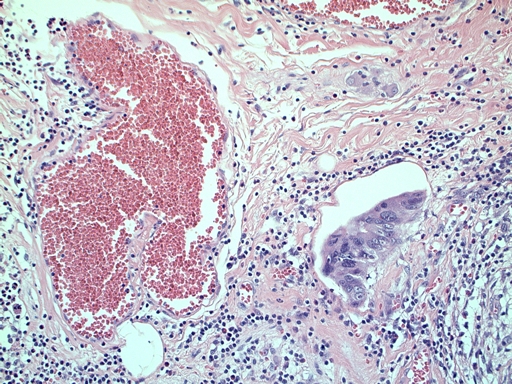 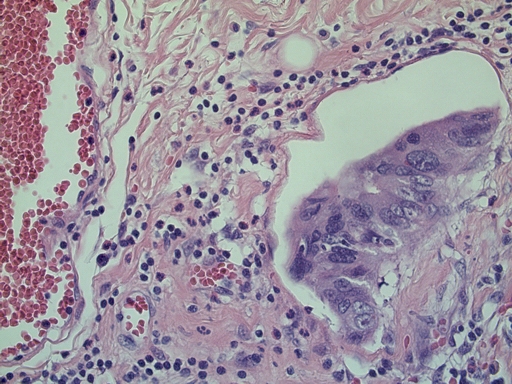 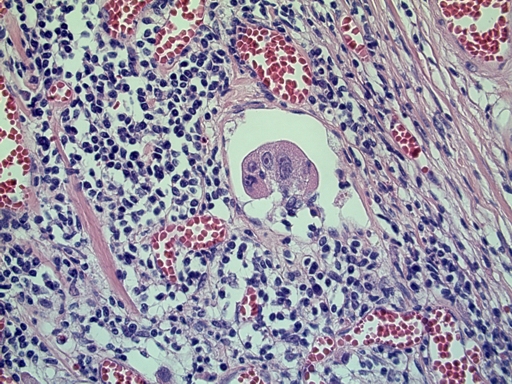 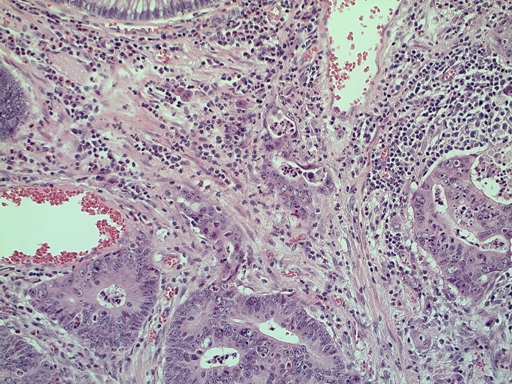 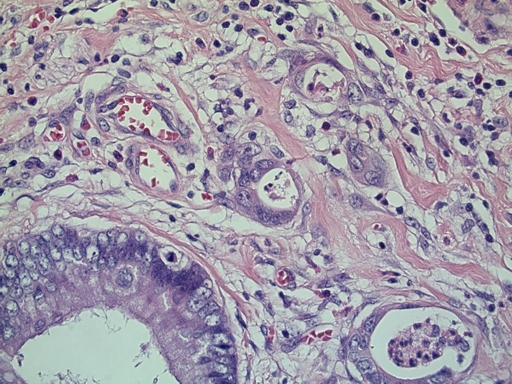 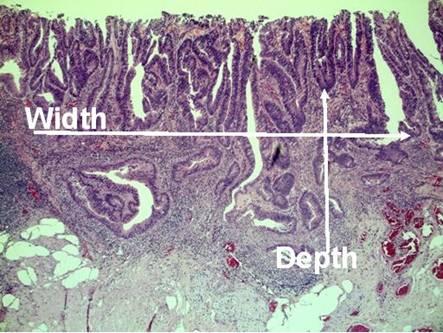 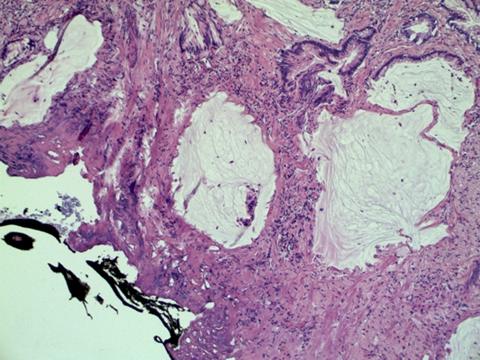 Video 2: The lesion described above is removed by single-piece mucosectomy after submucosal injection of saline to elevate the flat lesion.

Video 3:  Endoloop-assisted polypectomy to prevent bleeding for a 4-cm peduncolated adenoma with a broad stalk.