Of the 255 patients selected, Dr Liao reports that the occurence of treatment failure (TF), defined as either local recurrence or grade ≥ 3 radiation pneumonitis (RP), was no different between those receiving intensity-modulated radiotherapy (IMRT) or 3D proton therapy, (3DPT)  but hightlights that 3DPT offers more targeted dosing, and could spare damage to surrounding tissues.

For more on proton therapy, you can watch an interview with Dr Madhusmita Behara here.


ASCO has accepted my results for a basic randomisation trial comparing proton versus IMRT for non-small cell lung cancer. I got an oral presentation so that’s why I came. Of course I came to ASCO anyway for other meetings.


Could you tell us about the comparison between proton and, for example, scattered therapy?


The comparison group are two, one is what we consider standard of care which is intensity modulated radiation therapy given concurrently with chemotherapy. The comparison or investigation arm is the proton therapy. In this case we used a 3D conformal passively scattered proton for comparison, that was the technology available at the time of the trial design.


And what kind of results did you find from the trial?


The results actually showed that using 3D conformal proton therapy, in terms of the endpoint of the trial which is radiation pneumonitis, the original thought is that the protons will be able to reduce the lung volume irradiated through the treatment and the radiation pneumonitis, however, given the technology delivering protons is 3D conformal, not intensity modulated, we found out actually the 3D conformal proton therapy irradiated a higher volume of the lung with a higher dose compared to IMRT. Therefore actually the pneumonitis rate was slightly higher than we have expected. On the other hand, the IMRT technology has also been improving significantly so the pneumonitis rate actually was nearly 50% less than we expected. So that’s a little bit surprising to us. But the most important finding that is very encouraging from this trial is that both IMRT and the proton are very effective in cancer control, the local failure for the patients at twelve months is only 10% or 11% compared to 25% in the past when we designed the trial. So they are both very powerful treatment options.


What we also found is that in this trial what we did is we developed a pair of plans before we started treatment and we chose only those patients with the two plans comparable or both acceptable in our standard practice and then randomised them; in this case there’s no difference. Then when patients had the plans not randomisable, meaning that one treatment plan is better than the other one, then we treated them with the better plan and we also didn’t find any difference. That would suggest to us that using pre-treatment plan evaluation is a very, very good way to select the patient for either IMRT or proton.


Can you tell us about the categories that you’re using for the pre-select?


For patient eligibility we included the patients with stage 2 to 3b non-small cell lung cancer. We also included the patients who had oligo brain metastases at stage 4 and the patients who actually had surgery in the past and their tumour recurred. So those are very untreatable patients in terms of survival but in our study actually both the proton and the IMRT arm together the median survival time is 28.8 months which actually is identical with the best practice right now published by RTOG-617. In that study the median survival time is 28.7 months. But that study included only untreated patients, stage 2-3, we included heavily previously treated with chemotherapy patients, progressed on the chemotherapy, also patients with stage 4 and recurrent disease. Therefore the survival outcome of this study, either with the proton or IMRT is really pretty encouraging.


You mentioned a difference in effective dose, were there any reports of toxicities or anything in the patient reports that might favour one or the other?


Right now, as I mentioned, the endpoint we used is pneumonitis. In this category we have not seen any difference. Basically there is no difference between those two arms. However, the heart exposure was much, much lower in the proton therapy arm which we believe will probably translate into a survival benefit. Actually we have a translational study and a correlative study going on looking at the cardiac troponin which is a marker when a patient has ischemic change they release through the blood. We’ve found that actually in the proton arm the troponin elevation is much, much less compared to IMRT. Of course those are ongoing studies, we have not even published a paper but we actually submitted the abstract last year to ASTRO.


Looking forwards, how would you like to see these results being incorporated into, say, standard care or are there any upcoming conferences that we might find you at with more results?


Yes, our plan is to get the primary outcome out as soon as possible and then currently we are collaborating with all our colleagues from all over the world to help us to analyse the tonnes of data accumulated from this trial. 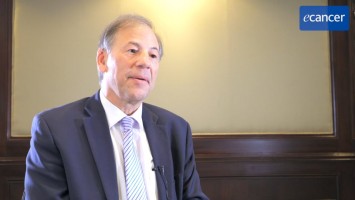