Dr Johanna Bendell talks to ecancertv at the 14th World Congress on Gastrointestinal Cancer in Barcelona.

In the interview, Dr Bendell discusses the findings of the X-PECT study, a phase III trial investigating the use perifosine in combination with capecitabine for the treatment of refractory metastatic colorectal cancer (mCRC).

Dr Bendell notes that the findings are disappointing, as perifosine targets tumour cells via a different pathway to other drugs such as bevacizumab. Further development of this drug is unlikely unless biomarker studies identify any subgroups of patients that might benefit.

What data are you presenting here at ESMO 14th WCGC?

Today I’m actually going to be presenting data from a randomised phase III study called the X-PECT study which was a study for patients with refractory metastatic colorectal cancer where we randomised patients to capecitabine plus a drug called perifosine, which is an AKT inhibitor, versus placebo plus capecitabine. Unfortunately, for this randomised phase III study the results were negative, showing no improvement in survival or progression free survival adding perifosine to capecitabine for these patients. Interestingly, there was a subgroup of patients who had never progressed on oxaliplatin and who were KRAS wild-type but actually seemed to potentially benefit from this treatment. So we’re looking further into these patients to see from biomarker studies if there is something we can identify from those patients in particular that might have had a true benefit and why they might have had a true benefit.

For those unfamiliar with perfosine, can you tell us about this novel agent?

Perifosine is an oral alkylphospholipid and what it does is it actually intercalates into the cellular membrane causing a number of downstream effects. The first thing that it does and what it’s primarily known for is to block AKT which is part of the PI3 kinase AKT mTOR pathway. We also see subsequent up-regulation of NF-kappaB, which is a major resistance pathway for fluorouracil, as well as a number of other downstream activities including cell cycle arrest and increase in apoptosis.

What are the clinical impacts of the X-PECT results?

Right now what we’ve seen is actually a disappointment. This was a trial for patients with colorectal cancer where we’re hoping to break into a new type of targeted agent. So far we’ve only seen positive data from agents that block angiogenesis and agents that block the EGFR pathway and what we were really hoping is that we’d be able to block a new pathway to give our colorectal cancer patients some new hopes and new targets. Unfortunately, this trial didn’t work but I think what we did learn from this trial is that there might be some patients where it potentially could work, a blockage of the PI3 kinase AKT pathway could potentially work. What we need to do and what we’ve learned from this study is that we do need to incorporate biomarker studies into all of the large randomised clinical trials so that if there is a subset of patients that seems to benefit we can try to figure out why.

What about using perifosine in combination with other agents?

One of our thoughts is that, given that the patient population that seemed to benefit was the patient population that did not have progression on oxaliplatin and who were KRAS wild-type, one thought was that should we have used it in an earlier line of therapy or potentially in combination with other chemotherapies. Right now, within colorectal cancer, this particular drug is not going to be developed any further unless the biomarker studies show us something significant. But I do think that for other PI3 kinase and AKT pathway inhibitors, potentially this gives us some sort of hint that maybe we should look a little bit earlier and definitely again do early biomarker studies to identify who will benefit.

Data on another multi-targeted agent, regorafenib, have shown a benefit in the refractory treatment setting. Could you comment on the X-PECT data in light of those findings?

This was actually a refractory trial so this was third and fourth line, potentially even more refractory than the regorafenib trial, just because this trial was done under an FDA special protocol assessment and so we were required to have patients who had had progression on every single potential agent possible. That way we knew that we were getting patients who had seen everything they could possibly see for colorectal cancer.

What other data at this meeting have been of interest?

Looking at colorectal cancer, we did see a couple of positive studies, as you referred to the CORRECT trial we were very excited to see a new agent coming for patients with colorectal cancer. This was patients with refractory colorectal cancer who were randomised to either regorafenib versus best supportive care. We did see an improvement in survival using regorafenib versus best supportive care and I do know within the United States the FDA is going to do an accelerated review of regorafenib and hopefully will be available for patients very soon. Then we also had data from the VELOUR study where we saw data presented a year ago at this very meeting and have seen updated data since then which is another anti-angiogenic agent used in the second line in combination with chemotherapy. This study was also positive for patients with second line colorectal cancer showing an overall survival benefit. I think what we’re really learning here in addition to a study called the TML study, which looked at continuation of bevacizumab past first line progression into the second line, also showing a survival benefit. The continuation of anti-angiogenic agents throughout treatment for patients with metastatic colorectal cancer is probably a good thing and I think that’s a very important lesson for us to learn.

What further research are you doing or needs to be done?

What we need to do is concentrate on trying to find other pathways we can target for patients with colorectal cancer. There are several pathways that are up and coming, one in particular is the cMET pathway, and we actually saw a poster at this year’s ASCO using the cMET inhibitor ARQ197, or tivantinib, in combination with cetuximab and irinotecan. This is data from a phase I study that then led into a randomised phase II study. We’re still waiting for data from the randomised phase II study but what we did see is that for patients who received tivantinib plus cetuximab plus irinotecan in the phase I setting, we saw a 33% response rate with one complete response which is very different than we are typically used to seeing with cetuximab and irinotecan alone in a refractory population. So we’ve become very excited that the MET pathway might be something to target in the future. There are trials on-going also with MET in combination with bevacizumab as well, so trying to get some new pathways, new targets, for our patients with colorectal cancer.

Right now, what can clinicians do with all these agents?

Right now we still have the same targeted agents, possibly two new ones with aflibercept and regorafenib, but the general themes that we’re learning to do now is to use anti-angiogenic agents in patients where they’re candidates for anti-angiogenic agents and continue those agents through progression, through the continuum of treatment for their metastatic colorectal cancer. We’re still working with the EGFR inhibitors, still for patients with KRAS wild-type status and we’re still learning a little bit more about whether or not there might be subgroups of KRAS mutant patients that would also benefit from EGFR inhibitors. So for now we continue to do what we’re doing, potentially use anti-angiogenic agents a little bit more, and really try to accrue patients to trials of new agents and new ways to target. 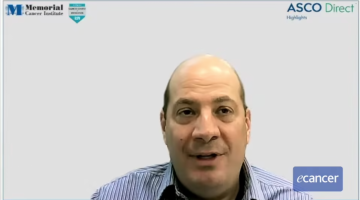 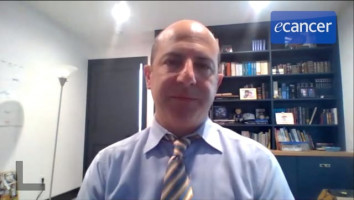 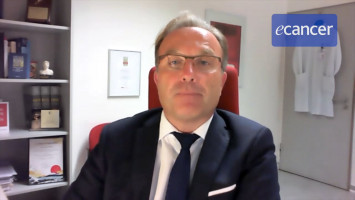