New drug therapies, dedicated specialists and desperately-ill patients—but who will fly the flag for service developments in lung cancer as NHS budgets come under pressure?

The challenge facing lung cancer specialists in the UK is daunting. While good progress is being made in some areas of management, the level of improvement in others is less impressive. Indeed, only 51% of lung cancer patients currently receive any kind of active treatment. In some Trusts, it is less than 10%.

Investment in lung cancer is clearly disproportionate to the money spent on investigating its causes and that invested in potential therapeutic interventions. It is implicated in 22% of all cancer-related deaths in the UK, but attracts only 5% of total oncology research funding.

Meanwhile, lung cancer is the second most common cancer in the UK, with nearly 40,000 new cases diagnosed a year, according to the most recently available statistics.

New prescribing strategies based, for example, on the identification of genetic mutations in individual patients and differentiating between squamous and non-squamous histology, may help to make better use of new targeted therapies in the future—and even more cost-effective use of well-established cytotoxic chemotherapy regimens.

Whether or not the NHS will be able or willing to support such initiatives is another question altogether.

These were among the issues that emerged during Oncology Outcomes—Taking Control of Tomorrow, a meeting of oncologists and other health-care professionals with an interest in prescribing and service provision for lung cancer patients, held at the Royal College of Physicians in London on 5 November 2010.

‘We must pay far more attention to the ‘forgotten’ patients’, she insisted. ‘That means those who fall between the two extremes of being referred immediately for curative treatment and those for whom palliative care is the only realistic option’.

For the future, Dame Gill said that priority should be given to greater public awareness of the burden of lung cancer, more effective diagnosis, access to optimum treatments and top-quality specialist follow-up of patients. Meanwhile, lung cancer research should focus on screening patients to identify those most likely to benefit from specific therapeutic options, predictors of success, pulmonary rehabilitation, radiotherapy and better imaging techniques.

Particular attention should be paid in the future, she said, to the identification and measurement of outcomes rather than processes, and listening to what patients actually want. New therapeutic options, specialist training, as well as specific and effective diagnostic tests should be high on the agenda.

In order to address these questions, Dame Gill called for a ‘concerted and aspirational’ approach to delivering services—sharing best practice in order to raise the profile of lung cancer. ‘We need to be able to deliver lung cancer treatment to the level of the best that is currently available’, she concluded (Figure 1). ‘Improving access to diagnosis and early treatment will be the key to this goal’. 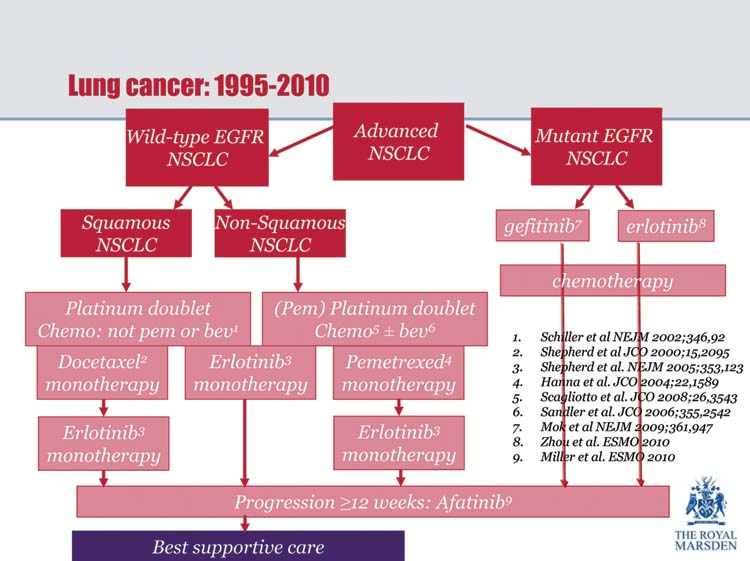 Dr Jesme Fox (Medical Director, Roy Castle Lung Cancer Foundation) drew attention to the fact that one of the main reasons for ambivalent attitudes towards lung cancer is that in countries such as the UK, where fewer people are now smoking, there is little sympathy for sufferers with a disease that is mainly caused by cigarette smoking.

Furthermore, she said, the very nature of lung cancer—either patients who are very ill or who have already died within a short time of being diagnosed—meant that are few patient advocates to advance the lung cancer cause. Dr Fox reported that her own organisation is the only national lung cancer charity registered in the UK—in sharp contrast to the prolific charitable provision enjoyed by other cancers.

Turning to the anticipated squeeze on NHS budgets, Dr Fox said there would be no escaping painful decisions on how best to make savings in order to fund service developments in lung cancer. There might include:

She outlined the RCLCF’s key campaigning priorities, including better research into early detection, efforts to reduce the stigma and negativity associated with lung cancer, access for all patients to lung cancer clinical nurse specialists, ensuring high-quality data collection through the National Lung Cancer Audit, speedier referral to a hospital-based specialist for investigation of suspicious symptoms, and greater equity throughout the UK in terms of early diagnosis, treatment and care.

Professor Nick James (School of Cancer Sciences, University of Birmingham) reported that half of all drugs in clinical trials are for cancer indications. Rapid growth of cancer drug sales was a feature of the late 2000s, resulting in a global market worth $48 billion in 2008. Even biotech companies with no licensed products could be worth many billions of pounds, he said—in the expectation that they would find the key to the latest blockbuster.

The problem, however, was that new cancer drugs were usually only licensed (initially, at least) in end-stage disease—and that although they might improve survival, there was a high price to pay for any clinical benefit.

Despite the Government’s contention that NHS spending is ‘protected’, Professor James warned that in the UK, the National Institute of Health and Clinical Excellence (NICE) is likely to reduce its quality-per-life-year threshold substantially, thereby dashing any hope of adequate spending on new cancer lung cancer drugs in the future.

He pointed out that NICE has no budget for implementing its recommendations, and that during November 2010 doubts were raised about its role in terms of funding the prescribing of new drugs.

‘As it is, the UK currently spends far less on new targeted therapies than other European Union countries—and spending on cancer drugs continues to be driven almost entirely by the use of much older agents in adjuvant and neo-adjuvant settings’, he said.

Professor James added that although NHS spending on cancer drugs multiplied sixfold between 1998 and 2007, and that approvals for new cancer drugs are expected to continue, it was clear that future budget restrictions would soon put a brake on this rate of increase.

It might be possible to save costs by adhering to guideline-driven medicine, better screening and detection, and more effective disease profiling guided by risk-directed management. For the immediate future, the goal would be to improve cure and life prolongation rates in cancer. Nowhere was this need more urgent than in lung cancer, he concluded.

Professor Nicholas Thatcher (Christie Hospital NHS Trust, Manchester) outlined current thinking in terms of first-line therapy for in advanced non-small cell lung cancer (NSCLC). He said that a ‘therapeutic plateau’ had now been reached in terms of chemotherapy for advanced NSCLC—median survival platinum doublet chemotherapy achieving a median survival of 8–10 months in the late 2000s, compared to just 2–5 months in the mid-1970s.

He predicted that in the future, the pathologist would take centre stage in determining which patients would benefit most from specific therapeutic regimens for advanced NSCLC, highlighting the fact that outcomes—even with new targeted therapies such as bevacizumab and gefitinib—differ significantly when a distinction is made between squamous and non-squamous histologies.

Attention was now turning, said Professor Thatcher to first-line clinical trials with conventional therapy in combination with one or more of the new targeted therapies. For example, in studies such as SAiL (Safety of Avastin in Lung) [1] and ARIES (Avastin Registry: Investigation of Effectiveness and Safety) [2], a combination of doublet platinum-based chemotherapy in combination with bevacizumab had achieved consistently high median survival rates of 13.6–14.6 months.

He also cited recent data from IPASS (IRESSA Pan-ASia Study) [3,4], comparing gefitinib with platinum-based doublet chemotherapy in advanced NSCLC, to demonstrate that predictive markers such as activating epidermal growth factor receptor (EGFR) mutations not only determine whether or not a particular intervention has a beneficial impact on conventional endpoints such as progression-free survival (PFS), but importantly on parameters such as quality of life (QoL) and symptom improvement.

‘For patients with lung cancer’, said Professor Thatcher, ‘PFS per se is not necessarily relevant. It is not simply a matter of how long they live without progression, but how well they can expect to enjoy any extra months of life that result from a chosen intervention’.

In IPASS, he reported, significantly more patients with EGFR-positive mutations had sustained and clinically-relevant improvements in terms of QoL and symptom control with gefitinib than with doublet chemotherapy. For patients who were EGFR mutation-negative, the reverse was true.

Professor Thatcher went on to describe a relatively new chemotherapeutic agent, pemetrexed, as a ‘UK success story’ in an era when the UK was still being pilloried for its low lung cancer survival rates. ‘Who would have thought that a cytotoxic drug would have made such a difference in the treatment of advanced NSCLC’, he said.

Dr Marianne Nicolson (Aberdeen Royal Infirmary, Scotland, UK) argued the case for greater use of personalised therapeutic interventions and more discriminating patient selection, with the emphasis on maintenance and second-line treatment for patients with advanced NSCLC.

She reported that during the 2000s, clinical trials involving cytotoxic drugs such as gemcitabine, paclitaxel and docetaxel had all been studied extensively, but had not found favour as candidates for maintenance therapy in routine clinical practice—probably because although significantly longer PFS had been documented, there were only modest improvements in overall survival (OS) as well as increased adverse events and impaired QoL.

‘Are we any better off in the brave new world of targeted drugs?’ asked Dr Nicolson. ‘Maybe not’, she said. She reported the outcomes of a number of trials such as AVAIL (AVAstin in Lung) [5], FLEX (First-Line Erbitux in Lung Cancer) [6], ESCAPE (Evaluation of Sorafenib, Carboplatin And Paclitaxel Efficacy in NSCLC) and WJTOG 0203 [7] where agents such as bevacizumab, cetuximab, sorafenib and gefitinib, respectively, been had been added to conventional chemotherapy in the maintenance setting—all with little evidence of clinical benefit in terms of survival.

In SATURN (Sequential Tarceva in Unresectable NSCLC) [8], however, OS improved in patients receiving maintenance erlotinib who had not progressed on first-line chemotherapy—a benefit seen both in patients with wild-type (normal) and with mutated EGFR status (p = 0.0014 and p = 0.0019, respectively, versus placebo). In squamous patients who had not progressed, the survival benefit was also significant (11.3 months versus 8.3 months for placebo, p = 0.0116).

Finally, Dr Nicolson reported data to suggest that delaying treatment with a chemotherapeutic agent such as docetaxel not only achieves no significant clinical benefit in terms of OS, it also increases the risk of the patient not being fit enough for maintenance therapy [9].

Dr Shah then highlighted impressive clinical activity and rapid symptom relief with crizotinib, a novel inhibitor of another newly-identified molecular marker (EML4-ALK) in patients with NSCLC—especially in never smokers [11]

He also reported a positive impact of early palliative care on QoL, reducing the need for aggressive chemotherapeutic intervention at the end-of-life and improving survival in patients with stage IV NSCLC [12]

Finally, Dr Popat reported encouraging efficacy from the LUX-Lung 1 trial [13] with a new, potent and irreversible EGFR-inhibitor, afatinib, in patients with stage IIIb/IV adenocarcinoma of the lung—improved disease control rate (58% versus 19% compared to placebo) and prolonged PFS (from 3.3 to 1.1 months).

However, as Dr Shah made clear, the future for UK practice in terms of delivery of lung cancer care is likely to become increasingly complex. ‘EGFR and EML4-ALK are just two of a number of molecular markers now on the horizon’, he said. ‘Not only are new targeted therapies becoming available, but there are new chemotherapeutic agents and new indications for old chemotherapy regimens’.

Highlights from interactive keypad voting at the Oncology Outcomes meeting:

New drugs and equity of access to cancer services