Gene expression studies are used as an independent predictive method for prognosis. In cancer genomic studies, tremendous effort has been devoted to pathway-based analysis. Pathway analysis is a promising tool to identify the mechanisms that underlie disease, adaptive physiological compensatory responses and new avenues for investigation. Different pathways have different biological functions. Thus, it is reasonable to study each pathway separately. Among the many pathways, only a few have predictive power for cancer development. Among genes within predictive pathways, there are subsets having small to moderate predictive power, whereas the remaining are noisy genes [1–6].

Genes have the inherent pathway structure, where pathways are composed of multiple genes with coordinated functions. The aim of this study was to identify genetic signatures associated with disease prognosis in bladder cancer with respect to hsa05219 pathway obtained from Kyoto Encyclopedia of Genes and Genomes (KEGG).

Affymetrix gene expression chip was used for their study and the intensity values seen in the data file were log transformed values. One would subtract the control value from the experimental value to find the significant change in expression level. ‘Researchers generally’ use a cut off at least 2-fold change (linear value) between control and experiment to ‘screen significantly differentially expressed genes’.

Affymetrix does not have a certain threshold cut off that it recommends. Researchers in the community have seemed to adopt a value of about 100 (linear) so ~6.65 (log). However, this does not mean that a value of 6.8 is expressed in a sample; this is just a general guideline that many researchers have adopted to filter out a bulk of the probe sets. Most researchers will first analyze the data based on fold change, then filter on intensity when a probe set is <100 in both samples. A change from 3.5 to 4.8 in a sample could very well be just a background, where as a change from 6.0 to 7.4 might be real.

Pathway hsa05219 referring to bladder cancer was selected from KEGG pathway database (section 6.1 cancers http://www.genome.jp/kegg/pathway.html). There are totally 42 genes listed in hsa05219 pathway which are believed to be involved in causing bladder cancer (Tables 1–3).

Table 2:
Displaying affymetrix grades and ID along with T2+ and control mean values 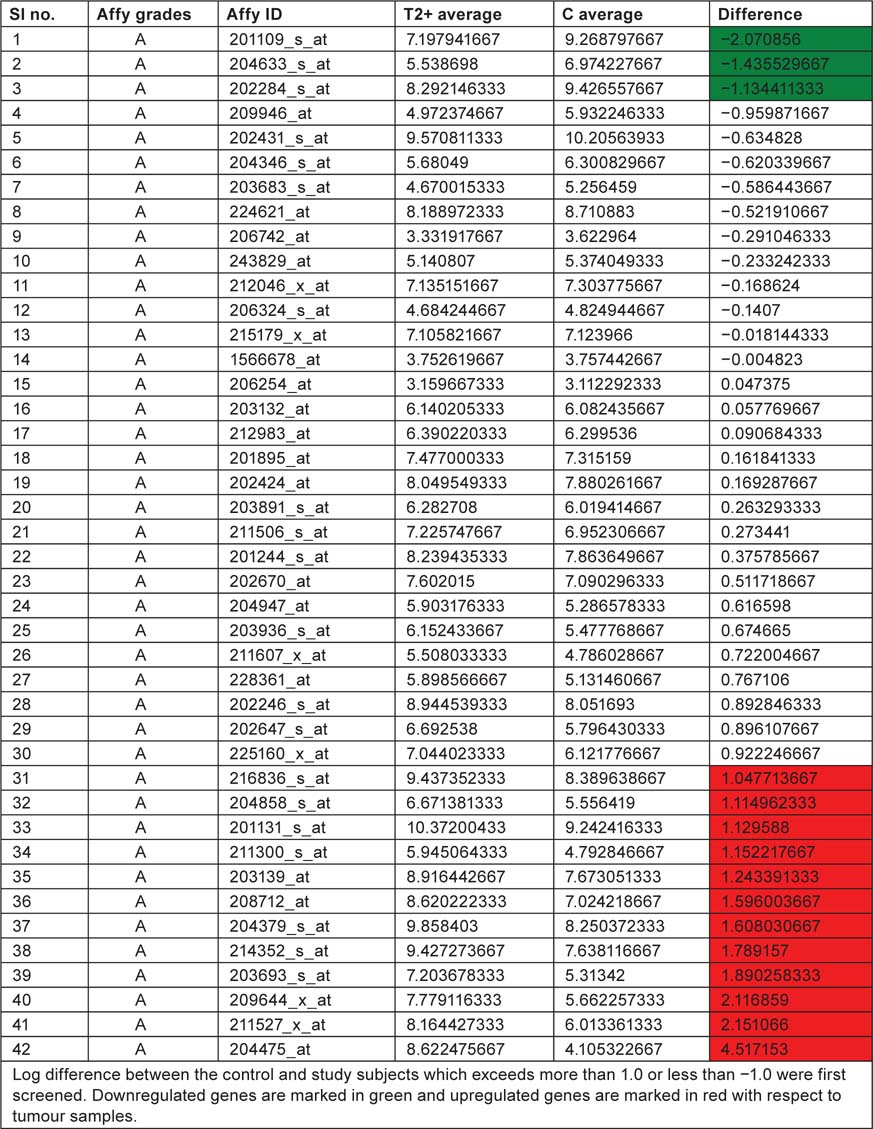 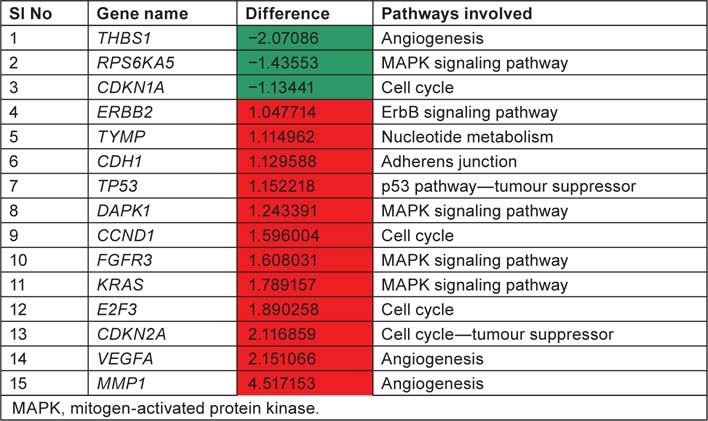 Table 4:
Genes from the hsa05219 pathway involved in different cancers 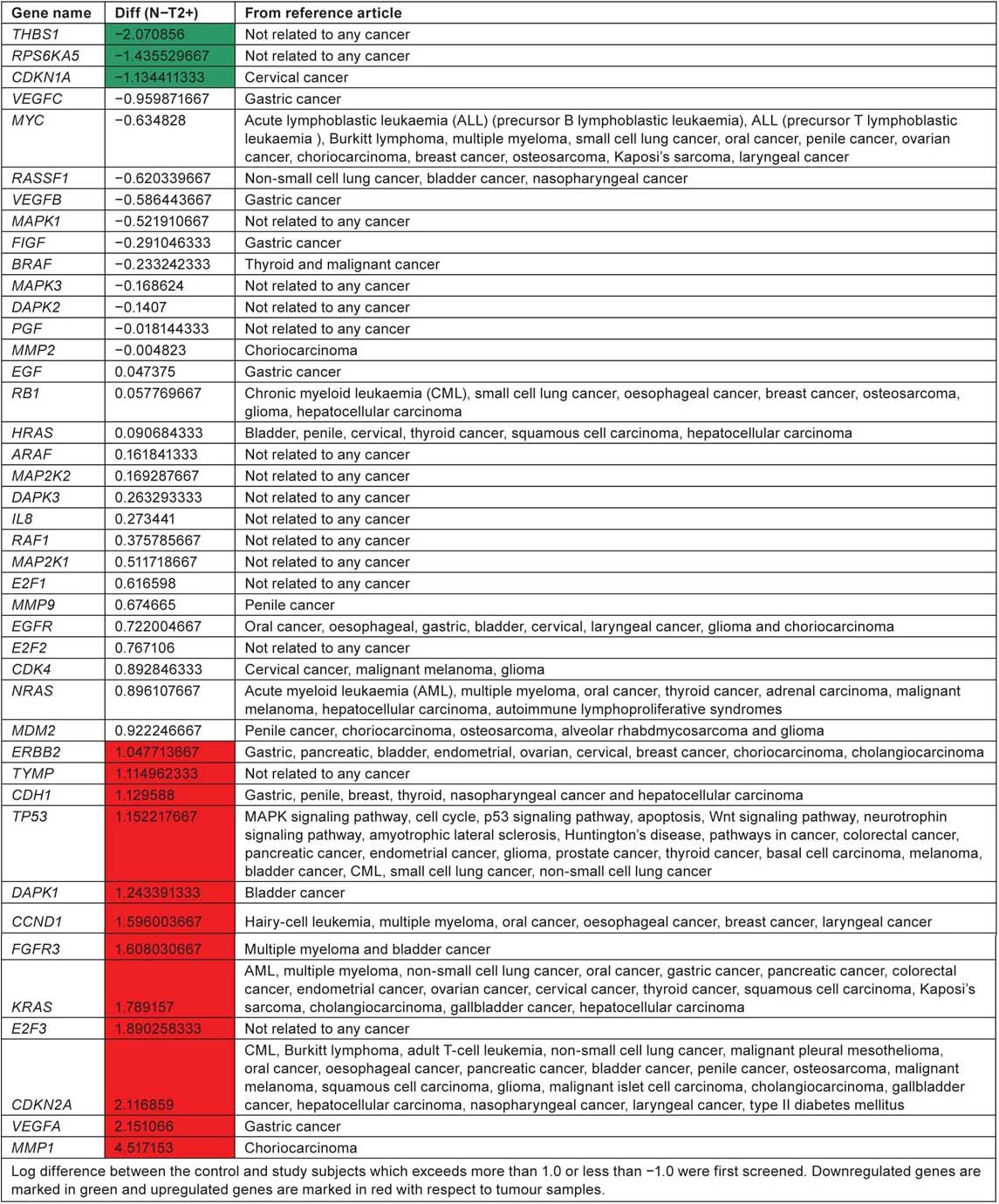 According to KEGG pathway, ‘hsa05219’ for bladder cancer, RB, CDKN2A and p53 are considered as tumour suppressor genes and FGFR3 and HRAS as oncogenes. Two of the tumour suppressor genes CDKN2A and p53 were expressed in significant level when compared with normal tissue samples. FGFR3 which is an oncogene is highly expressed in tumour samples compared to control tissue samples. CDKN2A, p53 and FGFR3 along with the other genes ERBB2, TYMP, CDH1, DAPK1, CCND1, KRAS, E2F3, VEGFA and MMP1 are unregulated in tumour tissue samples. All these genes play an important role in ErbB signaling pathway, nucleotide metabolism, adherens junction, p53 pathway, MAPK signaling pathway, cell cycle and angiogenesis. THBS1, RPS6KA5 and CDKN1A are downregulated in tumour tissue when compared with control tissue samples. Out of the 42 genes listed in the KEGG bladder cancer pathway, only eight genes RASSF1, RB1, HRAS, EGFR, ERBB2, DAPK1, FGFR3 and CDKN2A have reference support to prove their involvement in causing bladder cancer. This current review suggest the lack of research/involvement of the other genes in the pathway to cause bladder cancer. Pathway analysis of affymetrix data file shows upregulation of four genes ERBB2, DAPK1, FGFR3 and CDKN2A which have reference to prove their involvement in causing bladder cancer.