Prof Ian Kunkler speaks to ecancer in an online interview for the virtual SABCS 2020 meeting on the 10-year results from the PRIME II study.

He explains that the study was looking at the omission of radiotherapy following breast conservation surgery in relatively low-risk older patients with HR-positive breast cancer, and whether this has an impact on local recurrence.

Prof Kunkler reports that the study found no difference in the overall survival or risk of metastasis in both groups, although risk of recurrence was higher in the non-radiated group. He concludes by commenting on the potential impact of these findings on current guidelines in the UK and US.

The PRIME II study that we’re presenting are the ten-year results of this trial, which is a trial of relatively low risk, older patients in which there is relatively little level 1 data. We’ve been testing the hypothesis that the omission of radiotherapy after breast conservation may have a relatively modest impact on local recurrence. The background to the study is that this is an international study of 1,326 patients from four countries: from the UK, from Greece, from Australia and Serbia, where patients who had small tumours, 3cm or less, predominantly grade 1 and 2, who are hormone receptor positive, had negative margins, were axillary node negative, and then were randomised to a course of radiotherapy, 40Gy or 50Gy conventionally fractionated, or to no radiotherapy, and then were followed up. We presented, five years ago, the five-year results of the trial which showed a local recurrence rate reduced from 4.1% in the non-irradiated group to 1.3% in the irradiated group. Many investigators have been interested in the long-term results of the trial to provide reassurance that it would be safe to provide a no-radiotherapy option to selected patients.

In the ten-year results, the risk of recurrence in the irradiated group is 0.9%, and in the non-irradiated group 9.8%, an absolute reduction in recurrence of 8.9%. We’ve looked at the overall survival of the patients and there is no difference in the overall survival between the two groups, and there is no difference in the risk of metastases, so those are important findings. We looked also at the causes of death, and in this age group there are clearly competing risks of non-breast cancer mortality. We found that only 6.6% of the deaths were due to breast cancer, so most of these patients were dying from non-breast cancer causes, including cardiovascular deaths.

What we have to think about are what the implications of these findings are for clinical practice. Within the UK, guidelines on omission of radiotherapy developed by the National Institute for Care and Clinical Excellence have been influenced by the five-year results of the trial. So, after breast-conserving therapy in patients 65 years or older, patients with tumours up to 2cm and grade 1 and 2 who are hormone receptor positive, have clear margins and going to receive adjuvant endocrine therapy can be considered for the omission of radiotherapy as an option.

In the United States, by contrast, the usage of radiotherapy in this age group still remains quite high, I think reflects conservative views among the breast cancer community. So I hope that these results at ten years provide some reassurance that although there is a persistent risk of recurrence in the non-irradiated group, that risk of recurrence would be considered acceptable and, importantly, there is no compromise in terms of overall survival or increased risk of metastases. 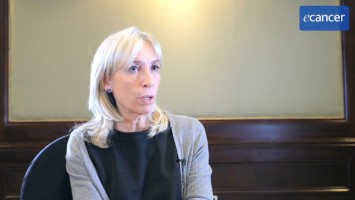