Prof. Hoskin presents, at a press conference at ASCO 2017, findings from a phase III clinical trial showing that a single radiation treatment is as effective as a full week of radiation.

Thank you and thank you for the opportunity to present this study which is a comparison of two radiation doses, a single dose and a multi-fraction dose delivered over one week for these patients with metastatic spinal cord compression.

As you’ve heard, spinal cord compression is a common complication of metastatic cancer. We see 4,000-5,000 cases a year in the United Kingdom and the majority of those patients are treated with radiotherapy. A small number will have surgery for specific indications but the majority receive radiotherapy, the indications for radiotherapy being to improve neurological function, to maintain mobility and to relieve pain. There’s no standard radiotherapy schedule, a whole range of radiation doses are used internationally from single doses of 8-10Gy ranging up to four weeks of treatment delivering 40Gy. So we conducted this trial to show whether a single dose of radiation was as effective as multiple doses without compromising patient outcomes.

The trial design was a prospective randomised trial, it was a non-inferiority design and ultimately we randomised 688 eligible patients. They were stratified by radiotherapy centre, the ambulation status at randomisation, primary tumour type and whether patients had extra-skeletal metastases as well as skeletal metastases. One to one randomisation, the control arm was 20Gy delivered over one week, five fractions, and the investigational arm was a single dose of 8Gy. We measured ambulatory status, bladder and bowel function, adverse events and quality of life and these were undertaken at baseline, one week, four weeks, eight weeks and twelve weeks post-randomisation.

Ambulatory status was categorised by an objective four point scale. You see here categories one and two were patients who were ambulant with or without walking aids; category three was patients unable to ambulate but still having some power in the lower limbs and category four were patients with flaccid paraplegia. Bowel and bladder function was simply dichotomised to normal and abnormal and adverse events were scored by standard scoring scales RTOG and CTCAE.

Here you see the headline results, this is the ambulatory status at eight weeks which was the primary endpoint of the study. If you look at the right hand column you’ll see that in terms of conventional significance at none of these time points was any change in neurological function statistically significantly different between the single dose of radiation and the weekly five fractions. If we look at those patients who presented with ambulation, patients who could walk at presentation, you see here absolutely no difference between a single dose and a week of treatment and approximately two-thirds of those patients being enabled to maintain their ambulation. The overall positive response at eight weeks, the number of patients who could walk, was 73% and 69%, again statistically non-significant. In terms of the non-inferiority design the defined lower limit for non-inferiority was -11% and we’re just approaching that in the difference between the risks.

In conclusion, a single dose of 8Gy is as effective as 20Gy in five fractions for a range of clinically relevant endpoints, in particular ambulatory status, both at eight weeks and, indeed, at all time points between one week and twelve weeks in terms of overall survival, and I’ve not presented the data but also in terms of bladder and bowel function, retreatment rates and adverse events. It shows that early diagnosis is important for best outcomes – patients who arrive ambulant with either a single dose of radiation or multiple doses will retain that ambulation in almost 70%. A single dose of radiotherapy in our minds is now recommended in this setting, it has major advantages for these patients. The important thing to realise being that these patients have a very short survival, their median survival in this study was only 13 weeks. A single dose has enormous advantages in those patients with very short survival times and, of course, it is increasingly cost effective. Thank you. 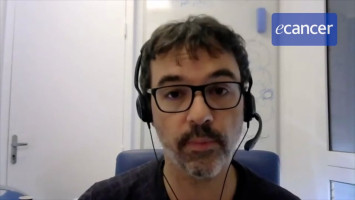