Discussion focuses on the need for precision medicine and highlights a university of Chicago phase II consortium trial – A ramdomised ETS gene fusion stratified trial of abiraterone prednisone /- the PARP1 inhibitor veliparib for metastatic castration-resistant prostate cancer and shares some encouraging data for patients with a DNA repair gene mutation.


GM: Welcome to ASCO, Chicago, where all the action is. I’m Gordon McVie, editor of ecancer, and I have here with me Dr Twardowski who is from City of Hope in California and he’s a medical oncologist and he knows an awful lot about prostate cancer. He’s going to tell us really what’s happening in prostate cancer out there but also what’s happening at ASCO and where the exciting trends are and where we should be this time next year at the next ASCO. Thank you very much indeed for coming along and telling us a little bit about it. So what does prostate cancer look like from California?


PT: Thank you for inviting me, Dr McVie. It’s a very dynamic field like the whole of oncology. As you may know, there are six or seven new drugs have been approved in the last ten years in prostate cancer, especially in the last few years. The recurrent theme in prostate cancer is still the refinement of hormonal therapy; so even though hormonal therapy, the concept, goes back to the 1940s, a very long time ago, but we’re still finding the importance of it in the progression of prostate cancer and how to interfere with hormonal pathways. It’s really still the main focus of therapy for advanced disease. So there are several agents that have been approved from that class in the last few years – abiraterone is one of them, enzalutamide is another one, so they are more potent inhibitors of the androgen signalling pathway. And there are several other agents in development. So we still probably haven’t heard the end of the story of hormone inhibition in the treatment of prostate cancer.


But, of course, that’s not the whole story. There is also a resurgence or, if you will, a renaissance of chemotherapy in prostate cancer. There is very compelling data that is re-emphasised in this meeting of the importance of early institutions of chemotherapy in patients who present with wide-spread metastatic prostate cancer. This is a relatively new concept, within the last year or two. We used to reserve chemotherapy in the past for more advanced refractory resistant cases, kind of at the end of the road; right now it seems that if you really incorporate it early in the treatment of advanced disease you get a lot of benefit out of it.


GM: So we medical oncologists are coming into the game a little bit earlier rather than after everything else has failed. This is going to require a bit of a change in the way that the urologists who do most of the decision-making in prostate cancer are going to handle this.


PT: Absolutely, I totally agree, I couldn’t agree more. Because of all these new developments I think it’s really critical that medical oncologists, ideally the ones who have experience dealing with prostate cancer, are involved because of these many new drugs that are on the market right now. In terms of specific developments in this meeting, there’s definitely more and more emphasis on better patient selection for specific treatments. One of the weaknesses of the prostate cancer field in general, in terms of treatment of advanced disease, when you compare it to other tumour types like lung, colon, breast cancer, that we really don’t select patients well for specific therapies like we do in breast cancer.


GM: So you’re not doing precision medicine yet?


PT: There’s no precision medicine really practised. So everybody essentially gets the same treatment and that’s totally not the case in breast, colon, lung where you have the very specifically defined molecular subsets. So that’s one of the major thrusts of new research in prostate cancer to change that.


GM: You’re actually in part of a group consortium, the Chicago Cancer Consortium, and you’re involved in a really interesting project which is presented here and you’ve been looking at resistance to androgen suppression by looking at the bypass mechanisms that cancer cells are very good at and you’ve found PARP as a great partner. But just before we get on to that you’re talking about salami slicing the prostate cancer and you’ve actually got a biomarker for this study – ETS fusion. Tell me what’s ETS fusion.


PT: ETS stands for E26, it’s essentially a group of transcription factors, there are 26 of them in that particular cluster that are involved in activation of various genes. It turns out that this ETS transcription factor can be fused to a protein or gene called TMPRSS2 which is hormonally driven. So if you have those two ETS gene and TMPRSS fused together it tends to provide enhanced activation or growth of prostate cancer cells. It seems that they are about 30-50% of the prostate cancer cells that have that fusion and that may have implications both prognostically and in terms of response to various therapies.


GM: So you designed this trial using that as a first factor to be looked at. You biopsied all your patients, 150 patients something like that, and you used abiraterone prednisolone and you added yes or no PARP inhibitor.


GM: Veliparib, and that’s really interesting. What’s it looking like so far in the data?


PT: The data looks very interesting. It’s going to be presented by Dr Maha Hussain who is the lead author, I was a major collaborator in this study. One of the interesting findings, first of all it was a very, very difficult study to do because every patient had to have biopsy of metastatic site in order to assess for the presence of that ETS fusion protein. As you know, prostate cancer tends to metastasise to bone so those are not easy and, surprisingly and fortunately, we were very successful in obtaining more than 80% of patients that we tried, we got appropriate adequate tumour samples that we were able to assess. So the data looks very, very interesting. On the one hand slight disappointment in the sense that we were thinking that patients who harboured that fusion protein will respond better to abiraterone, especially in combination with this PARP inhibitor veliparib. It doesn’t seem to be the case, it seems like the response is about the same regardless. However, there is a silver lining because in addition to this assessment for ETS protein we were also able to look for in a more detailed way, using genomic sequencing, for various genes that are involved in DNA repair. That is also emerging as a very interesting area in prostate cancer because it turns out that a lot of prostate cancers also have abnormalities in the DNA repair genes and that, in fact, may predict response to veliparib, to a PARP inhibitor. So we are finding that in fact the patients who have the DNA repair gene mutations or abnormalities, which are about 25%, absolutely seem to respond significantly better to veliparib and in general, frankly, to abiraterone based therapy. So that’s the main thrust. So that’s one of the studies that seems to indicate that there is a biomarker out there that we can look at and perhaps that has prognostic but also predictive implications for types of therapy.


GM: You’ve got two biomarkers, you’ve got one that will tell you what abiraterone will do and it’s high numbers, 80% or thereabouts, and you’ve got a DNA repair. You’re looking at something like ten different DNA repair sites in this study. This seems to appeal to me as an academic as the way to go to address the problem that you had that prostate cancer patients get treated as if they’re all the same and that’s no longer the case in lung and breast. You’re making a big step forward in that.


PT: I think so; we are very excited. And, in fact, based on this study and a couple of others that were in fact developed and executed in the UK, that’s one of the major areas of development, drug development, in prostate cancer. So there are studies in planning in which the patients with advanced prostate cancer frankly who have failed several lines of therapy and are maybe running out of options would be tested for the presence of these DNA repair genes and if that is present the PARP inhibitor of some sort will be a component of therapy or perhaps even a single agent. There is emerging other data, not just from our study, from other centres, that that’s probably the right strategy to pursue.


GM: The lesson we’ve learned from lung and breast and so on is, however, that one targeted drug could not be the solution down the line. So essentially you’re ahead of that game in prostate because you’re looking at a combination straight off. Is this the way it’s going to go, do you think? Think of the other drugs, the seven or eight that are in the pipeline, we’ve got to work out how we’re going to put them together in the best way.


PT: I think so and I would mention from ASCO and recent literature the other pathway that is generating a lot of interest is the AKT pathway. That seems to be another redundant pathway that takes over over time when you supress the hormonal pathway of growth. So there are efforts in development how to block the AKT pathway. What is also exciting about it is that there seems to be a biomarker that predicts when the AKT pathway is activated and specifically there’s one protein called PTN or gene, tumour suppressor gene, if that’s lacking that tends to activate the AKT pathway. So that would be the kind of patient that we would select based on that for clinical trial or treatment with an AKT inhibitor, either alone or in conjunction with hormone therapy. So, again, another example of a precision approach that is in the workings.


GM: It’s all very exciting. Predictions for this time next year?


GM: So it could be PTEN, it could be AKT, it could be ETS. Fancy calling something E26. Dr Twardowski, thank you so much for giving us your insight into ASCO Chicago 2016, really appreciate it.


PT: Thank you very much, it was my pleasure.

18 Feb 2021
What is global oncology and what is the presence of global oncology in Europe
Prof Cristina Stefan - Institute of Oncology 'Prof Dr Alexandru Trestioreanu', B... 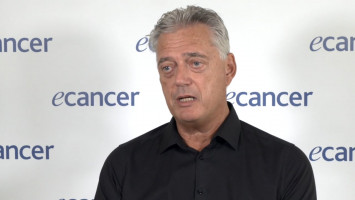