Dr Harris talks to ecancertv at SABCS 2015, about his research on APOBEC3B and its correlation to drug resistance in breast cancer.

APOBEC, particularly APOBEC3B is a brand new source of mutation in cancer, he observes. Infection with the human papillomavirus (HPV) has been shown to account for upregulation of APOBEC3B in cervical and head/ and neck cancers but it is not clear how it becomes changed in on-viral malignancies such as breast cancer.

Dr Harris discusses data that show that upregulation in breast cancer may occur via the PKC-NFκB pathway. These data establish the first mechanistic link between APOBEC3B and a common signal transduction pathway, he says, suggesting that using inhibitors that target this pathway may be of benefit.

ecancer's filming at SABCS 2015 has been kindly supported by Novartis through the ECMS Foundation. ecancer is editorially independent and there is no influence over content.

APOBEC is a now brand new source of mutation in cancer. So prior to a couple of years ago we knew that mutations were important in cancer and we just assumed that they were happening, spontaneous events that were uncontrollable. But since then we’ve learned that one enzyme, at least one enzyme, called APOBEC3B in particular is contributing a lot of these mutations to breast cancer. So our current studies are directed towards addressing does this have any effect on the tumour? Are all of these mutations just happening with no real clinical effect or are they contributing to ongoing tumour evolution and heterogeneity. So what we’ve been able to do, it’s a two part study in collaboration with John Marten’s group at Erasmus in Holland, and the first part is a clinical study to ask if high levels of APOBEC3B in breast tumours correlate with poorer outcomes. So the answer is they do. And then the second part of the study was asking do high levels of APOBEC3B correlate with resistance to therapy. So we were able to address that by looking at essentially a historical retrospective dataset from Holland where they had procured these tumours at diagnosis, essentially, and then followed the patients for some time and upon tumour recurrence they received tamoxifen monotherapy. Those whose original tumours had high levels of APOBEC3B did much more poorly on the monotherapy than those whose tumours had low levels of APOBEC3B, consistent with this enzyme being an ongoing source of mutation in those tumours.

So then we wanted to do in parallel to that prove essentially cause and effect experiment. So we want to ask if APOBEC3B is important for drug resistance in an animal model. The clinical data so far have been correlative. So we were able to do that by taking a human breast cancer cell line that’s oestrogen dependent, so it’s ER positive, and it forms tumours in xenograft mouse models and essentially then one can look at tumour formation in the presence and absence of APOBEC3B by systematically knocking it down with a short hairpin RNA. Then, of course, break up the groups such that one can have tamoxifen treated and tamoxifen not treated. So by following these different subgroups of this animal xenograft cohort we can ask if APOBEC3B is contributing to drug resistance in an animal model.

So consistent with the clinical data… First, let me describe the model. In the absence of any treatment these human cell lines grow into large tumour masses in the animals. When one treats with tamoxifen, just like many human ER positive breast cancers that are treated with hormone therapies resistance happens or recurrence occurs. So in these animal models the same thing happens, the cells become resistant to tamoxifen and they grow into large tumour masses. In most of the animals this happens but if you knock down this one single gene that’s producing this DNA mutating enzyme, APOBEC3B, you can prolong the tamoxifen therapy for almost the duration of the life of the animals. So we can make resistance happen much more slowly in this animal model. So when you put the human clinical data together with the animal data, the xenograft data, what we’re demonstrating is that this one source of mutation can be altered and that by altering that source of mutation, by stopping it or slowing it, we can alter the fate of the therapy, we can improve the therapy.

What about other types of tumours?

Those are next steps, so to look at other tumours obviously one needs the right clinical dataset. So currently retrospective datsets are best because we can go back into the freezers and essentially retrospectively ask what were the levels of this enzyme in those primary tumours and then ask how did that correlate with outcome. So one should be doing that for other therapies and also other cancers. So APOBEC3B is not just breast cancer specific, it’s a broad acting mutagen in many different human cancers.

Is it a DNA damaging agent?

So APOBEC3B is a natural human enzyme that normally functions as part of an innate antiviral defence. So our bodies have a variety of antiviral mechanisms that are in-built, part of our innate immune response, and the APOBEC enzymes, there’s a large family of eleven of these enzymes, form an overlapping innate immune defence. That’s in addition to our adaptive immune defences. So APOBEC3B is one of these antiviral enzymes that becomes dysregulated in tumours, upregulated. So in terms of other treatments and other tumours, those are all next steps. They need to be done. 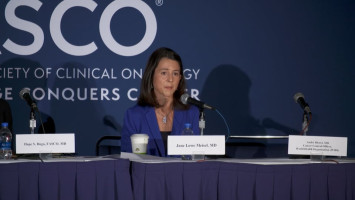