Observational RASTER study on the 70-gene-signature

Dr Caroline Drukker talks to ecancer at the 2013 European Cancer Congress in Amsterdam about the RASTER study and the 70-gene-signature testing.

The test and study looked at the 70 genes associated with breast cancer and metastasis. The aim of the study was to observe the feasibility of conducting this test in a large; community-based hospital while preventing distant recurrence of breast cancer.

Observational RASTER study on the 70-gene-signature

Hi Caroline, thanks so much for meeting with us here at the ECC. You’re here presenting data about the RASTER study but first of all maybe you can explain to me what you mean by the 70-gene-signature?

And so what was the aim of this study then?

The primary aim was to see if it was feasible to have 70-gene-signatures performed in community based hospitals in the Netherlands. So patients were not randomised, it was just an observational trial but this was the first study where we provided patients with a 70-gene-signature result at the time of the surgery so they knew their 70-gene-signature results when they were deciding, together with their doctors, whether or not they would be treated with adjuvant chemotherapy.

And you were comparing the 70-gene-signature with Dutch guidelines, weren’t you?

So put this into context for me, then, what does that mean in the real world?

Which can make a real difference for those people’s quality of life. So what kind of impact could this be making as of now, then?

And can this also translate to other countries around the world?

Yes, yes. We already published the results of the RASTER compared to Adjuvant Online, that was published the beginning of this year in the International Journal of Cancer and that showed similar results for other guidelines and for other risk estimation tools.

So what’s your bottom line take home message, then, for practising clinicians now?

Start using the 70-gene-signature to help you decide whether or not a patient will benefit from adjuvant chemotherapy, especially for those patients where the guidelines are not decisive at this point. 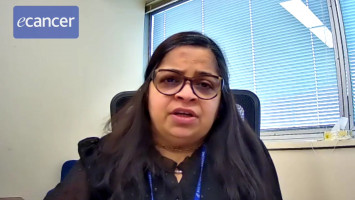