Dr Solange Peters talks with ecancer about ETOP's current projects, including  three new clinical trials, as well as updates on three ongoing trials that center around the platform.

The ETOP platform aims to improve collaboration in clinical and translational research in lung cancer and mesothelioma.

ecancer's filming at EMCTO has been kindly supported by Amgen through the ECMS Foundation. ecancer is editorially independent and there is no influence over content.

ETOP is a new organisation and planning, having been able to start three different trials and planning to open three new trials this year. Maybe I will tell you a bit more about those three which are on-going?

Well yes. Now, you’ve got one looking at biomarkers, haven’t you, looking at retrospective tissues? What are you finding there and why is it different from what has gone before?

That’s right, it’s a good question. For example, the Americans have produced lots of biomarker data; the difference in what we have created is that we work with colleagues having collected very important pieces of tissue so enough tumour to make subsequent several biomarker testing and all these tumours are clinically annotated. So we know everything about the patient but we also know everything about the tumour and the outcome. The idea is to generate hypotheses about the importance of the biomarker in the biology of the tumour and then to bring the data to the community to be able to create new trials, new targeted agents and driven trials and so on and so forth.

That really justifies the sound practice of keeping good data records, doesn’t it?

Exactly. We were very interested in seeing that when we had to survey our friends and colleagues to ask, “Do you have this minimal set of data in your institution available for us?” some centres do not have this clinical data. So we really have to reinforce it.

We won’t name them.

No names but you really have to have this kind of data because it helps us in the future to know what is important for the tumour biology.

Indeed, there seems to be so much promise from this biomarker area that it has become extremely important to get all the data together. But there’s another one that’s puzzling me a little bit – you’re looking at EGFR in a prospective study but you’re using an anti-VEGF agent. Tell me what’s going on there.

We work with the Spanish Lung Group, you know, the ones who have discovered all the EGFR mutations and are working on that, Rafael Rosell and colleagues. We are looking prospectively at treating EGFR mutated patients harbouring an activating mutation with Tarceva, erlotinib, plus bevacizumab, the anti-VEGF agent. The idea is that Rafael Rosell and colleagues have shown that in addition to the activating mutation, half of the patients already at baseline harbour the resistance mutation, in little cells in little clones of tumours, but the resistance mutation is already present and detectable in half of these patients.

To erlotinib. And it was shown in pre-clinical models that one of the ways to revert this resistance, or at least the appearance of resistance, is to add an anti-angiogenic agent in these patients. So doing that we hope to prolong the PFS in this population of patients.

Now is that theoretical or empirical that you’ve made that decision? A bit of both?

Well, it’s empirical; we have to prove it. But what will be interesting is that for every single patient we will have serum at several time points, we will have the tissue in large amounts, so this will be proven also and will help us to describe all the biomarker landscape for this tumour.

Now, when your first line treatment for lung cancer doesn’t work you need a second line and you’re looking at something called the proteomic signature. Is that right?

Yes, the proteomic signature is called VeriStrat, it’s just a drop of blood that you send to the US. It’s a company called Biodesix which make a profile of different proteins and has the signature, having shown retrospectively, to predict erlotinib efficacy. Erlotinib is one of the options but nobody knows how to choose the options, they are all equivalent. So this signature might help you to choose erlotinib if really it’s validated. But, like everything in nature, if you have some hypotheses coming from retrospective data you have to prove the concept prospectively with, of course, balanced data, a balanced group of patients and so on. So this is a prospective validation of the signatures that we are doing.

So what is different about ETOP as compared with other organisations for conducting trials?

I would say maybe three things. First of all we are a closed group of collaborators and friends willing to work together with lots of energy. These are about forty centres in Europe, one in the US, one in China; we meet every month and we really make it move like a group of friends will have an initiative. The second thing is flexibility. We don’t have any rules regarding how much a company can be involved. We don’t have fixed rules, administrative rules, we just want science to move. So the idea and the only condition to propose a trial to the ETOP is to have a relevant scientific question. Once the scientific question is here, then you can find a way to address the question.

You’ve definitely sold me on the whole idea of ETOP but what would you like doctors to do?

Very importantly, most of the countries in Europe are involved in ETOP through some centres and we need additional centres. So all the doctors working in centres who are interested to take part in clinical trials and also creating ideas, because we need new proposals and so on, should join ETOP. Everybody is welcome and it’s really an initiative that has to rely on a large number of people and expertise. So I think that doctors should approach ETOP and try to get involved in a manner and they’re the ones to increase our recruitment possibilities in the future.

And apart from doing exciting and fascinating work, how much do you hope this will advance the case of improving outcomes in thoracic oncology?

I think in thoracic oncology the main problem and limitations we have now is in order to show that we can improve outcome we have to look at very small subpopulations of patients with, for example, mutations that are interesting but it’s 2%, 1% of the patients and so on. So there is no way to make real progress if we don’t work together. So I would say initiatives like ETOP are the only ones which will be able to show that we have new options of treatment because we need all these centres to be able, for example, to identify thirty patients and treat them and so on. There is no other way to move, I guess.

So finally, what is your word to doctors everywhere treating patients with lung cancer?

I would say for every doctor is the word about common effort. ETOP, like this meeting, is organising lots of meetings which are also platforms when we can meet, we can try to find common points of view and common initiatives and then try to make the effort to work a clinical trial but also create a registry. We can create a registry about rare mutations about rare mutation history and so on, and put all the data together in order to make the science move, not in my centre but throughout Europe and, who knows, maybe one day throughout other continents too.

Solange, thank you for talking with ecancer.tv. 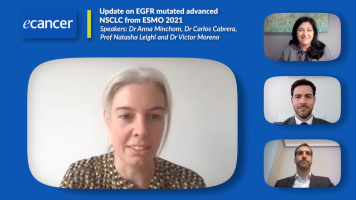 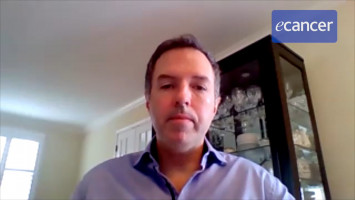