Prof Beral discusses how lifestyle interacts with genes to alter the risk of breast cancer. She notes that the over riding factor in the risk of breast cancer is pregnancy, which lowers the risk of many cancers. Resarch is needed to develop a vaccine that simulates the hormonal impact of a pregnancy to lower breast cancer risk across developed countries. Less developed countries tend to have lower breast cancer rates due to younger and more frequent pregnancy rates. Prof Beral also covers her message to clinicians at EBCC 8: That pregnancy aside, exercise, diet and lifestyle have less impact on risk than is generally thought and in many cases it comes down to chance.

I’m going to give a talk about why breast cancer is very common in Europe but uncommon now in developing countries and point out that much of the difference is because of childbearing patterns because in developing countries, until recently, women had lots of children and breastfed them for a long time and that gives quite a substantial reduction in breast cancer risk. In Europe, where women have few children, don’t breastfeed for long, that’s the main reason why rates are very high in Europe.

I’m also going to talk about why some women in Europe, given that the rates are very high in Europe, why some women get breast cancer and others don’t. You know, the risk of getting breast cancer up to about 80, 85, is one in ten in general across Europe. The things we know about only account for… the things that people can do to change their breast cancer risk, such as lose a bit of weight, don’t drink so much alcohol, will reduce breast cancer risk a bit but only by about 20% because most of the difference is from childbearing patterns, that European women don’t want to have lots of children and breastfeed, which is absolutely right. So most of the reason why women have high rates is for things they can’t change or don’t want to change. And, as I say, the things that they can change don’t make that much… they make some difference but they’re not huge. When one tries to understand then why some women get breast cancer and others don’t, when the background rates are high there’s a little bit of genetic but even the genetic factors we know about don’t make so much difference. Essentially, and this is because this is a meeting for clinical people really, the important thing is when women come and say, “Why did I get breast cancer and not my friend?” to say, “It’s largely bad luck.” Everyone in Europe has high risk, all women in Europe are at high risk and the main difference between the women who get breast cancer and not is just luck and that’s probably the main message.

There should be more research on how to mimic those changes, the hormonal changes that go on with a pregnancy in early life, and if we could mimic that and have women have some sort of equivalent of a hormonal… you could think of it almost as a vaccine but I don’t mean infectious, but some sort of hormonal treatment over a year which was the equivalent to a pregnancy, that could substantially reduce the risk of breast cancer but no-one’s doing research on that at the moment. That’s what I would recommend, is actually practical research on the really big reasons why women get breast cancer and to do something about it.

So how far away could we be from a fake pregnancy pill or vaccine?

There’s no-one that I know of in the world who is really doing that seriously now. I would think if a group seriously tried to look at that, it’s 20-30 years away. But it’s very depressing that it’s not being done and in the meantime there are a million cases of breast cancer in the world, it’s over a million now, it’s going to be two million by 2030 because rates are going up in developing countries now, in particular, as women are having fewer children. So it’s just this huge epidemic that we’re just watching and that seems very unfortunate.

Why do you think there’s this lack of impetus?

It’s not my field, I can say this is what you should do, it requires a lot of laboratory work that isn’t in my field and it’s very long term, it could be 20-30 years away and, in general, people want to do easy things, all this gene work is much easier, all this technology is set up. So it’s not easy and it’s long-term and that’s not what gets funded.

The lack of potential for short term profit is the issue?

That’s the way of describing it, yes.

And pregnancy affects the risks of other cancers?

Yes, it does. The main cancers of the reproductive organs in women, it’s breast cancer, it’s cancer of the ovary, cancer of the uterus, the lining, all of those are reduced if you have lots of pregnancies. So it’s possible, it’s not clear whether it’s exactly the same mechanism, but it could be that it’s more than breast, that by mimicking a pregnancy you could prevent more than just breast cancer.

What’s the overall message for clinicians?

What I’m going to say is that we know that genes play some role, which you can think of as nature. We know that lifestyle factors, which you can think of as nurture, also affect breast cancer risk. We know that there are very large variations across the world which is largely due to nurture, which is lifestyle, which is having children and that’s why breast cancer rates are high in Europe, because women don’t have so many children, don’t breastfeed and that’s the main reason that breast cancer rates are high. Given that background, the differences between women who get breast cancer and don’t is very small because basically they’re all at high risk to start with because of the childbearing patterns. So because I’m talking to clinicians, people who see women with breast cancer, I’m just pointing out that when women ask “Why me and not her?” to say, “You know, mostly it’s because you’re unlucky, there’s not a particular reason. So you’re unlucky against this background of very high risk because of childbearing patterns.” 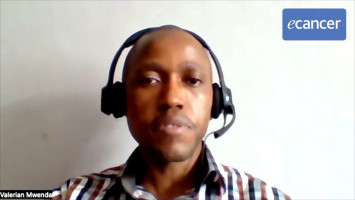