Biological differences in breast cancer cases due to age

The clinical director of the breast oncology centre at Dana-Farber, Dr Ann Partridge, explains the differences, biologically, medically, and emotionally, in young women with breast cancer as compared to older women with breast cancer. While there is no one concrete difference between the two cases, evidence suggests that the tumour biology is different in younger and older women.

Younger women are more commonly diagnosed with triple negative breast cancer and, in general, with more aggressive types of breast cancer. There is an increased prevalence of hereditary breast cancer in younger women, as it tends to develop earlier. Dr Partridge stresses that the effect and treatment, medically and emotionally, is very different in the age groups and each case should be considered with this information.

Biological differences in breast cancer cases due to age

I think that’s a really, really important question and my answer to that is I’m not sure. There is a lot of evidence that has been evolving over the last several years that suggests, as we begin to better control for tumour subtypes and account for the fact that younger women are more likely to get triple negative breast cancer, possibly HER2 positive breast cancer, and certainly when they get hormone sensitive disease they’re more likely to get luminal B rather than luminal A type disease, the luminal B being more aggressive in general. When we do control for the different types of breast cancer they get, it appears that age, in and of itself, is not necessarily associated with a different biology, it’s just that younger women are more likely to get these more aggressive subtypes of breast cancer, but they can get luminal As which are more, in general, indolent cancers compared to triple negatives and luminal Bs and HER2 positive breast cancers.

So the short answer to your question is we’re not sure, historically younger women have done worse but they also tend to present with more aggressive breast cancer in terms of the nodal status as well as the size of the tumours. A lot of that has to do with the fact that they’re not being screened. So it’s a tricky question. Another issue that comes up is the women who have a genetic predisposition to developing breast cancer, there’s an increased prevalence of that in a younger patient cohort because, by definition, people who have hereditary breast cancer are more likely to get it at a young age. So those women, in general, may also have more aggressive cancers and the biology may be different. So, yes, I think there probably are biologic differences within the cancers that young women get compared to old women, but we’re trying to tease out how they’re different in order to target them better.

Biologically the disease is probably different, or at least the disease they get, they get a different mix of disease. But clearly the effect of the disease and the treatment, both medically and emotionally is very different on a young woman. The very obvious thing is that young women are much more likely to be premenopausal and many of them may not have completed their families; they have issues related to difficulties with dating and body image, after going through breast cancer surgery in particular, and emotionally they have a harder time adjusting, probably in part to all of the things we just discussed, both at diagnosis and in follow-up. The other major issue is if they go through premature menopause, that has implications both emotionally for them and for biologic and reproductive reasons, but also for future health risks. They have a lot longer to live, assuming they survive their breast cancer, which most women will, with the ramifications of their breast cancer treatment. So, for example, a woman who goes through premature menopause at, say, 35, she has a lot longer to live with the oestrogen depletion over time than a woman who goes through it at, say, 50 and the average age of menopause is 51. That may have implications for her bones, because we know that can be associated with bone loss; her heart, because we know that premature menopause may increase the likelihood of cardiovascular problems down the line, as well as potentially cognitive functioning. There is some evidence in other settings that premature menopause is associated with increased risk of Alzheimer’s. Now we haven’t seen that in a breast cancer population in any kind of evidence-based way, but of course we worry about that and I think the critical thing now is to collect more data on that so that we can both understand the risks as well as potentially screen and intervene if a woman is at higher risk.

What can women that do not have easy access to treatment centres do?

We’re actually working on that problem and we’ve developed a programme for young women with breast cancer at Dana-Farber and then we were recently funded by Susan G Komen for the cure via ASCO, the American Society of Clinical Oncology, to develop an exportable version of information and support, both for physicians and providers and patients that focusses on the unique issues facing young women, to provide additional support and additional educational information and we’re testing that right now throughout the country, so stay tuned on that one. There is also already a lot of information available on the web through a lot of advocacy sites as well as education sites. I know ASCO has a nice website, cancer.net, Susan G Komen has a nice website, The Young Survival Coalition and the United States has a nice website, there’s a group called The Young and The Breastless who, I believe, are based in Canada and there are many, many other groups that focus on either unique groups of young women or all women with breast cancer but have subgroups and chat rooms that are focussed on young women. So there’s a lot of support out there on the web and the good news is younger women are more likely to be engaged with the web than some of the older women.

We are running a longitudinal cohort study of young women with breast cancer where we identify all young women at participating institutions who had a diagnosis. We actually identified them through pathology records because we wanted to get the most unbiased group of patients referred in. We survey them at baseline after diagnosis and then every six months for a few years and then yearly, and we’re looking at both disease and medical outcomes as well as psychosocial and long-term fertility rates, emotional issues, all kinds of things and we’re collecting blood and tumour specimens so that we can also do some translational work and some genetic analyses in this cohort. It’s really, I believe, going to be a treasure trove in terms of providing additional information to help inform young women and their providers about the risks they face as well as targets for intervention to improve upon those risks, both disease-wise and emotionally.

It’s Helping Ourselves Helping Others - the Young Women’s Breast Cancer Study, so the short is HOHO. 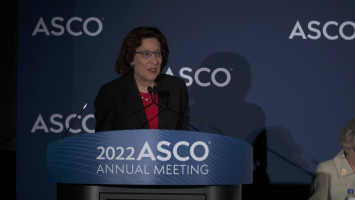 10 Jun 2021
A new way of thinking on the origin of breast cancer and how early breast cancer...
Prof László Tabár - University of Uppsala, Uppsala, Sweden