Use of circulating tumour cells as a prognostic or predictive marker

CellSearch was the first blood test developed to assess the number of circulating tumour cells (CTCs). This test can be used to determine the prognosis of patients with metastatic breast, colorectal, lung or prostate cancer. It is currently the only FDA approved mechanism of counting CTCs but there are a number of other technologies that now being developed, raising the possibility that clinicians may one day be able to use CTCs to predict when cancer will arise. Prof Caroline Dive talks to ecancer.tv about the development of these technologies, explains how patients would benefit if they could be used to assess to assess the efficacy of new drugs and discusses her work trying to identify relationships between the BRAF mutation and CTCs.

Use of circulating tumour cells as a prognostic or predictive marker

Yes, it’s a really exciting subject. It’s really a subject that has been there for a long time but the technology has only recently become good enough for us to have the ability to interrogate the circulating tumour cell population. So they’re called CTCs but, not surprisingly, that population of circulating cells is extremely heterogeneous. So finally with the technology moving forward in the way that it is, we can ask what kind of tumour cells are there in the circulation and, even though they are incredibly rare with an overwhelming background of white blood cells, it’s now no longer just looking for a needle in a haystack, we can look for the colour of the needle in the haystack.

So you take some blood off and then you put it into a machine. So how has that machine that you put it into changed to allow this sensitivity? Because this is new, this is not what I remember bringing into the Institute.

The first technology that really allowed the field to explode was by CellSearch; it’s called CellSearch by a company called Veridex. It’s been FDA approved, it’s semi-automated and you can count the number of tumour cells in colorectal, breast, prostate, we’ve done a lot of work in lung cancer, and you say in a certain volume of blood if you have more than this many circulating tumour cells that’s poor prognosis, if you have less it’s good.

And you’re in trouble.

Now that’s OK, it’s a great place to start but often you have already got a prognostic biomarker. What we’re able to do now, as the new technologies are rolling forward, CellSearch was the start if you like, there are now filtration based technologies, microfluidic chips and all sorts, nanocages and technologies that are coming forward. We can now say OK, can we find a predictive biomarker that we can measure serially before and after drug treatment, a pharmacodynamics biomarker? What more can we get from circulating tumour cells other than purely a prognostic indicator? Now that we can measure multiple colours, multiple proteins at the same time in the same cells, we can now begin to address is the drug target expressed at high or low level? Is the resistance biomarker expressed in the circulating tumour population? We’ve still got a long way to go but ultimately it would be nice to do next generation sequencing of the circulating tumour cell population.

It’s absolutely ideal, it’s not quite no touch monitoring.

But it’s pretty close and it does seem to be one way to evaluate drugs early on? Find failure, find cross-resistance and drug resistance?

Absolutely. Everyone is pushing for serial tumour biopsies. In the early clinical trials patient it’s a big ask. Yes, it would be ideal if we could take a piece of somebody’s metastatic deposit before drug treatment and then serially after new drug treatment but it’s a big ask for patients. And the hope is that something that we can measure in the circulating tumour population where we sample regularly before and after drug treatment will be non-invasive or less invasive for the patient and actually will give us useful information. We’ve got a long way to go, we’re not there yet.

Now you’ve got a lot of work on melanoma going on and lung and so on, and of course you’ve got two big stars there, you’ve got BRAF mutations in the melanoma here and you’ve ALK in lung. This is a great harvest, isn’t it? Two years’ worth of harvest.

I think so, we’re just beginning to look at BRAF mutation in circulating melanoma cells.

And although we’re just… this is work done by Paul Lorigan at the Christie Hospital with our joint clinical Fellow, Leila Khoja, and I’m presenting that tomorrow. We have a very small cohort of patients, we’ve just started. The prediction was, because BRAF mutation might be a poor prognostic factor, you’d see more patients who have got BRAF mutation in the tumour having more circulating tumour cells. So far it doesn’t look that way but it’s early days and we’ll have to continue the study and see what we find.

And can you do an ALK assay on circulating tumour cells?

We’re working it up, we haven’t done it yet. It’s very challenging still, the technology is getting better and better but it’s still a big ask. Actually that percentage of lung cancer patients who have that ALK…

It’s small so you have to go looking in a lot of patients to really work that assay up.

And then, of course, is the circulating tumour stem cell a holy grail or what?

You tell me what to measure to define it and I’ll measure it.

That is a little challenge, I have to say. Thank you very much indeed, I’m really, really happy that we squeezed you into the programme.

My pleasure. It’s a fantastic meeting, so much going on.

It is a super meeting, I quite agree, and I’m losing my voice interviewing all these exciting people. Thanks very much indeed, Caroline. 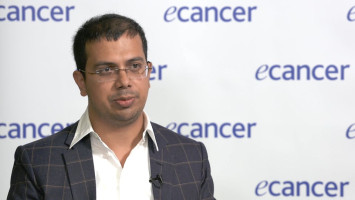