This video is restricted to members who are registered with ecancer as a healthcare professional
Please login or register for free to confirm your details.
Published: 21 Sep 2021
Views: 1810
Rating:
Save
Dr Danny Nguyen - City of Hope, Orange County, USA

He also mentions other emerging data from recent conferences regarding the treatment of EGFR exon 20 ins mutation NSCLC patients.

He also looks at the data on managing EGFR TKI toxicity from ESMO and WCLC 2021, including toxicity profiles of mobocertinib, DZD9008, and amivantamab.

He concludes by talking about what the future looks like for the treatment of EGFR exon 20 ins NSCLC.

I am Dr Danny Nguyen with City of Hope, Orange County. I practise out of our Irvine and Huntington Beach offices. At ESMO this year in the EGFR exon 20 space there were predominantly three drugs that were presented – amivantamab, which got approval in the United States this year, mobocertinib, which also just got approval last week, as well as DZD9008.

Could you comment on the efficacy profiles of mobocertinib, DZD9008 and amivantamab?

I guess I’ll start with mobocertinib. They presented that in the prior platinum cohort their overall response rate is 28% with a median PFS of 7.3 months. What’s impressive is their median duration of response of 17.5 months. In total their clinical benefit rate was 78%. There were also some other abstracts earlier in the year showing that patients who had prior EGFR TKIs, anywhere between 20-40% of those patients also responded to mobocertinib. Those prior EGFR TKIs included osimertinib, afatinib and poziotinib as well. Also of note was that baseline brain metastases represented 35% of these patients and overall response rates were seemingly lower in patients with baseline brain metastases – 17.5 months versus 33.8 months.

Amivantamab demonstrated an overall response rate of 40%. Interestingly enough, they also reported 4% CR rates as well. The median duration of response was 11.1 months with a clinical benefit of 74%. Of note also, in their cohort they had only 22% of their patients having brain metastases but they did demonstrate an overall response rate of about 39%. So it seems like patients on amivantamab with brain metastases benefit just a little bit more than mobocertinib but patients on mobocertinib had a longer median duration of response. So I think there’s room for both of these agents in the management of these patients. Likely, any EGFR exon 20 patient throughout their lifetime will be on both drugs.

Also presented were the results of DZD9008, also an oral EGFR exon 20 TKI. Their overall response rates were similar to the prior two of 41%. Stable disease in 48% with a disease control rate of 90%. Over 40% of these patients had baseline brain metastases and they also appeared to also benefit from this medication. Also of note is that two patients who had prior received amivantamab had also responded to DZD9008 so when it comes to sequencing perhaps this medication could be used after amivantamab.

There was another abstract that showed that patients who had prior received immunotherapy also seemed to have benefit; it didn’t seem to influence the benefit of patients getting mobocertinib.

Could you discuss emerging data regarding EGFR exon 20 insertions in NSCLC?

Actually, they did have a lot of real-world data presented at World Lung and ESMO. In general, the current treatment options… well actually, before this year the current treatment options for EGFR exon 20 patients were mostly chemotherapy plus or minus immunotherapy plus or minus bevacizumab. When patients were treated with immunotherapy in general for this type of mutation patients weren’t on therapy for as long and, in general, those patients needed to go onto second and third-line therapy sooner. Their overall survival was a lot shorter.

With the advent of these medications there was a significant improvement in all those parameters so I think those are the main takeaways from that abstract.

Can you talk us through the management of patients in this setting?

The abstracts that had the most data on managing the side effects were mostly surrounding mobocertinib. Again, to talk about the side effect profile of mobocertinib, it has been pretty well characterised, consistent with other EGFR exon 20 and actually consistent with other EGFR TKIs in general. There were side effects including diarrhoea, which involved more than 93% of patients, as well as rash which involved more than 45% of patients. In general these side effects were mostly grade 1 and grade 2 and very manageable as well.

So when it comes to managing the patients with these GI toxicities I think there are some things that the physician can do and then there are some things that the patients can do. With regard to the physicians, since we know that so many patients go and get diarrhoea from the medication, I like to send the patients home with a prescription of Imodium or some other antimotility agent. I instruct them that whenever there is any change in their bowel movements to start taking the medication immediately. Then when that happens I like to keep track of the patients a lot closer because oftentimes if their diarrhoea isn’t managed with just the single agent antimotility agent they may need additional other medications like Lomotil and in severe cases they may need or other rogue  measures. Also reassessing the patients constantly for the need for hydration because these patients can get severely dehydrated quickly from the diarrhoea.

From the patient side, there are some strategies that they can utilise. Sometimes the patients notice that if they take the medication at different times during the day, for some reason that might influence their diarrhoea. In addition, certain foods trigger diarrhoea for some of these patients so instructing them to identify which foods trigger their diarrhoea symptoms and avoiding them would seem to make sense. At the end of the day, if the physician does all their measures and the patients do what they can, sometimes you just need to hold the medication until the symptoms recover. Fortunately, the characterisation of the time to resolution for these patients, typically these patients resolve their diarrhoea within two days for the grade 1 and 2 and typically about 6.5 days for the grade 3 diarrhoea. So the data surrounding GI toxicities and other toxicities with mobocertinib was a little bit more robust for mobocertinib.

Just to also mention that there was also an abstract regarding the characterisation of skin toxicities at ESMO as well. Again, many of these patients had a manageable rash and a lot of them were just managed with topical steroids. Sometimes I’ll use also oral antibiotics like doxycycline or minocycline and topical antibiotics also help. For really severe rashes oral steroids are sometimes necessary.

Some other patient factors that I’ve found that help manage rash as well is instructing patients to use a lot of moisturising lotion. Sometimes also avoiding as much sun as possible seems to help too. Sometimes these patients develop photosensitivity as well.

Takeda also presented some data at the World Conference on Lung Cancer this month demonstrating that patient quality of life was maintained while they were on mobocertinib. Key things were that patient cancer symptoms which included dyspnea, coughing and chest pain had significantly improved. This was despite them noting worsening symptoms including diarrhoea and rash. So, to me, this represents that patients were willing to deal with a little bit of the adverse reactions in the diarrhoea and rash if they felt like their cancer symptoms were improving.

What does the future look like for the treatment of EGFR exon 20 insertion NSCLC?

The future looks very bright, actually, for EGFR exon 20 patients. I just mentioned that amivantamab was approved this year as well as mobocertinib getting approval last week. I don’t think we’re done with those medications just yet; I know that amivantamab as well as mobocertinib are looking at other ways to improve their efficacy such as combining with chemotherapy which seems like a promising option as well. So far that data hasn’t been presented just yet but we’re going to see it at some point. If we are to go and look at the EGFR exon 19 and 21 space perhaps combining amivantamab with another EGFR exon 20 specific TKI would make sense at some point.

Then we talked about DZD9008 showing promising efficacy and I liked the fact that they included so many patients with baseline brain metastases because that’s an important consideration for these patients. Many of these patients will progress in the CNS so identifying a medication that can get into the CNS as well as be tolerable is very beneficial for these patients.

So some other treatment options that have also come in and worked, coming down the line is a drug called CLN081. Very encouraging data presented at ASCO this year. They reported a 50% overall response rate with stable disease in 45% of these patients. Disease control rate of more than six months was at 68%. The trial also had some data on patients who received prior poziotinib and mobocertinib and some of them did appear to benefit from being on CLN081. Honestly, I think the side effect profile seemed to be very similar to mobocertinib and other exon 20 TKIs but it seemed to be a lot less and a lot less of the grade 3 toxicities as well. So this is going to be a very promising medication to keep your eye on for the future.

Some other medications include BDTX189. They also presented some preliminary data at ASCO and it seems to be a very well tolerated drug and seems to show some early signs of efficacy in the exon 20 space as well.

Two medications that I have my eye on also are ones from Bayer – 2476568 – as well as ORIC114. These medications seem to be promising in that they are showing some preclinical signs of CNS efficacy as well. The Bayer compound is unique to the other TKIs in that it’s a reversible inhibitor so hopefully that might help overcome some of the challenges for these patients that become resistant in the future.

I want to make sure that patients as well as clinicians are aware that there’s a large international support group headed by Marcia Horn called the Exon 20 Group. Their website is exon20group.org. They’re actually the lead advocacy organisation designated by Janssen and Takeda for this particular disease. They have many resources for these patients and a lot of patients will get connected with a patient that’s going through the same thing that they’re going through. They can also a lot of the time provide some extra resources for, for instance, managing some of the side effects of being on these special medications as well. 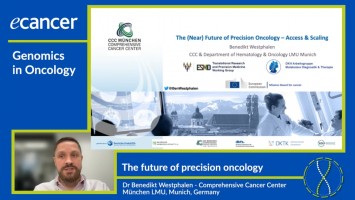