Dr Janine Stutterheim speaks to ecancer about a study she presented at the virtual ASH 2020 meeting on the clinical implications of minimal residual disease detection in infants with KMT2A-rearranged acute lymphoblastic leukaemia treated on the Interfant-06 protocol.

She initially talks about the aims and objectives of the study which was to detect MRD in paediatric ALL patients to investigate the prognosis and best treatment pathway for these patients.

She then explains the methodology used in this paper and highlighted the key results observed.

Dr Stutterheim on asking, also explained what MRD was and how it could be helpful.

She concludes by discussing how the results from this study could impact the future treatment of paediatric ALL patients.

The study was to see what kind of prognostic impacts minimal residual disease detection would have in infants with ALL and then KMT2A-rearranged ALL because we know that in older children it has a very strong prognostic value but in infants it wasn’t studied so much. So that was the main goal, to see if there was also prognostic value in these babies.

What was the methodology used in this study and how was the MRD calculated?

What we did, in the Interfant-06 protocol MRD was measured at several time-points only not all patients that were included. We had MRD available but of more than half of them an MRD was measured with qPCR and the main target for qPCR was the genomic fusion breakpoint sequence.

Furthermore, we also saw that if patients are still MRD positive at the end of consolidation this was also prognostic for survival and it was not impacted by the consolidation treatment given.

MRD is minimal residual disease, so it’s a very sensitive detection of residual disease. While using qPCR one can detect one in 10,000 to one in 100,000 cells. In this study the main target was the genomic fusion breakpoint sequence, so that’s a very patient specific target. Also, due to that, there is no background expression of this marker or no false positivity. So this means that with this technique you can really sensitively measure how much residual disease is there and what we see is that if residual disease is still detected after consolidation, for example, this is prognostic for survival as in older children.

How will these results impact the future of treating paediatric ALL? 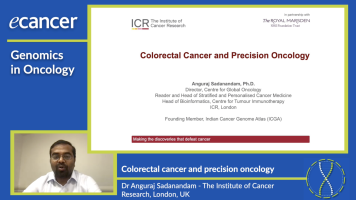