Oncoproteins and genes involved in the chromosomal translocations of APL

Published: 21 Apr 2011
Views: 6304
Rating:
Save
Prof Pier-Paolo Pandolfi - Harvard Medical School, Boston, USA
Prof Pier-Paolo Pandolfi received the 2011 AACR International Award for Cancer Research for his outstanding work in the field of cancer genetics and mouse models for cancer. The research has helped develop the understanding of the molecular mechanisms and genetics underlying the pathogenesis of leukaemias, lymphomas and solid tumours, as well as in modelling these cancers in mice.

Prof Pandolfi speaks about the work he has done characterising the function of oncoproteins and genes involved in the chromosomal translocations of APL (acute promyelocytic leukaemia), as well as of major tumour suppressors and novel proto-oncogenes. These accomplishments have led to the development of novel and effective therapeutic strategies, and, as a result, APL is now considered a curable disease. Prof Pandolfi is now using the same methods to try and develop treatments for lung cancer and talks to ecancer.tv about the progress he has made in this research.

Oncoproteins and genes involved in the chromosomal translocations of APL

ecancer.tv continues now with a fascinating topic because it gets us on to differentiation that’s at the heart of cancer, actually. You, Professor Paolo Pandolfi, have been awarded the Pezcoller International Award – congratulations, that’s happened right here. And I think it’s for your work on APL, acute promyelocytic leukaemia.

Yes, I would say that the award was given because of this phenomenal story which pertains to a leukaemia which only twenty years ago was considered a killer and now is considered curable, if not eradicated, on the basis of differentiation therapy, on the basis of targeted therapies that really are geared to destroy the oncogene, the bad driver of the leukaemia.

So you’ve been able to reverse the process, the cancer process, so to speak?

Yes, and actually now if you diagnose APL…

Your happiness at what twenty years ago was a death sentence but also you could be routed to a specific treatment with targeted therapies, then admitted, treated and sent home cured and off drugs, which is the ultimate definition of cure. In cancer we cannot mention many examples whereby the patient goes home disease free and drug free, APL is one of them. And actually by now we are trying to remove consolidation chemotherapy so this will be the first cancer to be treated solely and cured solely with targeted therapies.

Go home and forget about it.

Yes, which is not happening in other cancers where success, nevertheless, was called, such as chronic myelogenous leukaemia where the patients are still treated on a daily basis.

Give me the brief story of what you did in terms of APL, what was the key process?

So the study, I was lucky or privileged to follow it from the identification of the genetic make-up, meaning we found the fusion genes which are associated with APL while I was a last-year medical student, believe it or not. Then the saga of APL went through a phase of mouse modelling; we could re-introduce the faulty genes of human APL into the mouse, generating a faithful mouse model of APL and then we could use these little patients to optimise treatment. As a matter of fact the treatment and the combination of drugs that is given to human patients nowadays is based entirely on mouse preclinical efforts.

So you tried all-trans-retinoic acid and arsenic?

And retinoic acid in combination in mice and we could demonstrate, because APL by the way, this is a side issue but very important, is not one but many, although it’s already a sub-type of acute myelogenous leukaemia. We know of six different genotypes, we could recreate the genetic complexity of each and every genotype in the mouse and then optimise treatment according to the genetic make-up.

Now that’s APL, a big success story, you’ve just been awarded the prize. What about lung cancer, because you’re now looking in the same way at lung cancer and you’re also looking at models as well, aren’t you?

Yes. We have applied this logic and actually we tried to expedite this approach which was from mouse to man in a way by which we synchronise now at Harvard Medical School, at our cancer centre, each and every experimental human trial with a parallel preclinical trial in a mouse model of that type of cancer. So we are doing this for prostate, for lung, for breast, for endometrial, for ovarian cancer, leukaemia and so on. So imagine that a new experimental drug is tested in the prostate cancer clinic, we enrol each and every mouse model of prostate cancer in exactly the same way, performing exactly the same trial and then we stratify patients on the basis of the response or the resistance we find in these mouse models.

Now I want to ask you about the actual process of modelling, but first I can’t resist asking you how far you’ve got with lung cancer?

With lung cancer actually, although lung cancer is still a very, very serious form of cancer, the progress in modelling lung cancer and in testing drugs in lung cancer are extremely rewarding, meaning that we have been able to recreate the diversity underlying the genetics of lung cancer and what we find, by doing this integrated approach, is that the mouse predicts in full if certain patients would respond or not. For instance, I’m sure you know that there is ALK which is another important driver of lung cancer, and by now there are ALK inhibitors, which seem to work. We have been able to demonstrate that they do work in the mouse version of the ALK lung cancer and we now study how we can combine this drug with conventional chemotherapy or with further experimental therapeutics. So I would say that lung cancer is one of the most accomplished and advanced forms of cancer in this respect.

There is a paradox because, although mice and other animals are absolutely essential to the process of developing new drugs, it simply couldn’t be done without them, still clinicians are a little suspicious of something that works in a mouse, they’re not totally sure it will work in a man. How can you bridge that suspicion because you’ve now set it in a very careful way?

Yes, I think that the suspicion is due to a historical misconception, which is that the mouse models that people look at with great scepticism are mostly mouse models in which you would inject cell lines coming from human tumours, the so-called xenograft. In testing drugs in xenograft, often time we were misled; drugs that seemed to work didn’t work and so on. Here the approach is completely different, the mouse model we use, our mouse models which are engineered to express the human faulty gene, and that spontaneously develop lung cancer, prostate cancer, leukaemia, driven by the human gene. And we have much more control on that kind of cancer, which is an endogenous cancer, much more knowledge vis-à-vis a cell line which has been in the lab for many, many years and has drifted. You know, the cell lines, simply put, rarely represent the cancer of origin.

So they’re scientifically extremely interesting, fascinating work but could be unrelated to the clinical situation.

And the data which we got from xenograft was misleading and this is the reason why historically people think about mouse models as really non-predictive tools. But this is a different type of modelling, this is recreating the complexity of the genetics of human cancer in a mouse which is engineered in that way.

OK, what practical things would you now say to doctors? Are there any steps forward that you’ve already made that can be applied and what kind of new hopes for improving and refining individualised cancer therapy would you hold out as a result of using your animal models?

The goal is now to accelerate the process which, in my opinion, is working and will work. The question is how to tackle complexity. We have way too many drugs to be tested, which is good news for the patients on the one hand, but has to be done and has to be done rapidly. People don’t want to wait another forty years to gain two months on a specific subtype of cancer. Yet we are confronted with the fact that we have way too many drugs to test if you want to test them in the classical phase I, phase II, phase III. So we believe that the process is there, the question is how to speed it up, how to test this drug, how to test them combinatorially and we think that the mouse, along with the genomic revolution, gives a unique opportunity. So this integrated approach, whereby you seek the information in the human cancer and then you parallel this information with the mouse cancer and you see which drug works and where, is the way to go.

And is there anything you can do now, if you’re a clinician and you’ve got a patient, does this help you at the moment or is it all for the future?

It is experimental, but just to give you a concrete example of how this revolution is impacting, by now at our cancer centre we are sequencing the cancer genome of each and every patient in a systematic manner in order to stratify on the basis of this genomic information. There are major hurdles for global health systems because how do you pay for this effort? At the moment we are paying through philanthropic support but how do you get reimbursed for such an analysis? The hope is that the cost of genome sequencing drops but in practical terms we are already using the genomic information to guide therapy. This is the most, I would say, immediate implication.

And we’re on the threshold of a new, more information-rich era that will help the clinicians?

Absolutely. I’m absolutely convinced that this is the case and it’s not only going to be the case in the future, it’s already on now.

Paolo, thank you very much for joining us on ecancer.tv.

12 Aug 2022
The results of the global obstacles to lung cancer screening report
Professor Rudolf Huber - The Hospital of the University of Munich, Munich, Germ... 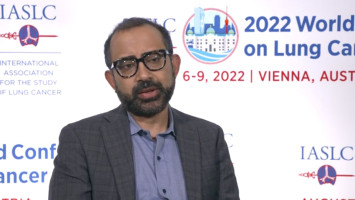