Dr Melissa Johnson speaks to ecancer in an online interview for the virtual ASCO 2020 meeting.

The CITYSCAPE trial is a randomised, double-blind, phase II study of the anti-TIGIT antibody tiragolumab atezolizumab vs placebo atezolizumab in patients with PD-L1-selected NSCLC.

I’m going to tell you about the CITYSCAPE trial which was a randomised phase II trial for patients with newly diagnosed non-small cell lung cancer. Tiragolumab is an anti-TIGIT antibody. TIGIT is an inhibitory checkpoint; it’s expressed on tumour infiltrating T-cells and natural killer cells and, like PD-L1, can be inhibited in such a way that restores anti-tumour immunity.

So in this small randomised phase II trial we see a suggestion that the two drugs together, tiragolumab and atezolizumab, may be more efficacious than atezolizumab alone. This is exciting and at ASCO where we also had other reports of other immune combinations, nivolumab ipilimumab, for example, nivolumab ipilimumab chemo in CheckMate-227 as well as 9LA. Notably, in the CITYSCAPE data the rates of discontinuation due to treatment related adverse events were similar between the two arms, around 10%, which was less than in the trials in which patients were treated with immune combination nivolumab ipilimumab.

So this was a small effort and it has led to a randomised phase III trial that’s now enrolling. We are eager to see if tiragolumab atezolizumab may be another chemotherapy free regimen for the treatment of newly diagnosed non-small cell lung cancer patients. 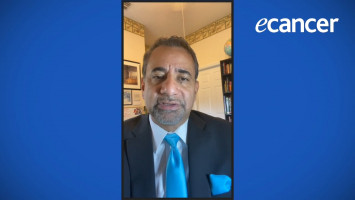