Dr Retsky explains the concept behind the title of the paper and the background of the study. He notes that due to the variety in author backgrounds - including surgery, oncology, anesthesiology and his own in experimental physics and computer modelling - they had an unusually broad perspective on cancer.

The results of the study indicate that perioperative use of NSAIDs can reduce the systemic inflammation experienced following surgery, curtailing the risk of early-relapse.

He notes that the same bimodal relapse pattern can be seen in other cancers, suggesting that using NSAIDs in this way may have universal potential across cancer types.

However, Dr Retsky explains that the low cost of the drug actually presents a hurdle for researchers, and he comments that future research on this treatment will have to be motivated by something other than financial gain.

Dr Retsky outlines his work on triple-negative breast cancer in Nigeria and his hopes of being able to extend this treatment option to LMIC areas, concluding by discussing what is required for the next steps of the study.

You can read the article published in ecancermedicalscience here.

4 May 2022
Social distancing and economic crisis in Latin America during the COVID-19 pande...
Prof Richard Sullivan and Prof Bettina Müller 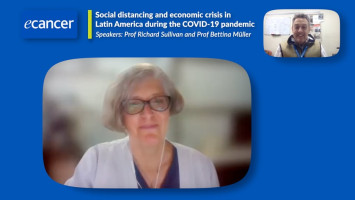 24 Dec 2020
What is global oncology and what is the presence of global oncology in Europe
Prof Cristina Stefan - Institute of Oncology 'Prof Dr Alexandru Trestioreanu', B...