The challenges of treating breast cancer in Brazil

Dr Felipe Ades speaks to ecancer at the 2019 San Antonio Breast Cancer Symposium about some of the challenges of being a. breast cancer oncologist in Brazil.

He explains that Brazil is an unequal country with 80% of the population without access to all treatments while the remaining 20% have access to any treatment due to health insurance.

Dr Ades states that Brazil does have a breast cancer screening program but that at the moment they tend to only be based in the developed areas and do not reach everyone.

The challenges of treating breast cancer in Brazil

Brazil is an emerging economy. It’s quite an unequal country so we have 80% of the population in the public health system where we don’t have all the drugs that are available for clinical practice and we have 20% of the population being insured by insurance companies that they are able to pay them. For these patients we have everything that they have anywhere on the planet. So being an unequal country brings a lot of challenges on how to make the new advances in breast cancer, new advances in science, available for everyone.

What can be done to address these challenges?

Can you outline your personal work in Brazil?

We in Brazil, oncologists, we work primarily in healthcare so we are seeing patients most of our time. Some of us we dedicate time for teaching so we have universities, we have residency programmes, and we have research. It’s not very open, very big, it’s not everyone that’s doing research but it’s something that is growing and we have cooperative groups now. We have the LACOG group, the GBECAM group especially in particular for breast cancer, and we have hospitals doing research, mostly participating in multinational trials pharma sponsored.

What is your highlight from this year’s SABCS?

Today we had a session on HER2 positive disease and we have very interesting results. In particular the trastuzumab deruxtecan which is an antibody conjugated drug that showed in a phase II trial a lot of effect, a lot of activity, in heavily pre-treated patients. So that could be an alternative for these patients that get to third, fourth line of treatment.
Also we have interesting data on tucatinib for patients with brain metastases, patients that are normally not included in clinical trials. It was quite positive; I see the study with a lot of hope for these patients. And I’m looking forward to see the updates in the checkpoint inhibitors, in immunotherapy, for triple negative breast cancer and also in CDK4/6 inhibitors.

In Brazil we’re talking about a country with 220 million people. We’re expecting 60,000 cases of breast cancer a year. So compared to other countries, developed countries, the percentage is not so big but it’s a huge amount of patients if we think we’re talking about 60,000 patients having breast cancer. Our molecular distribution is a bit different from other countries because we are very mixed people. We have more triple negative breast cancer than Western Europe and the United States and the population, the age of our population, is a bit lower. We have around 30% of the patients having breast cancer below 50 years old. So it’s a different population and maybe not completely adapted to the reality of the trials we see today.

What screening programmes are in place in Brazil?

We have a screening programme designed but our coverage is not so big. We estimate around 20-30% only of the patients doing period mammograms. We have the machines to do the exam but we don’t have the equal distribution. They are mostly concentrated in the developed areas of Brazil and they don’t reach the far ends of the country. So we have a problem to educate the people to say that they need to do the mammograms and also to distribute the machines more equally. 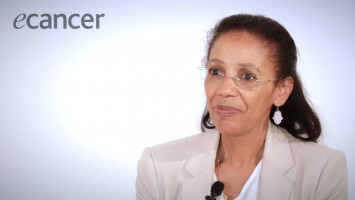