Prof Ghassan Abou-Alfa speaks to ecancer at ESMO 2019 in Barcelona about the phase III ClarIDHy trial evaluating the use of the targeted therapy ivosidenib for treating advanced cholagiocarcinoma.

He explains that unfortunately cholagiocarcinoma is an aggressive disease with very few therapies however the discovery of the targetable isocitrate dehydrogenase 1 (IDH1) mutation (seen in around 20% of patients) has opened the door to a new treatment.

Prof Abou-Alfa reports that patients treated with the targeted therapy ivosidenib significantly improves progression free survival when compared with patients given a placebo.

Cholangiocarcinoma is an aggressive disease. Sadly the therapies at the moment are limited to a first line chemotherapy-based treatment. We have a clearer understanding of the genetic changes that can occur with cholangiocarcinoma and one of those changes is the mutation of IDH1. IDH1, when it is mutated it can cause a reduction of α-ketoglutarate to 2-hydroxyglutarate that is oncometabolised that can cause oncogenetic changes. The mutation of IDH1 can occur in about 20% of the patients with cholangiocarcinoma and we don’t see that it does favour a good outcome. As such, and based on a phase I clinical trial that included a cohort of about 73 patients with cholangiocarcinoma, we saw an improvement in the progression free survival to 3.8 months and overall survival to 13.8 months. This was enough justification to carry on with the ClarIDHy study that evaluated ivosidenib versus placebo in phase III.

In the phase III clinical trial, the CLarIDHy, which was a global phase III randomised double blinded study for patients with advanced cholangiocarcinoma and mutated isocitrate dehydrogenase-1, or IDH1. Patients who were eligible had to have evidence histologically of the cholangiocarcinoma, they had to have a mutation of the IDH1 confirmed, good performance status, at least one, maximum two, prior lines of chemotherapy that should have included gemcitabine or 5-fluorouracil. Patients were randomised after confirming the mutation to a two to one randomisation to ivosidenib at 5mg daily that was done in a continuous fashion versus placebo. Very importantly, the patients on the placebo arm, and especially because they have the mutation, to be given the opportunity to be evaluated with the drug or get the opportunity to be exposed to the drug were allowed to cross over after radiological progression to start on the ivosidenib.

The progression free survival was appropriate justification for different reasons, among which, yes, we wanted to give the opportunity for everybody. At the same time I give a lot of credit for the advocacy groups that really supported the exposure and the opportunity for patients to be at least given a chance to be evaluated while getting on the ivosidenib.

The drug was rather well tolerated. The common side effects or adverse events that we have seen all across the grade were 3, pretty much nausea and diarrhoea and fatigue. When it comes to grade 3 or above adverse events the ones that were commonly seen were anaemia, increased bilirubin, increased AST and ascites. Interestingly, though, the numbers were acceptably low and, if anything, the drug was, and on personal experience was, rather well tolerated.

At the progression free survival that we discussed, the overall survival in view of the crossover were able to calculate it based on what we call a RPSFT method that will allow us to evaluate the overall survival for the placebo arm as if the patients never crossed over. We ended up with 10.8 months for the ivosidenib arm versus 6 months for the placebo arm with a hazard ratio of 0.47, p-value of less than 0.001. Between the results of the progression free survival as primary endpoint, as well as the overall survival, added to other positive points among which are the response rate, we showed quite a bit of stable disease. In view of the cytostatic nature of the drug and, of course, the tolerability based on the adverse events profile, I think this will be hopefully practice-changing and it will be an opportunity that will be available for patients with advanced cholangiocarcinoma and mutated IDH1. 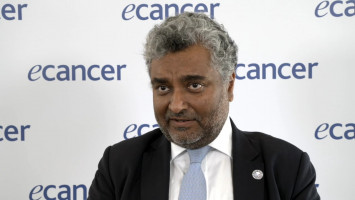 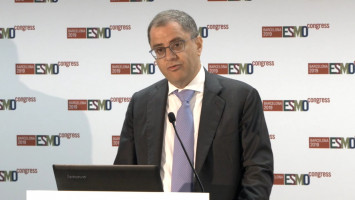 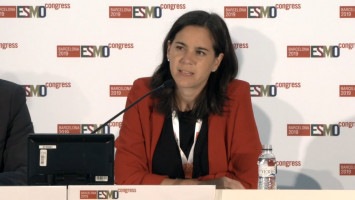