He explains that normally measurable residual disease in AML is measured by flow cytometry or PCR but, due to the sample, next generation sequencing was used.

Dr Hourigan reports that the patients that had no evidence of a variant detected showed equal survival regardless of which arm of transplant they were in.

I’m here today to discuss our results of a follow-on from the randomised phase III BMT CTN 0901 study. This was an important clinical trial in transplant for patients in remission in AML who were randomised to one of two condition regimens, either myeloablation or reduced intensity. My laboratory at the National Institute of Health in Bethesda, Maryland, focuses on measurable residual disease, and we had the hypothesis that the high relapse rates seen in those who had reduced intensity conditioning may be because of MRD in those patients, and so that’s what we tested and that’s what we’re presenting at this meeting today.

Conventionally, clinical MRD, measurable residual disease, in AML, is measured by flow cytometry or PCR. We couldn’t use either of those methods because of the sample source we had available. We had blood that was frozen but not in a viable manner that we could use for flow cytometry. So we had to adopt next generation sequencing and next generation sequencing is something that hasn’t been clinically validated for the use of MRD in AML but it’s something we specifically tested and benchmarked this study so we could get some sense of how much residual disease these patients had.

What endpoints did you assess?

We looked at a set of variants which are commonly seen in AML. We were looking for the detection of any one of those variants which had been previously seen in our patients. The study was a particular technical challenge in that we didn’t have any information about the information at diagnosis for these patients. We had a single sample prior to transplant of patients in remission, so we had to do a discovery of variants using next generation sequencing at a very low level, which is extremely challenging to do. Our endpoint was the detection of any variants which has been in our small panel of thirteen genes that has previously been associated with AML. We found that many of the patients did have one of these variants detectable at a threshold down to one in a thousand.

What were the main results?

Really interesting, there was a really striking clinical result, even in the early analysis which is why we brought this to EHA for the late breaking abstract and we’re delighted it was picked up for the Presidential Symposium. It was really striking, those patients who had no evidence of a variant detected, and this is over a third of patients, had equal survival regardless of which arm of transplant they were randomised to. Whether they got myeloablation or reduced intensity their survival was statistically equivalent. It was just in that group that had a variant detected that there was a clear difference in survival for those who got reduced intensity conditioning. Even before we look at the different kinds of variants, and we think these variants have different significance in terms of prognosis, just looking at the presence of any variant there was a clear detriment of those people who had a variant detected who got a reduced intensity transplant, both for increased relapse risk but also for decreased disease free survival and decreased overall survival. Before even any additional analysis is done the results are really statistically clear in this trial, so we thought it was important to bring here as a late breaking.

I think it’s for others to decide how much this changes the standard of care but as a leukaemia doctpr I’m very excited about this idea. It really helps us identify a high-risk group of patients. We knew that reduced-intensity conditioning wasn’t an appropriate therapy for some patients, and it does seem like those patients with MRD did do worse on these samples in this randomised trial when they got reduced-intensity conditioning. For me, if I was a clinical triallist, that would make me very excited and I would start thinking about randomised trials to help that group. Because I think for the other groups there may be an equivalence between the approaches but for that group who can’t get a myeloablative transplant for whatever reason but have MRD, that’s a really unmet need and I think that’s where future randomised trials in transplant should really go is looking at that group and how we can best help them.

How would you define MRD sensitivity?

All we measure is the sample of blood we get in the tube. We’re not measuring residual disease in the patient, I think that’s important to stress. We’re measuring any trace in the small amount of blood we receive in these patients. The sensitivity we look for in sequencing, typically for next-generation sequencing there will limit calling any variant above a 2% or a 5% level. We needed to go much, much deeper to look at measurable residual disease and that’s a challenge because there are a lot of false positive results in next generation sequencing. So we’ve set the threshold at one in a thousand, which we think is a meaningful threshold, but for some variants and specifically the variants with known prognostic implications, NPM1 mutated, Flt-3/ITD, we were able to go much deeper than that, and so we’re probably fivefold deeper than that in those variants because of the nature of those variants, those are insertion-deletions rather than signal point mutations. What the exact cut point for sensitivity needed for that test I think is going to continue to be refined over time, but technically this is the limit of what can be done with current sequencing technology. It’s not possible to push the sequencing any further than where we are now for these variants.

Could the results of this study support the use of next generation sequencing as an assessment for MRD?

We did a tremendous amount of sequencing for this study and at the moment I think it’s probably not feasible to directly translate this to the clinic. There are next generation tests available for tracking these mutations in AML, but their sensitivity is really ideal for the time of diagnosis where there’s a high burden of disease. To get reliable calling of variance, especially where there’s no knowledge a priori of what variants you’re looking for requires incredible sequencing depth, and we’ll show that today. So the consensus, the international recommendations which were published last year, actually don’t make any mention of next generation sequencing for exactly this reason. As investigators we’re using it but clinically there’s still some way to go to really work out the rules of how we can best use this technology. 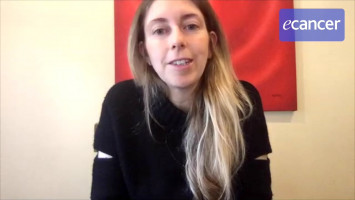