CALGB 90601: Comparing gemcitabine and cisplatin with bevacizumab to placebo for metastatic urothelial carcinoma

Dr Jonathan Rosenberg speaks to ecancer at the 2019 American Society of Clinical Oncology (ASCO) Annual Meeting about the CALGB 90601 trial, which compares gemcitabine and cisplatin (GC) with bevacizumab or placebo in patients with metastatic urothelial carcinoma.

He explains the methods used by the phase III randomised, double-blind, placebo control trial and reports that there was little to no change in overall survival, progression free survival or tolerability by adding bevacizumab to GC chemotherapy.

Dr Rosenberg concludes that while these results did not impact standard practice, they hope to continue learning from the trial by looking at translational studies around angiogenesis signatures, DNA damage repair mutations, and expression profiling to identify immune sub-types.

Today I presented the data from the randomised phase III trial of CALGB 90601 which was testing gemcitabine and cisplatin with bevacizumab or placebo in patients with metastatic urothelial cancer. Gemcitabine and cisplatin is still the standard of care for patients with metastatic urothelial cancer, there has been 10-20 years of trying to add additional agents, none of which have shown benefit. We know that angiogenesis is important in bladder cancer and that upregulation leads to poor outcomes and that if we add antiangiogenic agents in preclinical models we see improved anti-tumour activity. There were two phase II studies testing bevacizumab, both of which showed in combination with chemotherapy that median survival was increased compared to historical controls by about 4-5 months. This provided the rationale for the randomised phase III trial.

506 patients were accrued and randomised one to one to gemcitabine/cisplatin/bevacizumab for six cycles or gemcitabine/cisplatin/placebo for six cycles. If patients had ongoing responses or stable disease following the end of chemotherapy they were eligible to stay on bevacizumab maintenance or placebo. The study accrued over a five year period, it was accrued at a time when it was very difficult to enrol patients on bladder cancer trials, prior to, I would say, the modern era with checkpoint inhibitors.

The primary results show that there is not a difference in overall survival adding bevacizumab to chemotherapy in this patient population. The hazard ratio was not statistically significant and the median survival was 14.5 months with gemcitabine/cisplatin/bevacizumab versus 14.3 months with gemcitabine/cisplatin/placebo, so really no difference. There was, however, an improvement in progression free survival with a p-value of less than 0.05 and the hazard ratio was 0.79. The difference, though, in progression free survival between the two arms was only 1.1 months longer – 7.7 versus 6.6 for bevacizumab versus placebo. I really personally don’t think that that’s a significant enough increase to warrant this being adopted as a standard treatment and it was only a secondary endpoint of the trial regardless and the trial itself was negative.

The toxicity really wasn’t substantially increased except for what we’d expect to see with the addition of bevacizumab like hypertension and proteinuria. There were some cardiac events on the bevacizumab arm but otherwise in general the treatment was pretty well tolerated compared to standard chemotherapy. That had been a concern based on the prior phase II studies.

So at the end of the day gemcitabine and cisplatin still is the standard of care in this patient population. Progression free survival that’s increased is not dramatic enough to justify a change in practice. We hope to learn a lot more from this clinical trial because we have funding to look at translational studies around angiogenesis signatures, DNA damage repair mutations, expression profiling, immune subtypes, so that we’ll be able to have a richer understanding of metastatic bladder cancer and this will hopefully help us when we think about the results from the upcoming randomised phase III trials that are adding immunotherapy to chemotherapy or comparing immunotherapy to chemotherapy.

This trial took a very long time to accrue and it was accrued in an age when there was a lot of nihilism about new treatments for bladder cancer. Fortunately times have changed and we have many new agents in our armamentarium. So we now see clinical trials accruing 500 or 1,000 patients routinely in the space of a year or two, as opposed to five years. So it’s very gratifying to see that sea change in the treatment of bladder cancer.

Do you have any idea why you didn’t see a difference?

I suspect that the pathway is only important in a subset of patients is one possibility. The other possibility might be that the pathway is just not that important in general in bladder cancer, despite what we see in preclinical models. It is very important that we confirm the phase II data which looks so promising in a phase III trial and even if the trial is negative we needed to know that so that we wouldn’t be giving patients additional expensive and potentially slightly more toxic therapy. 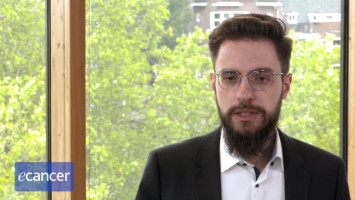