Updates from the BCON trial: Longterm outcomes of hypoxia modification in bladder preservation

She reports that hypoxia modification resulted in a sustained benefit with overall survival in 5 years continuing to improve.

She explains that this treatment is good and continues to benefit patients and when compared to cytotoxics it has a different side effect profile and is well tolerated.

The BCON study is quite an old study, it’s one of two landmark bladder preservation studies both of which were based in the UK. It recruited patients between 2000 and 2006 and it randomised patients to radiotherapy on its own for muscle invasive bladder cancer and radiotherapy with the addition of carbogen and nicotinamide. Carbogen and nicotinamide is used to modify hypoxia and the original results of this study were published in the JCO in 2010 and that was with a median follow-up of five years. At that time it showed that there was an improvement in three year overall survival of about 13%.

What we’ve done now is to go on to look at the long-term outcomes because patients are living longer. We wanted to know if the benefit sustained so we contacted all the participating centres and got them to get hold of the longer term survival and relapse outcomes for us. These showed that hypoxia modification resulted in sustained benefit, that we have a median follow-up of 10.3 years, so more than double the original and that showed that in five years the overall survival continues to improve.

What this information shows is that there continues to be a benefit. This treatment is good, it’s good for our patients and that’s important because hypoxia modification in combination with radiotherapy is actually recommended in the NICE guidelines as one of the options for bladder preservation treatment. Compared to cytotoxic treatment it has a different side effect profile and it’s well tolerated, so it’s something definitely to be considered in the clinical setting.

Are there any further steps for this research?

I suppose the short answer is yes. We know through research also done in Manchester that we have a gene signature that can predict benefit from hypoxia modification and this has been validated. So we’re in the process of planning a biomarker driven trial to look further at selecting patients for hypoxia modification.

How widespread is the use of this therapy?

Like I said, it is one of the options recommended in the NICE guidelines. It is unfortunately not offered in all centres in the UK. Compared to the use of cytotoxic medication to radiosensitise patients it’s not as commonly used, I’m afraid. 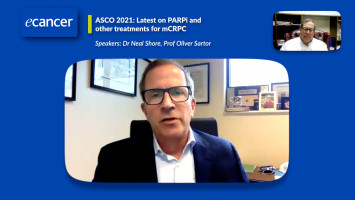