Prof Alphonse Taghian speaks to ecancer at BGICC 2019 in Cairo about the predictor factors of lymphadema.

He explains that for patients with a high BMI and with advanced disease, where surgery and radiotherapy is needed, the risk of lymphadema can be over 30%.

Prof Taghian states that, rather than waiting for it to develop, clinicians will screen for it by measuring the volume of the limb and looking out for any tiny swelling.

Basically when patients undergo lymph node dissection or sometimes sentinel node and then they receive radiation after that there could be some complications from the treatment. So the one which is the most serious will be lymphedema which is a swelling of the arm which if we don’t detect it or identify it early sometimes it keeps increasing and the patient will live all her life with a swollen arm. From our research we showed that it has a tremendous psychological, mental, emotional and physical implication for patients.

Surgeons are doing their best to reduce the extent of their surgery in the axilla. Unfortunately the radiation aspect is that a lot of studies now show that you need to give radiation to the regional lymph nodes when there is a positive lymph node. So both of them together, if the patient has advanced disease and has a high BMI, more than 30, the risk of lymphedema can reach up to 30-35%.

The way that we approach there is that we screen for it; we don’t wait until we see it. So we have a tool which can generate the volume of the arm and then every time the patient comes in follow-up we re-measure her arm. If we find a little bit of swelling, like 5-10% more than the opposite arm, we like to intervene, we raise the red flag and we start to address this issue with the patient, either with exercise or if it is large enough we give her a sleeve. So we try to address the issue of lymphedema as early as possible because there is a good possibility at that time that we prevent it from progressing.

How do you think prevention could be improved?

After the introduction of the sentinel node to replace lymph node dissection in many clinical situations the risk of lymphedema went down and there was a perception that it disappeared. But actually it did not disappear, it’s still there. The problem I’m having is that physicians are not thinking about lymphedema, they are just focussing on the cancer and focussing on the treatment. When they do that just the patient moves on with her life and if the patient comes back in a follow-up and they see lymphedema they will just say, ‘Go to physical therapy, they will deal with it.’ But what I’m trying to do is to change all this philosophy into making oncologists very much involved in talking with the patient about lymphedema, about the possibility. If the patient started to feel a little bit of heaviness in her arm, the ring is a little bit tight, that she has to check right away. This is not just something normal, she has to check and we have to figure out whether she is starting with lymphedema or not. So increasing the awareness to physicians and oncologists who see the patient up front is very crucial. Once we reach that level I think the risk of lymphedema will continue to go down. 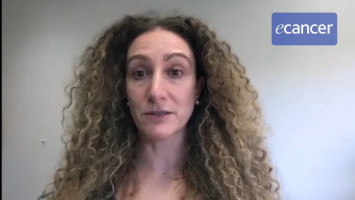