Advances in the treatment of renal cancer

Prof Tim Eisen speaks about a session at NCRI 2010 which looks at the advances we have made in our understanding of renal cancer over the last ten to fifteen years. The guest speakers at this talk will be Eamonn Maher (University of Birmingham), Inderbir Gill (University of Southern California) and Cora Sternberg (San Camillo Forlanini Hospital in Rome). Prof Eisen talks about the advances that have been made treating this cancer with anti-angiogenic drugs, gives example of the most effective treatments, but also notes that a small proportion of patients are better off treated with immunotherapy and explains how much more work needs to be done before a cure for renal cancer is found.

Advances in the treatment of renal cancer

The session tomorrow will involve most of the major advances in kidney cancer over the last ten to fifteen years and these include scientific advances in our understanding of the molecular biology of the disease; they’ll include advances in our surgical abilities and our advances in our treatment of disseminated disease using systemic therapies. We’ve got three excellent speakers for each of those sessions.

What topics will these talks be covering?

Eamon Maher is the first speaker and he will be talking about some of the advances in our molecular understanding of the genetics and the results of the genetic abnormalities which are responsible for kidney cancer. This is an area which has expanded enormously over the last ten to fifteen years and I think there is further news coming out in the near future which will raise eyebrows and alter the way we think about kidney cancer in general.

What recent developments have been made in the treatment of renal cancer?

The positive things about renal cancer are that this is a tumour type which is very, very dependent on the new blood vessels that abnormalities in the molecular clockwork of the disease cause. So, for example, our new treatments are aimed not so much at the tumour type itself but at the blood sac vessels supplying the tumour, and this has been a step change in our ability to treat the disease. So whereas before we had treatments which were effective for about 10% of patients, now we have treatments which are effective for about 80% of patients. It’s not cure, and indeed in some ways the old treatments are more impressive, for example, whilst very few patients benefited some patients, very few patients but some patients, benefited enormously, i.e. their disease resolved and didn’t come back. Now, what we would like to be able to do is to predict who will benefit most from immunotherapy, the old way of treating it to activate the immune system to destroy the tumour, who will not benefit from that and who will benefit from our new ways of treating the tumour, particularly directed against the vasculature supplying the tumour.

What are the most effective of the new renal cancer treatments?

The first drug that we investigated was a drug called sorafenib and that was compared following failure of immunotherapy. We also have a drug which has really become the standard of therapy around the world now, which is called sunitinib, and that was compared with interferon. Both drugs were found to double progression free survival in their respective settings; they are similar drugs in that they have overlapping toxicities and they benefit a similar proportion of patients but to a varying extent. So most people would say sunitinib is the more effective but also the more toxic option.

What are the key points that clinicians should take from this session?

I think clinicians tomorrow will get a flavour of the tremendous advances in science, in surgery and in medicine with respect to kidney cancer. They’ll get a flavour for the advances that we are making and also the tremendously large amount of further ground that we need to make up. So, for example, we are really curing very few patients indeed. People will hear about the advances that we’ve made but also, quite honestly, they’ll hear about the failures that we’ve experienced. So, whilst we can shrink disease, we can really only keep it under control for a year to two years and then we lose control. There are some really tantalising things about the treatment of advanced kidney cancer, so for example in most oncological fields, if you use a treatment option and it then works for a bit and fails you wouldn’t use that same treatment option again. With anti-vascular drugs that does not appear to be the right way of using these drugs, so there is quite clear evidence now that using a treatment to failure, resting the patient or changing modality and then going back to that modality later on, can be an effective strategy. So this is new in oncology, we don’t often see that. And this is an entirely new way of thinking and we haven’t yet got the studies or the techniques that would enable us to investigate that fully. 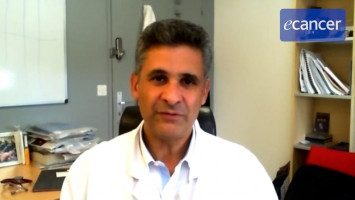 19 Sep 2021
Cabozantinib in combination with atezolizumab in patients with mCRPC
Prof Neeraj Agarwal - University of Utah School of Medicine, Salt Lake CIty, US... 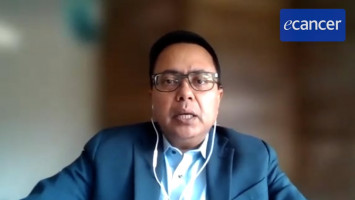