DrJosep Piulats speaks with ecancer at ESMO 2018 in Munich about results from the TRITON2 study looking at the use of the PARP Inhibitor rucaparib in patients with metastatic castration-resistant prostate cancer.

Dr Piulats states that there are now over 300 patients throughout the 3 arms of the study with 25% of recruitment being the first group of patients involved in the results presented at ESMO.

Here at ESMO we presented the results of the first group of patients treated within our follow up with rucaparib. What we have seen is a really striking high response rate with almost 50% response rate and a little higher than 50% response rate by PSA in a heavily pre-treated population of patients with prostate cancer that are positive for mutations in their DNA repair genes.

Can we dig into the patient numbers there – how many patients have been involved, what kind of subgroup analysis are we working with?

The TRITON2 is a complex study, it’s not a simple study, so there are three arms in the study; the two first arms are for BRCA1, BRCA2 and ATM. The difference between arm A and arm B is that one of the arms has measurable disease, the other arm doesn’t include patients with measurable disease. There’s an exploratory cohort, there’s the arm C, that includes patients that during the screening we found mutations in other DNA repair genes that we still don’t know enough information if these mutations are predicting response or not. So we are collecting this to try to find exactly if there are other mutations that could be getting benefit from rucaparib.

How many patients per arm?

The numbers have been increased, now in the total within the three arms we’re going to be over 300 patients included on the clinical trial. The patients that have been shown here are the first group of patients so it’s like 25% of recruitment. But because of the important results we thought that the results should be already exposed to the community.

With the promise of these results in the first 25% are there plans to then expand beyond these 300 patients so far and increase patient recruitment overall or funnel them towards one arm or the other?

Basically we are maintaining exactly the same structure. We are going to keep the arm A, arm B, so we want to have patients with measurable and unmeasurable disease because an unmeasurable disease in prostate cancer is a big challenge so there are a lot of patients who do not have measurable disease because bone marrow, high bone and bone marrow involvement. The cohort C has been increased as well; in the beginning it was only going to be twenty-something patients included and now it has expanded to 60, I think it was. This is basically because we’re finding a lot of diversity in this patient population, we’re finding a lot of mutations and, of course, you need to have more than one patient with each mutation so that’s why.

What does the timeline look like for final analysis, further results?

The TRITON2 has been already recruiting for a little over a year and I’m not talking about the patients that have presented here, I’m talking about the whole patient population that has been randomised and included in the clinical trial. We are close to 100 right now so we expect that in a little more than a year or more we will have already all the patient population included.

I would like to mention that one of the observations with this first analysis is that we are seeing different kinds of patient populations. For example, the BRCA2 patients that are the major mutation that we are finding, we’re seeing that they have specific characteristics. We’re talking about patients who have usually from the beginning a higher Gleason score, it seems to be a shorter time with previous treatments that means that maybe the patients were not responding well or responding not long to the other treatments. So we are talking about a special population of patients with maybe a worse prognosis and these are the patients that it’s really important to try to find new therapeutic options. In my experience, for example, I have several patients treated with rucaparib and we have some amazing responses in patients that were almost not included in the clinical trial because they are with a higher performance status. But we managed to get them fit enough to get into the clinical trial and one year later they’re doing a normal life. 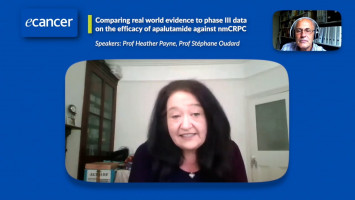