The study is an effort to collect blood specimens in all patients and tissue specimens in cancer patients to help develop a multi-cancer blood cancer screening detection test.

Dr Liu explains that they discovered in the test set, presented at ESMO, that they are able to classify cancer versus non-cancer with excellent sensitivity in the patients that cancer should be identifiable early.

The Circulating Cell-Free Genome Atlas Study is a multi-institutional collaboration sponsored by GRAIL. It is an effort to collect blood specimens in all patients and tissue specimens in cancer patients to help us develop a multi-cancer blood cancer screening detection test.

How many patient samples are being used to develop the platform?

We’re recruiting up to 15,000 participants. Recruitment started in August 2016 and we’re almost completed now. It’s been an amazing effort.

You mentioned that it’s multi-institutional, is that just working from within the US or globally as well?

It’s an international study, we have a couple of sites outside the United States and we in total have 142 participating institutions.

What are some of the endpoints? What’s the goal of the entire platform, the whole organisation, going through it?

The CCGA study was designed for the efficient development and validation of a blood based detection method for cancer. Of these 15,000 patients we have a pre-specified analysis plan for a subset analysis with 2,800 participants and that’s what we presented here today. There was a training set that we presented at ASCO and we presented the test set here at ESMO.

Can you tell us more about the test set from this presentation?

What we’ve done is in the training set we’ve developed classifiers of cancer versus non-cancer because of these 15,000 participants we’re recruiting in a 7:3 ratio of cancer to non-cancer patients. What we’ve determined in the test set is looking at all of these additional cancer patients that we have set aside. In fact, we are able to classify cancer versus non-cancer, not in everybody but with excellent sensitivity we identify it in those patients that we feel we should identify cancer in early.

The issue of crossover from non-cancer to cancer, depending on screening, must be a concern?

Yes, that’s why we need such high specificity. If you find signal you want to be sure that that signal is in fact associated with cancer. Importantly, as part of CCGA we’re not just sequencing material that is specific to tumour but we’re also sequencing white blood cells or normal DNA from people. What we’ve identified is this entity called clonal haematopoiesis of indeterminate potential, in other words those are mutations that are identified in our normal DNA in white blood cells, they accumulate with age and they are unique to us as individuals so they could be, in fact, mistaken as tumour. But we’re able to identify those as white blood cell derivatives, subtract that from the signal and find a pure signal that appears to be related to tumour itself.

Then is there any room for longitudinal follow-up for patients if they might progress from non-cancer to cancer and vice versa?

Most importantly we’re following all these participants for at least five years for cancer development and for their general health status. For those individuals without cancer there were a few individuals where we found a signal that we can’t attribute to white blood cells and so we are following them longitudinally. In fact, three of those are already diagnosed with cancer distant from the blood draw, suggesting that we can in fact diagnose cancers earlier.

I hope there’s also the incorporation of genetic counselling available for these patients then.

Because it’s a research study and we’re developing the test we are not returning results to patients because we don’t know what to do with it. Unfortunately or fortunately there is no genetic counselling involved at this point because return of results is not included in the study.

You mentioned this was 2,800 so far in the test set, when are we hoping to reach further landmarks, further milestones in the trial?

This was with 2,800 patients in total with this initial what we are calling the CCGA-1 study. We have the additional over 12,000 patients where we’re collecting information and doing the sequencing, again both on tissue as well as residual blood samples. So one of the next milestones is going to be helping to lock down this assay. Right now we are doing sequencing with whole genome bisulphite sequencing, whole genome sequencing and targeted sequencing, which you can imagine is quite costly and inefficient. If we can find two of the three tests or one of the tests, that’s ultimately up to GRAIL to decide, but to get the same sensitivity and specificity that’s ultimately the goal.

In parallel with CCGA we’re recruiting to several other large studies for validation cohorts. We at the Mayo Clinic have been privileged to participate in what we call the STRIVE study, so that’s collecting blood specimens in women who are undergoing screening mammography. We’ve recruited, as of this past Friday in fact, 95.000 participants in the United States; the Mayo Clinic was one of a few sites that participated in this. This will be the women’s validation cohort for the assay that is developed through CCGA.

We are very aware that developing a screening test for cancer has its caveats – the potential to find false signal and create worry. That’s why we’re being so stringent about the number of patients that we’re recruiting in the development of this assay. We will have to think in the future that if we do actually have an assay how are we going to incorporate it in clinical practice because it’s a very different way of thinking. We right now have screening paradigms for, say, breast cancer, colon cancer and lung cancer, they’re not necessarily widely adopted, but we’d love to have a screening tool to screen cancers that are more lethal, in other words have a high five year mortality rate and to be able to reduce mortality from those cancers. 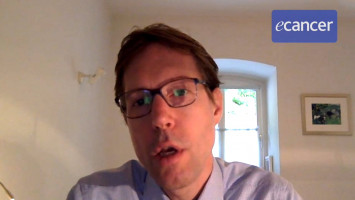