For more on these results, watch her interview with ecancer here.

It’s my pleasure on behalf of the SOLO1 investigative team to present some of the data that we’ll be presenting tomorrow in the presidential session from the SOLO1 trial which is an international randomised phase III trial evaluating the incorporation of olaparib maintenance following platinum based chemotherapy for women with advanced ovarian cancer who harbour a BRCA mutation.

These are the disclosures for the investigators listed on the manuscript.

Dr Banerjee outlined this, while ovarian cancer is a highly treatable disease, owing in a large part to its exquisite chemosensitivity, especially in chemotherapy naïve patients, the percentage of patients who survive disease free for long periods of time is dismally low and hovers in the 10-15% range. If we are going to make meaningful improvements on that rate it has to be with improvements in front line chemotherapy or front line treatment. As it stands now, and as Dr Banerjee pointed out, the vast majority of patients recur within three years of diagnosis and even though their cancer may remain highly treatable they are no longer considered curable. SOLO1 is the first international phase III trial to evaluate incorporation of maintenance olaparib or any maintenance PARP inhibitor in the front line setting.

The study schema is demonstrated here. Women with advanced high grade serous or high grade endometrioid cancer who harboured a BRCA mutation, had an excellent performance status and had at least an attempt at a cytoreductive surgery were randomised in a two to one fashion to olaparib tablets given twice daily or placebo. A key stratification factor was whether they entered the study with a complete or partial response at the conclusion of their chemotherapy and that’s defined as a complete response would be a patient whose CT scan or MRI at the end of chemotherapy shows no evidence of disease and their serum blood marker CA125 is within normal limits. A partial response patient would be a patient who ended chemotherapy with at least a 30% reduction in their measurable disease or perhaps they still had some evidence of disease on their imaging or even someone who had normal imaging but still had a slight elevation in their CA125, those would be classified as a partial response and those were stratification factors.

The study treatment, the assigned treatment, was continued until the time of disease progression or, if there was no disease progression, it was stopped at two years. For patients who entered the study with some evidence of disease, as I discussed with partial responses, and that disease was still stable at the two year mark there was the opportunity for them to stay on their assigned treatment beyond two years with conversation with the medical team.

The primary endpoint for SOLO1 is investigator assessed progression free survival and that is defined as the time interval from randomisation until such time as that patient progresses by virtue of measurable disease on their CT scan. Key secondary endpoints are progression free survival as measured by the blinded independent central radiographic review, or BICR; progression free survival 2, which is measured from the time of randomisation to SOLO1 until such time as the patients who have recurred and get another therapy progress again, that’s PFS2; time to first subsequent therapy; time to second subsequent therapy and then our key quality of life endpoint was health related quality of life as measured by the TOI.

The results of the primary endpoint of SOLO1, just to comment that between the two randomisation groups baseline characteristics were very well-balanced, as controlled by randomisation, and our median duration of follow up is 41 months in both groups. Here are the survival curves. For the placebo group we have a median progression free survival of 13.6 months which is actually exactly what we predicted it would be back in 2011 when this was designed. Among the women who were randomised to the olaparib arm their median progression free survival has not even been reached yet but the differences between the curve give us a hazard ratio of 0.3 with a highly statistically significant confidence interval which tells us, based on sensitivity analyses, that the improvement in progression free survival for women who were randomised to olaparib is about three years beyond that of women who were randomised to the placebo arm.

The safety profile for SOLO1 was very much in line with every other study evaluating olaparib in every other line of therapy. We saw very manageable low grade adverse events and, as demonstrated by the fact that only 11.5% of patients discontinued olaparib therapy due to adverse events and over 70% of patients who started olaparib on SOLO1 maintained at their starting dose throughout their participation in the trial, gives us a lot of reassurance that this is a highly tolerable and safe regimen.

So, in conclusion, we feel that the SOLO1 trial has demonstrated really an unprecedented improvement in the progression free survival in patients with a BRCA mutation who have advanced ovarian cancer when olaparib is incorporated following platinum-based chemotherapy. A key point here is that there was no change in the Kaplan-Meier curve at that two year mark when we stopped the olaparib or placebo therapy and so it appears that the benefit of olaparib maintenance is extended beyond even the two year time point during which patients were receiving treatment.

We do find a statistically significant improvement in progression free survival 2 which indicates to us that there is no detriment to using olaparib following front line chemotherapy for patients who do recur and need a subsequent therapy. There were no new safety signals raised that bring use of front line olaparib any level of concern.

So, in summary statement, we believe that the SOLO1 data really prompts a change in the standard of care for women with advanced ovarian cancer who harbour a BRCA mutation. We hope that this will be available to patients relatively soon. And that’s the data.

The use of PARP inhibitors in oncology from a palliative care perspective
Judy Knudson, PA-C - University of Colorado, Denver, USA 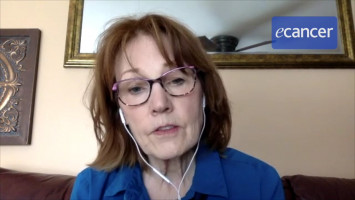