Dr Gilbert talks to ecancer at the Cancer Research UK Brain Tumour Conference 2018 in London about the use of molecular classification in brain tumours and whether classical pathology supersedes it.

He goes on to highlight the pros and cons of both approaches but states that ultimately they're complimentary to each other.

I was part of a parliamentary style debate about the use of molecular classification of brain tumours and whether it should supersede classical pathology. The reality is that the future would be best served using both, they are complementary. Classic pathology, histology, does give you a sense of the concentration of cancer cells, their appearance; it really does guide you but then you get confirmation and you get more depth of knowledge from then doing molecular or genetic classification of the cancer. So it really was a fun opportunity; my colleague Michael Taylor took the contrarian view even though he is a staunch believer in molecular classification and he actually did a wonderful job highlighting arguments that have been made to keep the classical technique which is over a hundred years old. But it did allow the audience to see the utility in both and it was quite a stimulating event, the metric, of course, being that nobody in the audience fell asleep during the hour-long debate.


Very interestingly, everybody had electronic voting apparatus before we started. The question was asked, ‘Do you believe that molecular diagnostics should be used in place of pathology?’ and it was 50-50 exactly when we started. Then a revote after the debate and the molecular classification actually came out at 54% to 46% so I actually won.


What are the barriers to molecular classification being used more widely?


The practical reality is at this point it is still expensive, it is not universally available. It is dependant partly on how the tumour tissue is obtained and processed. For adequate molecular diagnostics, for really good molecular diagnostics, the neurosurgeon should be taking the tumour out using scalpel, not using the suction device which macerates the tissue. It needs to be processed quickly; we will find that if they now accept as a standard procedure to freeze a portion of the tissue that genomic material is much better than that which is fixed. That has not been the standard, there hasn’t been a need for that standard in the past; I believe that need is becoming imminent. The other issue is the time it takes for the more complicated genomic testing looking at the whole exome or the whole genome, which is even more complicated. It can be weeks whereas if you look at a molecular panel often you can get the results within two weeks which is reasonable from a clinical perspective, particularly since the postoperative healing time is at least two weeks. We do not begin any additional therapy for a minimum of three weeks so there is that window to get the appropriate molecular testing and use that in the conversation with patients about next treatment. 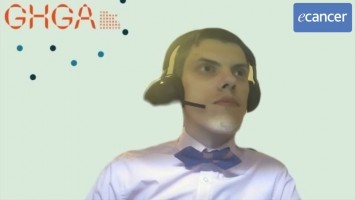