Published: 21 Oct 2010
Views: 7833
Rating:
Save
Dr Graeme Poston - University Hospital Aintree, Liverpool, UK
Dr Graeme Poston speaks to ecancer.tv about the challenges faced when trying to maintain a constantly high standard of surgery across the UK. Although progress has been made ensuring that surgeons are properly trained and working in well equipped specialised units there are still too much variation in the level of treatment offered in hospitals across the UK. Dr Poston discusses progress that has been made in the treatment of colorectal and liver cancer patients in the UK, where an increase in the degree of treatment centralisation, the development of new drugs and targeted therapies has significantly improved treatment success rates.

Graeme, thank you very much for giving us a couple of minutes. A very busy ESSO meeting and I know you’ve got lots of things to do but you’ve also got a lot of presentations to make and you’re talking about a number of things. You’re also involved in ESSO, the organisation. The challenges for ESSO?

The challenges for ESSO are raising the standard of cancer surgery across Europe. We’ve had a real problem, we’ve highlighted that in our research in the United Kingdom showing postcode operating. For instance, in colorectal cancer our group have published papers showing that you’re four times more likely to end up with a permanent colostomy in rectal cancer in one hospital than another in England. Your chance of being referred to a liver specialist for liver resection of metastatic colorectal cancer, there is a 1000% difference between the worst performing hospital in England and the best performing hospital in England, which is really quite frightening. So there’s a real challenge to us to get this message out there, raise the standard of care, show people what 21st century cancer surgery should be about. There’s a large level of ignorance out there and there’s a big challenge in training. We’ve got real problems at the moment across Europe because we’ve had the working time directive come in. Gordon, when you and I were youngsters you were on call every night or every other night.

We trained on something like 30,000 - 40,000 hours of open ended training and now we’re meant to train surgeons in six years of 48 hours a week. So they’re getting 20% of the exposure to clinical surgery that I had in my training programme and how we actually manage to deal with this problem. Cancer surgery now is becoming more highly specialised, we’re becoming very site specific. The idea of the old general surgeon who would do a thyroid and a bit of breast surgery and bit of bowel surgery and a bit of stomach, some haemorrhoids and a few varicose veins, that’s all gone now. We want our surgeons to be site specific, we want them to be doing livers all the time or rectum all the time. In Britain we have gone some way to solve that, we’ve centralised. I’m also the President of the Association of Upper GI Surgeons in Great Britain and Ireland and we’ve said, quite specifically to the government, Department of Health, that for surgeons doing esophagogastric cancer surgery and liver and pancreas, that they must be working in centres serving two to three million people; they must work in teams of four, five, six surgeons working together; they must all be working to the same level and they must publish their outcomes. That’s the crucial thing. In the past surgeons have just swept their outcomes under the carpet, they had no idea what they were doing. They had a vague idea about operative mortality rates, very vague, it wasn’t stratified to case mix. And that’s another big factor we’ve demonstrated, that poverty is a major factor and just access to cancer care, let alone the quality of cancer care. So these are the big challenges that are facing us.

I had thought that the UK would have come along a bit quicker after the Bristol paediatric cardiosurgery issue which has had ripple effects right across Europe but it doesn’t seem that we’ve accelerated progress much. I personally believe that it’s up to ginger groups like yours to really keep this going. The heterogeneity, of course, is not just within the North of England or Scotland, it’s right across Europe and I heard Commissioner Dalli speak about this as one of his major challenges as Commissioner for Health in the European Parliament. So I’m hopeful that we might have political backing there. Now colorectal cancer, rectal cancer, a very, very specialist area but lots of things happening there, there’s a lot of new imaging technology around. Not only are you getting a bit more specific and more targeted but so are the radiation therapists and ESTRO were talking about that earlier this week. What’s exciting for you?

It’s exciting in many areas. Firstly, as a surgeon, the fact that we’re specialising now, we’ve centralised the liver resection programme certainly in the United Kingdom, although it’s not the same across the rest of Europe. Every hospital in Holland thinks that they can do liver resections, which worries me somewhat when there are something like fifty hospitals in Holland for ten million people and everybody thinks they can do that. Rectal cancer surgery, which is technically very challenging to do well and needs to be centralised as well, just to maintain the quality otherwise the work of Bill Heald is wasted. This is what Bill Heald has been preaching now for thirty years of total mesorectal excision to reduce local recurrence rates, that needs to be centralised and that will be the next thing in Britain.

How much the rest of Europe will follow us, bearing in mind the politics of delivery of care across Europe is very difficult. The other major advance, as you know quite clearly, has been in the medical oncology of advanced colorectal cancer. We’re now in the situation, we’ve clearly demonstrated that if you have resectable stage 4 disease, your prognosis is as good as stage 3 at five years.

And the days of asking for a clinical trial to prove it are gone; it’s like asking for a clinical trial of appendectomy versus antibiotics for appendicitis. Where we are really making big progress is the integration of multi-disciplinary management, you look at the revolution in medical oncology in just the last twenty years. In 1990 all we had was 5FU and the big debate was do we give it with low dose leucovorin or high dose leucovorin and that went on for ten years. Then suddenly we’ve had the revolution led by oxaliplatin and irinotecan and now the biological. Now we’re beginning to get into this whole question of how we can get into the molecular predictors of who gets which treatment, tailor-made therapy for the right patients at the right time and, perhaps most importantly for patients, taking people with inoperable and incurable disease and using aggressive first line chemotherapy to bring them to resection with a chance of cure and a chance of being alive in ten years’ time. That’s been a major revolution if you look at metastatic colorectal cancer to liver, whereas if you went back even to 2000, ten years ago, of all the patients who had liver only disease...

And there were a lot of them.

A lot of them: 25% of all the patients with colorectal cancer, so 75,000 a year in Europe alone, of the 300,000 who have got colorectal cancer, we would only operate on 10%. You had to have a maximum of three metastases, it had to be confined to one lobe, it had to be metachronous presentation and a handful of patients got surgery. We’ve now turned it on its head, we will operate on anybody where we can clear out the liver preserving about 25 – 30% of disease free liver volume. That now means we can double or even treble the number of people we can operate on straight away, but more importantly of the residual 70% with modern chemotherapy we will get response rates of 80%, even 90% now. We can bring another third of those patients to liver surgery.

Congratulations on all of that because it has taken some brave leadership on your part and your colleagues but I think it’s getting there. I wouldn’t be too gloomy about other countries in Europe, I think, having worked in Holland myself for ten years, the Dutch will get there around that. I work now in the European Institute of Oncology in Milan where we have sixteen breast cancer consultant surgeons and that’s a strong message and our outcomes reflect that sort of expertise. Graeme, thank you very much indeed for giving us some time and I hope in the future we’ll be able to help you with your training and, down the line, all that distance learning video techniques because, of course, ecancer.tv takes video. 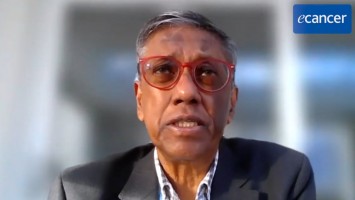