Prof Stupp speaks with ecancer at AACR 2017 about developing treatments for glioblastoma, from temozolomide and chemotherapy to novel tumour treating fields.

Prof Stupp describes how, by aligning polar molecules within cells using electromagnetic stimulation, it is possible to induce cell death within tumours, and summarises data from a randomised, multi-center phase III trial which he presented at a press conference, here.

He describes these results as a significant advance in treating historically aggressive and resilient brain cancers, and recommends it for use.

As you may know, glioblastoma is the most aggressive primary brain tumour in adults and it is usually quite an aggressive course and fatal. So for the last twenty years we’ve been looking at how to improve treatment in these patients. That’s how we had developed giving temozolomide chemotherapy together with radiation and afterwards as maintenance. It was the first significant improvement in glioblastoma.
In the early 2000s the concept of tumour treating fields came up. Tumour treating fields is exposing cells to an electrical field with an electrical potential. This causes polar molecules to arrange themselves in the direction of the field. If you start rotating the field many times you actually have the cells or the organelles in the cells, the polar molecules, to redirect according to the field and this has been shown in vitro and also in animal models to actually ultimately lead to disruption of the spindle apparatus and mitosis and ultimately apoptosis.

What were you looking at in your research?

In our research now we had to design a clinical trial that would definitely show that this is working also in the clinic. So the trial I’m presenting here is on patients with newly diagnosed glioblastoma who have completed chemo-radiation therapy and would go for maintenance temozolomide chemotherapy to which we added in one arm tumour treating fields. Patients were exposed to it continuously, so it’s a chronic treatment, together with the maintenance temozolomide and we’ve shown that we improve progression free and overall survival. So we’ll show here the results on all 695 patients treated, we’ll focus on overall survival. We see exactly the same results on the progression free survival endpoint as well and have been shown that we get a hazard ratio of 0.63, a 37% risk reduction in death or at two years from 30% to 43%, at three years from 16% to 26% and so on. So we see some patients now chronically treated surviving for a long time.

How does the treatment work?

The treatment is delivered through a device so it’s not a drug, it’s not chemotherapy, it’s a device that delivers the alternating electrical fields through electrodes that are in patches, arrays, on the scalp which has to be shaved, chronically exposed. So expose the brain, which is the site of the remaining glioblastoma cells that give rise to regrowth.

For ten years the first treatment that shows beyond doubt that we have an improvement in overall survival. So in my opinion this is now part of our armamentarium to treat glioblastoma and should be at least offered to every patient we see in the clinic. 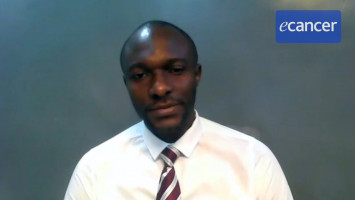