Dr Alibhai speaks with ecancertv at SIOG 2016 about the diagnosis of older men with prostate cancer and the side effects of hormonal therapies, methods of exercise supervision to manage side effects and how this can be linked to Parkinsonism.

We already know that prostate cancer is very common in older men, we also know that almost one in two men with prostate cancer get put on androgen deprivation therapy or hormonal therapy as it’s commonly known. There are a number of side effects of androgen deprivation therapy in men, particularly in older men – it can lead to reduced quality of life, increased fatigue, reduced muscle mass and a number of metabolic consequences such as osteoporosis and diabetes.

The single most effective treatment to prevent or treat the majority of these complications of androgen deprivation therapy is exercise. There are now over a dozen clinical trials of various durations, anywhere from 8 to 24 weeks, that have shown that you can improve quality of life, you can reduce fatigue, you can improve muscle mass, you can improve strength, you may even be able to improve bone density and reduce diabetes, all with this one intervention. If it were a pill it would be so easy to prescribe but exercise is not that easy to prescribe and there are a couple of remaining challenges in the world of exercise science. Three of them, in our view, are that we don’t know what type of exercise works best and what I mean by that is not aerobic versus resistance exercise because we know that both aerobic exercise, when you’re working on the treadmill or jogging, and resistance exercise with weights, they both have some advantages so that it’s not one versus the other, we really need both. It’s more the issue of how do you deliver the exercise. So the best method of delivery from the trials has been supervised in-centre one-to-one personal training. The problem is that’s not very feasible, it’s resource intensive, most men don’t go to a centre and virtually no government pays for a programme like that. So the question is can we find less resource intensive exercise delivery methods such as group supervised programmes or home based or other approaches that are cheaper and more scalable but just as effective and do we actually know the cost effectiveness of these programmes, can we formally evaluate it? Third, once you stop the formal programme, let’s say you’re in a period of supervision and then you’re on your own, can people continue to have long-term adherence because like in anything else with exercise if you stop doing it you lose the benefit.

So we designed a phase II randomised controlled trial that looked at three different methods of exercise delivery. Our gold standard was the supervised one-to-one personal training, we compared that with a group supervised programme and we compared that with a home-based programme that was unsupervised but supported remotely by smartphones and health coaches. The phase II trial was a non-inferiority study where we were seeing if either the group-based or the home-based programme were non-inferior to the gold standard. Because it was a phase II it was not meant to be definitive but rather make sure that these two programmes were not profoundly worse or potentially better so that we could go forward with a larger trial. What we found was that, first of all, conducting the trial was feasible although it took longer to recruit than we were hoping but that in most of the comparisons between group-based and the gold standard, as well as between home-based and the gold standard, on measures of quality of life and physical fitness the different modalities were similar. What that suggests to us is that going forward we should be able to design a multi-centre phase III randomised trial to test these definitively and we need to look at cost effectiveness but we know it’s feasible and both of those approaches seem, at least in the phase II, not to be significantly worse than the gold standard. So there are opportunities to study them more formally. That’s in essence what we found.

Could you speak on the rise of Parkinsonism with this therapy?

We know that, as I mentioned, androgen deprivation therapy is commonly used in prostate cancer and it profoundly reduces levels of testosterone but also reduces levels of oestrogens in men. Both testosterone and oestrogens have a whole host of potential effects on the brain, some of which may be deleterious, others may be beneficial. We know that if there is accelerated brain degeneration there is a higher risk of potentially getting Parkinsonism and Parkinsonism includes a series of different diseases like Parkinson’s disease and other secondary causes but the broad umbrella is Parkinsonism. There have been a couple of case reports and some anecdotes that suggests there’s an increased risk of Parkinsonism with the loss of testosterone but no study to date has looked at it on a large scale. So we used large linked healthcare databases to study a series of men who had prostate cancer and were on hormone therapy compared to men who had prostate cancer but were not on hormone therapy. We couldn’t randomise them, obviously, it’s an administrative database study. We tried to match them as closely as possible, followed them for almost six years to see if the incidence of new Parkinsonism was higher in men on androgen deprivation versus those who were not. In fact we found the opposite – that there seemed to be a protective effect with a reduction in the rate of developing new Parkinsonism in men on androgen deprivation therapy versus the controls. There are some challenges because it’s a relatively rare outcome and even with thirty-something thousand men in our study we only had about 1% developing Parkinsonism but it’s the first study at least to suggest and reassure clinicians that there doesn’t seem to be an increased risk of Parkinsonism. It may even be protective but we need more studies to understand why and to confirm what we found. But at least the clinical message right now is that there does not seem to be an increased risk of Parkinsonism in either younger or older men going on androgen deprivation therapy. 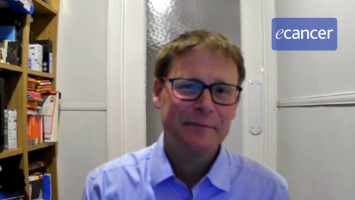 19 Nov 2020
What is global oncology and what is the presence of global oncology in Europe
Prof Cristina Stefan - Institute of Oncology 'Prof Dr Alexandru Trestioreanu', B...

24 Mar 2020
Where have we got to with cancer treatment?
Prof Alexander Eggermont - Princess Máxima Center for Pediatric Oncology, Utrech...