Dr van den Bent talks to ecancertv at ASCO 2016 about the early results from a European phase III trial which looked at the use of adjuvant temozolomide in anaplastic glioma.

It was found that anaplastic glioma patients without 1p/19q co-deletion benefited from this.


What we did is we investigated in an orphan type of brain cancer, anaplastic glioma, and then the ones without the 1p/19q co-deletion, so the ones that you would estimate less chemotherapy sensitive. We had some data back in 2005 that showed that temozolomide concurrent and adjuvant would improve outcome in glioblastoma and we had also failed to improve outcome at that time with adjuvant chemotherapy in anaplastic glioma. We also demonstrated at that point in time that the ones without the 1p/19q co-deletion, once tumours had actually appeared to be less chemotherapy sensitive, were also the ones with the far less outcome. We asked ourselves whether concurrent and adjuvant temozolomide in that patient category would improve outcome.


And what kind of results did you find?


It was striking, we didn’t anticipate any results until 2024. We had planned an interim analysis to be done after 41% of events had occurred. We enrolled 750 patients after screening 1400 patients and then the IDMC looked at the data and said, ‘You have to release the data on the adjuvant temozolomide treatment.’ What they had seen is that at five years after radiation therapy without adjuvant temozolomide 44% of patients were alive at five years whereas if you added temozolomide to the radiation therapy the five year survival increased to no less than 56% which is a hazard ratio of 0.64, a highly statistically significant p-value and survival curves that continue to separate over time. So this is really a striking finding.


And you mentioned the mutations, the deletions, there. Could you explain more about those and how they could be used as markers in the future?


We are currently using these markers to distinguish between what’s formerly called oligodendroglioma and what was now called astrocytoma. We know the pivotal role of 1p/19q co-deletion, we know also the pivotal role of IDH mutations which is something that we still have to look into in this study. But we are now distinguishing basically three types of diffuse glioma in adults, the one with IDH mutation 1p/19q co-deletion, the ones with only the IDH mutation and the ones with neither. This study has been looking basically at anaplastic glioma, probably most IDH mutated but without the 1p/19q co-deletion. Our current diagnostic system requires us to investigate or explore these markers in each of our patients.


Were there any changes in the fractionation of radiation for patients?


No, we could administer the temozolomide without any interruption. This is treatment that we know very well from the glioblastoma. If there are any interruptions it’s from the temozolomide but it rarely interacts with the radiation therapy. This is, we think, a well-tolerated and safe treatment. The adverse effects we saw were the 10% of haematological adverse events which are usually asymptomatic.


I was about to ask were there any impacts on, for example, side effects or patient quality of life associated with the extra therapy?


Here we have a problem. The IDMC recommended us to release the data on the adjuvant temozolomide; we don’t have the data on the concurrent temozolomide. So much of the results of this study remain in the black box and the question that you are raising on the quality of life we simply cannot answer as we do not have all the data. And that will take us another few years before we have this data. So we still have to wait for years before we have the final results of the study available.


They’re definitely results to look forward to. That addresses all the questions I have, is there anything that you’d like to add that we haven’t mentioned so far? 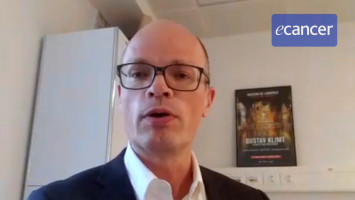