Dr Gomez reports that, based on the DSMC recommendation, the study was closed early due to the significant efficacy benefit observed in the study arm.

With these results, he is looking towards data maturation from overall survival times, and patient surveillance continues.


We will be presenting a phase II randomised study, multi-institutional, that examined the role of what we call local consolidative therapy or aggressive treatment to the known sites of disease in patients with limited or oligometastatic non-small cell lung cancer. There have been prior retrospective studies and preclinical studies that have suggested that some patients don’t progress as quickly with limited sites of disease but there has never been a prospective randomised study looking at this question. So we began this study about 3-4 years ago, about 3½ years ago, and ultimately enlisted three institutions for enrolment – MD Anderson Cancer Center, London Ontario Health Sciences Center in Canada and the University of Colorado in Denver. Patients were eligible if they received front line systemic therapy and then after front line systemic therapy did not have progression of disease. There were three different types of regimens that we accepted for front line systemic therapy depending on the molecular status of the patient’s tumour. So for all patients we accepted platinum doublet therapy; for patients with an EGFR mutation eligibility also included three months of erlotinib, afatinib or gefitinib and for patients with an EML4-ALK rearrangement crizotinib was allowed.


Patients were then randomised in one of two arms; the first arm was local consolidative therapy during which they got radiation or surgery to all of the remaining sites of active disease. The other arm was no local consolidative therapy, where they received standard of care and this could be either FDA approved maintenance therapy or it could be observation, particularly for the case of squamous cell carcinomas.


So the study was planned for a total of 94 patients, estimating a hazard ratio of 0.57 which was an improvement of 4-7 months in progression free survival. The study was anticipated to take approximately four years. However, the study also underwent annual reviews by the Data Safety and Monitoring Committee and at the annual review in December of 2015, early January 2016 the DSMC recommended closure of the study due to a significant improvement in the local consolidative therapy, or LCT, arm. So the PFS rates in the two arms, in the standard arm it was 3.9 months, which was very close to our hypothesised 4 months, but in the no LCT arm it was 11.9 months, compared to our hypothesised rate of 7 months. So this was highly statistically significant and the study was closed. The overall survival data is not yet mature, we’ve have a limited number of deaths in each arm, and many patients did cross over from the no LCT arm to the LCT arm at the time of progression.


We also looked at two exploratory analyses, the first is we took out the patients with EGFR and EML4-ALK alterations and the results held with a hazard ratio of 0.41 compared to a hazard ratio of approximately 0.35 in the total cohort. We then looked at a new variable, something called time to new lesion failure where we determined the time in which patients developed new lesions and we did so because we inherently knew that patients that didn’t get radiation therapy or surgery to the local sites would have a tendency to fail there. We looked at this variable and we found that the progression free survival benefit remained with PFS times of almost 6 months in the no LCT arm and 11.9 months in the LCT arm. Finally we looked at toxicity, there was no substantial difference between the two arms. Three patients in the no LCT arm crossed over to the LCT arm prior to progression due to toxicity. These included hematologic toxicities, renal toxicity and fatigue. In addition another patient that was actually randomised experienced bilateral lower extremities that was thought to be due to the pemetrexed and this toxicity resolved when the pemetrexed was discontinued. There were several grade 3 toxicities in the LCT arm including grade 3 oesophagitis in two patients, one patient with anaemia after radiation to the spleen, an additional patient with a rib facture potentially causing a pneumothorax after SBRT and one patient with pain that was thought to be unlikely related to radiation therapy. So approximately 4-5 toxicities in each arm but no grade 4 or 5 toxicities in each arm.


From all this we can conclude that in this phase II randomised trial of 48 evaluable patients that LCT provided approximately an 8 month progression free survival benefit compared to the standard or no LCT arm. The overall survival data is not yet mature but toxicity appears to be the same between groups. Looking at this it’s a provocative study demonstrating the need for further trials and future analysis and a definitive study attempting to answer this question.


You managed to get to every question I could ask before I asked it and I don’t think I had to a single word in that. That was damn near perfect if I do say so myself.


Is there anything you’d like to add on top of that, anything you think is worth mentioning or might come up over the course of the press conference?


Well if you’ve got the… you said you were releasing it tomorrow? 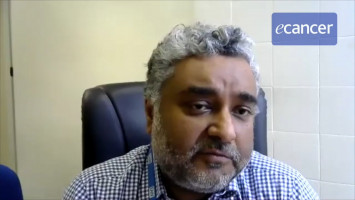