Dr Goldstein speaks with ecancer at ASCO 2016 about his research into global drug pricing, with specific focus on the cost-effectiveness of bevacizumab.

In the United States, the addition of bevacizumab to 1st-line chemotherapy in metastatic colorectal cancer provides an additional 0.10 quality-adjusted life years (QALYs) at an incremental cost-effectiveness ratio (ICER) of $571,240/QALY.

With this as a comparative value, he sets out the international variation of treatment cost, and discusses the potential drivers of economic fluctuations.

Addressing the wider variability of drug pricing between countries, he examines the relation between drug availability and GDP.


I have two presentations here, the first one is a poster which is a poster discussion session about the cost effectiveness of bevacizumab in metastatic colorectal cancer. We built an economic model analysing cost effectiveness that we published in The Journal of Clinical Oncology last year and that was from the US payer perspective. We demonstrated that with approximately a six week survival benefit with that drug and with the cost incorporated in this economic model we found that bevacizumab cost approximately $500,000 per quality adjusted life year, or per QALY. Then what we’ve done in this particular study is that because drug prices are different between countries we then recalibrated, we then inserted prices from a number of different countries. So in that study we inserted prices from Australia, Canada, the United Kingdom, Israel and then compared it to the US analysis. Then we found that because the prices are lower then how that impacts the level of cost-effectiveness and that the cost-effectiveness was significantly lower, at round about $300,000 per QALY in those other countries. Even though it was lower it was still above what is commonly accepted as the cost-effectiveness thresholds which in some countries are considered to be round about $50,000 to $100,000 per QALY.


Of course that then comes into their economic standing as a nation.


Yes, so it’s $500,000 per QALY. Yes, it’s a very high level of cost so ultimately the benefit of the drug is minimal, a six week survival benefit, the cost is high, quite a significant duration of therapy as well. So, yes, it’s high cost, minimal benefit so it comes out at that level. Obviously in the UK for drugs to be approved by NICE they have to be beneath a threshold of approximately £30,000 per QALY, so around about $50,000 per QALY. So to put that into perspective the $500,000 per QALY, it’s low level of cost effectiveness and poor value.


You mentioned that the prices, the cost of each of the courses of treatment, would vary from nation to nation and this was the topic of your second talk?


Yes, so in the second study that we’ve done we’ve analysed, we took about 25 cancer drugs and eight of those were patented and about fifteen or so were generic and we got prices for these drugs in multiple different countries – in India, South Africa, China, England, Israel, America – and then we compared the prices between different countries to see what was the difference amongst all these cancer drugs and the prices. Again, we’re seeing that America is paying much higher prices compared to other countries. However, we’re seeing that India, Australia, United Kingdom, China are paying similar amounts to each other which then brings into question about the ability to pay because obviously people in some countries are wealthier than people in other countries and what is their ability to pay for these drugs?


So what we did as part of this analysis is that we took GDP per capita and then divided the monthly drug cost by the GDP per capita to try to understand ability to pay for these drugs. And we saw that even though the prices are lower in places like China or India because their GDP per capita is so low then the level of affordability was very poor for these drugs. Conversely we can see that in the United States, even though they have the highest GDP per capita of the countries that we analysed, given the fact that their prices are so much higher their affordability was lower compared to countries like the United Kingdom or Australia.


So there’s a certain market influence of where the money is the money will follow?


It’s probably more related to the reimbursement policies and what policies are in place. But it really brings up some really important ethical questions, so for some of these countries where their ability to pay is very low but some of these drugs have the potential to be life-saving. Now the drugs that we analysed were very varying as to the level of efficacy. We included imatinib which has revolutionised the treatment of chronic myelogenous leukaemia and we also included bevacizumab which adds six to eight weeks of life for patients with metastatic colon cancer. So very different levels of efficacy but it brings into light the question of in poorer countries where the affordability of these drugs is poor but some of them are potentially life-saving and curative treatments then we really have to think is it ethical for these drugs to be unaffordable.

12 May 2020
Where have we got to with cancer treatment?
Prof Alexander Eggermont - Princess Máxima Center for Pediatric Oncology, Utrech... 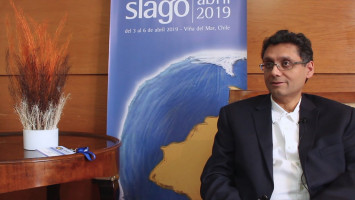