Paediatric and adult high grade gliomas: A tale of a histone tail

Single nucleotide polymorphisms that occur within the epigenome can alter the structural assembly of proteins and the function of cellular components, with Dr Jabado reporting on a handful of mutations that can alter cell architecture, resulting in a pluripotent and resistant cancer.

She also describes the incidence of ependymoma, apparently not characterised by mutational origin, but a structural malformation that results in high mortality.

Paediatric and adult high grade gliomas: A tale of a histone tail


We’ve been trying to analyse samples from these deadly tumours in children and we’ve actually had a very unexpected finding that took us to places which we never thought we would go. We found mutations that are affecting histone genes and histone genes are really the very fundamental unit of our epigenome and the way we can fold and unfold our genetic information for it to make sense. Those mutations were really quite key and those are drivers and we’re trying now to understand what are they doing to animate and drive these very deadly tumours.

Can you tell us more about these mutations?

Those mutations have been actually published in Nature in 2012 and we’ve had subsequent papers on other things. They affect two specific residues within a histone tail, the histone-3 tail, a lysine 27, this is a repressive mark, like the most repressive mark, when it’s trimethylated, and it’s changed to methionine and lysine 34 that’s changed to an arginine or a valine. What we believe is those mutations are really reshaping the epigenome, almost making it like the transformer from a car to a monster truck or to Godzilla. It’s really what it is, it’s probably reshaping the genome into an architecture that’s more like stem cell and making it very intractable to treat.

What causes these mutations?

What’s very intriguing is that we have more than about, I would say, twenty isoforms, and I’m being very cautious, of histone-3. Those mutations seem to occur whether it’s in the K27 mutations, occur either in the canonical but in the non-canonical histone and they all want to change from a lysine 27 to methionine. They’re acting as dominant negative because it’s only one of those twenty that’s mutated, however we and others have shown that there is absolutely no trimethylation that abrogates the cross-translational modification on the other lysine 27 on other histone-3 that are normally expressed in wildtype.

Have there been any chemical or radio signals that have influenced DNA structure?

I wish we knew. Again, it’s quite an evolution that we are trying to change things. So in every single new cell there is a new mutation. A lot of them are silent and not even carried on, others potentially give you a slight advantage and, for some reason, we seem to keep them. The IDH mutations are exactly… they are the counterpart and actually mutation in the K27m mutation and the G24 mutation that I’ve been describing are mutually exclusive with each other and with the IDH mutation. You can’t have both of them, they seem actually to converge on the same thing. Why does the IDH mutation happen? We don’t know, it’s not associated with anything that we yet know is happening but probably it’s the way our brain or our cells have of sampling what is it that could be of advantage for them and some are wrongly routine.

What kind of gene therapies are used to manage and treat these conditions?

There are no gene therapies. I wish we could use the CRISPR model or whatever without doing any… it’s not happening yet. So we’re still very basic in our way of treating them and the survival rates are barely 10%, and I’m being very generous, at three years. So those are still… even if we know a lot about them we haven’t yet made a dent into how we are managing these tumours. Again, all of those tools, the gene therapy and whatever, are being considered and we’re trying to do some stuff but it’s not yet happening.

Are there similar issues coming out of mutational cancers found elsewhere in the body?

For example, what I haven’t said is that in the brain those mutations in histones and IDH mutations, actually, are always associated with partner mutations that are called partners in crime. We have a recent finding where we showed that the histone mutation occurred first but very fast, like the IDH mutation, in order to become tumours need an associated partner in crime. Those partners in crime are very faceful, meaning when it takes them it doesn’t let go. After that you will have other mutations, other alterations that are going to be subclonal and maybe affect the way it grows but the first association is non-random and partners that you need. In 10% there is a specific partner that’s a kinase and this partner is found in every single mutated tumour cell. So this one, potentially, could be amenable to targeting and there are some people over here that are working on this kinase and trying to design drugs. And this, for 10% of those patients, when it happens will be very relevant. So this is the type of information that I try and come and seek even more here.

What other cancers are associated with this structural change?

There is another brain tumour that we’re not the main people working on it but we’re collaborating very strongly. Why? Because it has a K27 me3 signature, it’s called ependymoma and those tumours really have no mutation, no alteration. They seem to have the most stable genome. Still the survival at ten years is barely 10-15% and it’s almost as if something happened that either put the cells in the shape that it should never have, like the prion stuff, or they were stuck at the developmental stage, that’s very early, and we need to know based on other studies that are trying to look at brain structure and brain development where we don’t have this. One of the things that is still missing, even though it’s getting better, is the blueprint. What to compare to? Brain development is very complex, many cells, many different cells and having the real blueprint is going to be something that’s also important in order to understand what are those mutations in those paediatric brain tumours doing.

They do contain a lot of answers so we’ve made use of those data, like data from the Encode Brain Atlas, you name it, even TCJ. I think they are complementary to many things. All data have limits, as long as you understand them and you take advantage of what’s there and you try to improve on it, there are really things that are very, very precious. We have a paper where we showed in another very embryonal brain tumour it’s actually either a pathway that was present during development that’s reawakened or it was stuck at that time. We only could make it because we had those data available. So what we showed is that there was actually a fusion between a gene that’s only expressed in the brain and we didn’t care about the gene because this was a little bit part of it, and microRNAs. And the promotor was the one that was needed because those microRNAs needed expression and they got the promotor expressed and then you go and you reawakened the DNMT3B which is a de novo methyltransferase that’s only exquisitely expressed between eight to twelve weeks of gestation and never after. Using an alternate promotor for this that’s only open during eight to twelve weeks and never after and those microRNAs usually are only expressed in the placenta between eight to twelve weeks and never after. So it’s all through this brain tumour that either get stuck in time or reverted that we were able and it’s only because we had access to those data that we could make sense of our finding and try and understand what was this tumour happening. So, yes, those big data are very important.

Can histone mutations be used as a prognostic indicator?

One of them, the K27M, they die barely within a year of diagnosis. There are very rare exceptions, so please I need to note that, but the vast majority, I would say 99%, die within a year to eighteen months. So they are prognostic factors. But we know that those glioblastomas die within… patients die within two to three years. Those ones will do even worse and very fast.

For me the way of seeing a happy ending, I see those patients, I treat them, I have no answer today. But at the very least I know we’re looking in the right direction. Initially we weren’t looking at all there, the epigenome was never to be found. So the moment you start knowing what is your problem it’s going to happen. I wish it was yesterday but it’s going to happen because put the tools with the new things with the collaboration and this type of meeting is actually quite key to even more strengths and collaboration and open up new ideas. 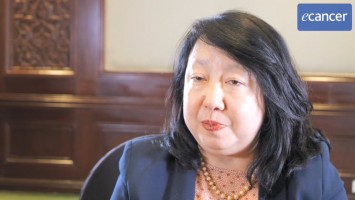