Linguistic considerations in cancer-related dialogue and their psychosocial impacts

Dr Koller talks to ecancertv at NCRI 2014 about cancer metaphors, such as those relating to journeys or war, and their psychosocial impacts on patients and their families.

Click here for more information on the "Metaphor in End of Life Care" project.

I’m presenting a study on metaphors for cancer titled A battle or a journey? As part of the project we’re looking at how patients, cancer patients, unpaid family carers and health professionals use metaphors when they talk about cancer, the experience of care, including palliative care, that they receive. We’ve chosen to focus on those two metaphors because they have been quite widely discussed and also criticised. We’ve done a large scale study where we looked at 1.5 million words from these three groups from interviews and how people discuss with each other on online fora to see what metaphors are used, if one is used more frequently than the other or perhaps in different ways etc. So one battle metaphor, or sometimes also referred as a war metaphor, would be when a cancer patients says, “I’m fast becoming a chemo veteran,” where she likens the experience of having various rounds of chemotherapy to the experience of fighting in a war, so perceiving a similarity there. And a journey metaphor, also very, very frequent in our data, would be, “malignant melanoma is a hard road to travel,” for instance.

We found that all three groups use these two metaphors, battle and journey, very regularly but there are differences between the groups. So for what we call violence metaphors more broadly, so battle, fight, war etc., that is mostly used by patients and least by healthcare professionals which may be to do with the fact that official documents in the UK have recently very carefully avoided any battle metaphors. So the Cancer Reform Strategy or End of Life Care Strategy are very studiously avoiding these metaphors and rather using things like clinical pathways, the cancer journey etc. For the journey metaphors it is also used mostly by patients but what we found for both metaphors is that they can be used in very different ways. So very often the criticism is avoid any battle metaphors, they make patients feel awful and that certainly can happen if, for instance, the metaphor means that they perceive themselves as failures for not winning a battle etc. But in our data patients also used it in very empowering ways. So they talk about being born fighters, about wanting to beat cancer rather than being beaten by it, so a sense of determination there really, which some patients seem to find helpful. Reversely, the journey metaphor sometimes could be less than empowering. So people say, “I’m not supposed to have to navigate this road. I don’t even want to be on it. It’s like driving up a hill with no horses and no brakes,” or what have you. So very difficult, impossible journeys, unwanted journeys etc.

Our method, as I said, we looked at 1.5 million words in total. So from these three stakeholder groups, patients, family carers and healthcare professionals, and we looked at interviews with all three groups and at data from online fora where they discuss amongst each other. So we’re not looking at how patients communicate with healthcare professionals but how they talk amongst each other, really. Our team consists of linguists and palliative care specialists but also computer scientists because part of the method of analysing our data is computer assisted so we’re using specific and also adapted software in order to identify words and phrases that could well be metaphors in our data, simply because the number of words that we looked at is so large. We started out with identifying a small sample by hand, the metaphors, and then scaled that up through a quite complex procedure to look at the whole corpus with the help of computer software.

Our conclusions are that both violence and journey metaphors can have a positive or negative effect, empowering or disempowering, on some patients in some situations. So we would advise not to downright reject one metaphor, like all battle metaphor is bad or all journey metaphors are good. It really depends on who uses them in what context. We would want to differentiate between battle metaphors that are clearly psychologically damaging for the patient such as, “I’m losing this battle,” but also advise that they can be used in an empowering way. We would like to raise awareness in healthcare professionals that things are rather complex and it’s not one metaphor good, another metaphor bad but that they have to look out for how they are used, in what context and by whom.

Doctors should be careful with what language they use?

We wouldn’t advise that doctors impose violence or battle metaphors because they can definitely have a disempowering and detrimental effect on patients but also be aware that it’s not a black and white picture, quite simply, and generally be quite careful with language themes.

We’re currently working on what we call a metaphor menu, if you will, where we have collected examples from our data of patients using various metaphors which we would like to trial and ultimately distribute via oncologists to patients. So just to give them more resources of how to speak about their illness. 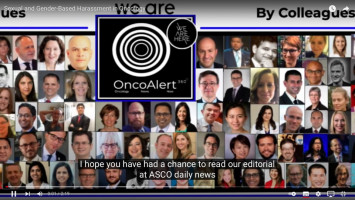