Prof Lefebvre talks to ecancertv at ESMO 2014 about the Make Sense campaign, and the ways in which they are raising the public's awareness of head and neck cancer.

Jean-Louis, I gather there’s quite a history to the word sense, nonsense, senseless, because it has been concluded in the past that it’s senseless to have such a late diagnosis in head and neck cancer. People have been talking about senseless, you had a campaign in the past with actors in it, well right now you have the Make Sense campaign. Could you tell me why have you got the Make Sense campaign associated with head and neck cancer?

And how much of a benefit could there potentially be by getting more awareness going and perhaps diagnosing earlier?

So could you give me some examples of what you have, in fact, been able to do to improve this communication?

Last year we had the first Make Sense campaign and the major goal of this campaign was to improve awareness in the general population as well as in healthcare providers. So we designed a brochure, a leaflet, that was distributed throughout Europe explaining in a very easy to understand way what head and neck cancers are: oral cavity, pharynx, larynx, nasal cavities; the risk factors: tobacco, alcohol and, to a lesser extent, viruses and in particular the papilloma virus and after the presenting symptoms: difficulty in swallowing, change in voice, otalgia, lump in the neck or bleeding. We said should you have one of these symptoms for three weeks, yes, at that time you need a medical examination. That was the leaflet – One for Three.

It was for the primary care specialists and also for the general population so it was distributed everywhere.

So what would you like cancer doctors to do about all of this because clearly there needs to be a closer meeting of the primary care physicians with the cancer doctors?

What we wanted to do with the healthcare provider is to remind them that, for example, an otalgia occurring in a smoker and a drinker could be an otitis but could be also a revealing symptom of a pharyngeal cancer for example. Because, of course, during their life the general practitioner has to treat much more otitis than cancer of the head and neck so there is a confusion in their feeling of what could be an otalgia.

Is there a way that cancer specialists could help the primary care doctors to reach these suspicions more easily?

So what is the take-home message that you would like to leave everybody with?

The take home message is that the earlier the diagnosis, the better the outcome in terms of survival, in terms of cure and in terms of functional results and cosmetic results. 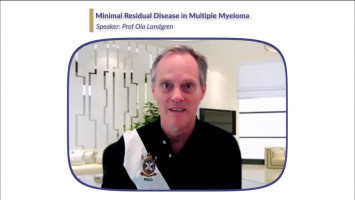