We were interested in determining whether there would be any utility or any real-world benefit to adding gemtuzumab ozogamicin for the treatment of our newly diagnosed acute myeloid leukaemia patients. In the past studies have shown that the addition of gemtuzumab to standard 7+3 intensive chemotherapy resulted in an overall survival benefit for patients with both favourable risk classification and intermediate risk classification. However, many clinicians who treat acute myeloid leukaemia patients do not incorporate gemtuzumab for the treatment of the intermediate risk AML patients, both because the overall survival benefit was less than in favourable risk but also because of the fear of toxicities related to the addition of gemtuzumab, specifically prolonged blood counts, thrombocytopenia and the risk of veno-occlusive disease for patients proceeding on to subsequent allogeneic stem cell transplant.

What was the study design?

We have been using gemtuzumab ozogamicin as part of our clinical practice for several years so we decided to take a look at our own experience. We performed a retrospective analysis looking at patients treated with 7+3 and 7+3 plus gemtuzumab ozogamicin dating from 2015 up until the present time. We identified 80 patients who had intermediate risk cytogenetics who received 7+3 alone and then also identified 33 patients who had intermediate risk who received gemtuzumab ozogamicin. We analysed our clinical outcomes to see was there improvement in outcomes, what times of outcomes, what about minimal residual disease, patients going to transplant and just overall survival.

What we found was that the 33 patients who had gemtuzumab ozogamicin incorporated as part of intensive induction and consolidation chemotherapy had a significantly higher composite CR rate of over 80% versus 55% in patients getting 7+3 alone. We also saw that out of the patients who had measurable minimal residual disease measured at the time of their remission that 100% of patients receiving GO in that up-front regimen had MRD negative remissions as opposed to 80-something percent of patients who had the same test done at the time of their remission after 7+3. We noted no increased toxicities with the incorporation of our standard low-dose heparin as part of allogenic stem cell transplantation prophylaxis; we saw no evidence or no incidence of veno-occlusive disorder in our patients who received GO.

We did not see a difference in overall survival and that may be because the numbers of patients treated were lower, only 33 as opposed to 80, and because the patients treated with GO were treated more recently because in our country GO was not approved for incorporation into up-front chemotherapy until 2017. So the follow-up on our patients with GO was quite much shorter than those that had gotten historic 7+3.

The clinical impact is that, number one, we do think that incorporation of GO for our patients with intermediate AML may lead to improved outcomes. We certainly saw improved rates of composite CR and we saw, not surprisingly, increased numbers of those patients proceeding on to a potentially curative allogeneic stem cell transplantation.

Secondly, we saw no increased incidence or difficulty in transitioning them to that transplant and no evidence of VOD. Thirdly, we did see some evidence potentially early on that there may be a survival benefit. So we believe that for patients who have intermediate risk AML who are proceeding to transplantation that the incorporation of GO in up-front therapy is safe and effective and may make us more able to transition those patients to an allogeneic stem cell transplantation without additional toxicity and higher rates of MRD negative disease.

Now, we do know that there are some molecular features that could portend for inability to achieve those responses so we’re looking at whether we could think twice, maybe, about patients that have some of those mutations but we think that our data really supports the use of this agent in up-front therapy. We did importantly have about a two-month window between the last dose of GO and the performance of that allogeneic stem cell transplantation which has been shown to be effective in prior studies. We think this deserves further consideration – many centres, again, do not incorporate GO and we were curious to know that, in our centre at least, that this seemed to improve outcomes. This probably does need to be looked at in a larger sense but we are going to continue to accrue patients to what we think is a highly effective up-front regimen and hopefully improve these outcomes for these patients moving forward.

Our study does have the limitations and that is a single institute study, small number of patients, single academic centre and there is always the thought that potentially maybe these patients were selected for treatment with GO based on other factors. We’re not sure, again we’re going to be looking at our data and maybe in other centres and moving forward to see whether there was potentially some selection bias. 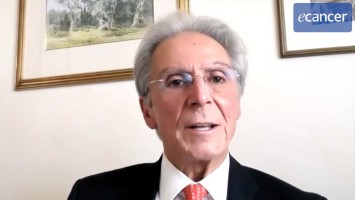