Effects of maternal chemotherapy on children

Dr Amant talks about a follow up study on children whose mothers were treated with chemotherapy during their pregnancy.

Talking at the 1st Cancer and Pregnancy Meeting in Milan, Dr Amant addresses preconceived notions about the effects of chemotherapy on the development on the foetus and during the development after birth. The results from this study also address the question whether or not treatment to the mother should be delayed.

Effects of maternal chemotherapy on children

We reported the results of a study that we initiated in 2005 where we looked to the outcome of children who have antenatally been exposed to chemotherapy. We examined these children on pre-defined ages, that means at birth, at eighteen months, five to six years and then three yearly thereafter. We looked into detail into their intelligence, into their behaviour, attention, general health; the parents filled out a questionnaire on their health and on their behaviour; we looked into their heart function. So all seventy children we reported on were older than eighteen months, so this is some time evolution that we take into consideration already. Looking into these data then, we see that these children perform as other children of the same age, we do not say that we see no problems but we see the same problems as children from the same age-group. One important conclusion is here that if we saw problems we saw them more in children that were born pre-term, before 37 weeks, so this is, according to us, one of the main conclusions of this study, that probably prematurity, for example, is more a problem than actually chemotherapy because children who were born at term with chemo during pregnancy, they performed excellent. So this is one of the major conclusions and I think this is one of the first times that actually children have been examined after antenatal exposure to chemotherapy. So that’s why we believe it’s important for clinicians and for patients to help to take a decision regarding cancer treatment during pregnancy.

About the impact into the clinic, I think that the study has an impact on three levels or three situations. Firstly we think that the fear for chemotherapy should not be a reason for termination of pregnancy, maybe there are other reasons to terminate pregnancy but the fear for chemotherapy should not be a reason and this is a difference with the past where they said chemotherapy may induce malformations or long-term problems and we don’t know it, and that was a reason for patients to terminate a pregnancy. Secondly, in the past frequently chemotherapy was postponed until the baby was viable and that can, of course, impact the maternal prognosis if you delay the treatment. So we believe that fear for chemotherapy should no longer be a reason to delay maternal treatment. And then thirdly, probably the chemotherapy can be used to get the foetus not viable but mature and that we should stop inducing delivery. So the decision to prematurely let the baby be born, we should stop it because we’ve shown that the baby has problems with pre-term delivery and that the cognitive function is worse when they are born pre-term. So maybe giving chemotherapy during pregnancy until the baby is mature is the best option for the baby and in the meantime you treat the mother. So you take into consideration the maternal importance as well.

Did you subdivide the different types of chemotherapy?

I think the group is too small to look into that; what we can say is that 52% of women from our series were breast cancer women, that means that the chemotherapy used for breast cancer patients is predominantly at present in this study but in total we report on 236 cycles of chemotherapy, but we report on 22 different types of chemotherapy. So it’s actually very difficult or impossible at this stage to look in particular to one type or one regimen of cytotoxic drugs. We hope in the future to include more children and then we will be able to answer the question per cytotoxic drug.

The oldest, we had two children who were eighteen years old. So that gives you an idea about the design of the study which was prospectively but also retrospectively. So we went back in data sets and we looked who previously received chemotherapy. So we had these women at the beginning who more than ten years ago already received chemotherapy. So now we can look into these children and they are sixteen or eighteen years old and they do well, they perform well, they go to school, they perform as other children.

Are doctors now better informed about the treatment options for pregnant women with cancer?

Until now the pregnancy or a pregnant woman was really protected by saying that they cannot use any drugs, they have to take care what they eat, they have to be careful with everything they do because all the drugs, they are not tested in pregnant women, so all the manufacturers protect themselves by saying this medication you cannot use during pregnancy. Here we provide data and we prove that actually these children were exposed not only to chemotherapy but also to other drugs, co-medications. 10% of children were exposed also to radiotherapy, whose mother received radiotherapy of other parts of the abdomen of the body. So I think that we should consider a pregnant woman as a woman and that we should not always not give any treatment just because of the pregnancy. So that’s important advice and I hope we can convince doctors that one of the most toxic drugs is possible during pregnancy and that we also can explain why this is because in our study all the drugs were given after the first period of pregnancy, which is the first trimester, which is the period of the organogenesis. This is the most vulnerable phase so if you give chemotherapy afterwards then the pregnancy is less sensitive to the drugs.

The second reason why we can explain to the patients why this is quite safe is that in other studies we have shown that the placenta filters the chemotherapy so not all the chemotherapy which is in the maternal blood will actually go into the foetal blood. So the placenta is really a filter and we’ve proven this. So we see that the children are normal and we can also explain why this is, so I think this is a strong argument for doctors to really say to patients, “Listen, you can get this treatment and it is not likely to be harmful for the baby.” But we have to also be careful because it certainly is a nice group but it should be better, a higher number. Although we have children of eighteen years, the median follow-up is 22 months so we want to have this longer as well and then we want to increase numbers so that we can define per drug what are the effects, so we have to be still a bit careful. But on the other hand if a child at eighteen months is really normal, this is really predictive of the long-term outcome because all the functions are there and if the child is functioning normal it is still early but nevertheless it’s a strong predictive factor of late normal outcome.

Is the ‘Cancer and Pregnancy Task Force’ developing treatment guidelines?

The task force is not really intended to construct guidelines, the task force is mainly intended to provide a network, to construct a network, in order to increase the numbers, to increase the accrual because cancer in pregnancy is not common and all specialists, all hospitals, have at least one or two cases a year. Every hospital, every centre on its own is actually too small to get important conclusions so by pooling all this data I hope to provide more solid data on all types of cancers. It’s also an educational point of view because by doing this, all these task force members when they go to their own centre, they go to their own countries, they will distribute the message that actually how cancer patients during pregnancy should be treated. Then an indirect outcome of our guidelines, but I think it’s the main goal of the task force, is collecting data and educational matter, also to support people at their own centre to start with such a study, with collecting the data, because it’s always time consuming, it’s not so easy to put efforts in a project where a small number of patients are considered. So they have to have a good argument to their promoter or to their boss to invest in this research and then they can say, “Listen, this is a European network where we are part of it,” so that can help them to promote the research in their own setting. By doing this we have now registered 566 cases so now we can start looking at any organ, for example brain tumours, we can look into thyroid cancer and we can construct a large series of a very uncommon disease and that will inform clinicians how to treat these women.

Will this be more difficult in the United States?

I hope maybe that in the States our new data will have the most effect because actually in Europe we are already a long time we give this chemotherapy. So it’s not so new in our centre; it’s new that we have these data but we already for a while give chemotherapy during pregnancy. I don’t know the practical situation in the United States but the system is completely different and we have these stories that lawyers are standing everywhere to patients that they provide help if there’s any problem and, of course, until now we had no good data about the long-term outcomes, so given this fear for doctors to be in conflict with a patient in case there would be any problems that might have motivated them to interrupt a pregnancy or at least to suggest to interrupt a pregnancy. We hope now that we can provide that safety data and that women no longer are forced to have an interruption or to have no cancer treatment or delay of cancer treatment. So maybe in the United States the effects of the results might be positive and higher, actually, than in Europe or at least in our centre. 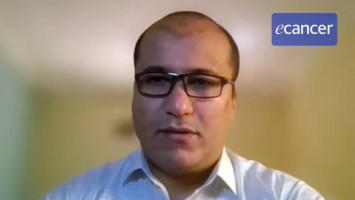 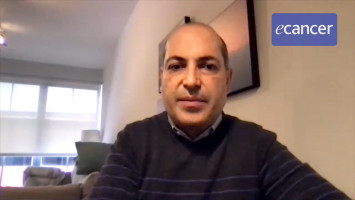 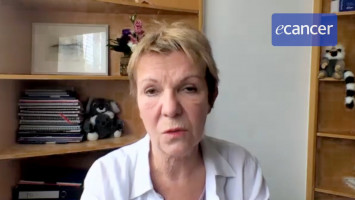