Message from the President-Elect of ESTRO

Prof Donal Hollywood, the President-Elect of ESTRO talks about the organisation’s new clinical research programme for European radio-oncologists. This programme will address areas such as stereotactic radiotherapy for metastatic disease of the liver and the lungs, the design of new clinical trials looking at combining novel targeted drugs with radiotherapy and the development of guidelines for European practice in terms of novel biomarkers or radiation response.

Prof Hollywood concludes by explaining the problems that have been caused by the exclusion of older patients from clinical trials and discusses the work ESTRO will be doing to address the treatment of elderly cancer patients. At the 2012 ESTRO meeting in Barcelona there will be a dedicated section of the meeting considering the best approaches for the treatment elderly patients with multiple comorbidities.

Message from the President-Elect of ESTRO

Donal Hollywood, thank you very much indeed for coming to tell us about this very exciting meeting in Barcelona, May next year, ESTRO.

You are the President-Elect and you have had the responsibility of setting up the clinical programme. You’re from Dublin, tell us about yourself.

I work as a radiation oncologist in one of the large teaching hospitals and have an academic appointment in Trinity College, Dublin. So my work would balance probably 60% clinical practice and 40% protected time for research. I’m also the national lead and academic lead in radiation oncology in the country. We’ve moved to a new national programme to try and deliver uniform standards and uniform quality of radiation therapy within the country, which is a radical change from what was the case in the past.

But this is a European role you have now?

And it’s taking what you’re doing in Ireland into Europe or is there a two-way…?

I’ve worked within ESTRO for over fifteen years and I’ve been very fortunate this summer to be elected as President-Elect from September. So I’m really looking forward to the challenge but I have been quite involved with ESTRO in a number of different projects in the last number of years.

So now you’re moving into a really hands-on planning role for this meeting, this is a tough assignment - to make a new research clinical results programme for every radiation oncologist in Europe, presumably? Tell me what it’s all about, what have you got in mind?

Specifically for ESTRO in Barcelona next year we always approach most of the major anatomic sites and have updates on those common areas for practice for European radiation oncologists. We also take a couple of topics which are emerging, so next year we’ll be looking at the challenges of delivering stereotactic radiation therapy for metastatic disease which is an exciting new area of practice both in lung and in liver metastasis. We’re also looking at the emerging area of new clinical trial design for phase I radiation oncology trials using novel targeted drugs together with radiation therapy. That has very significant challenges for us as a clinical group. We’re linking that in with some of the work that we’ve been doing to develop guidelines for European practice in terms of novel biomarkers of radiation response, and again I think that’s going to shake the way we practise in the future and move away from some of the more standard outcomes that have been looked at in terms of radiation therapy, but also bringing it back to relevant clinical practice. We recognise within Europe that there is a very significant emerging increase in cancer in the elderly so we have a dedicated track in ESTRO Barcelona looking at all of the challenges in treating patients who have multiple comorbidities that are associated with age.

There’s a lot of evidence of ageism, isn’t there? You’re taking this on the chin and tackling it?

We recognise that age is a compounding or complicating factor in the treatment of many of the adult solid tumours. I think in principle all oncologists would say they are not ageist but in practice we have to reflect the fact that age has an effect on tolerance of treatment. Anyone who has been in practice for even a short number of years will recognise that they modify treatment according to the challenges of a patient having an advanced age and a number of comorbidities. And that is a particular challenge of radiation therapy.

And, of course, we have excluded elderly people from a lot of our clinical trials which is idiotic.

Which means that it’s not necessarily the case that we can extend the treatment principles from those trials to the same age group, we recognise that.

We’re short of the evidence base.

There is a compelling requirement for clinical trials that include patients up to the age that we’re actually treating them in clinical practice which means including people in future clinical trials in their eighth and ninth decade, which will be a very significant challenge in terms of compliance.

It sounds a very exciting clinical programme and I look forward to interviewing you in Barcelona in May next year at ESTRO 31. 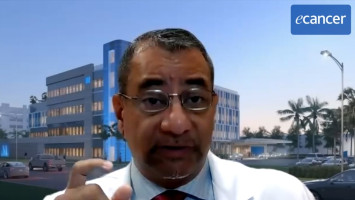