I think the highlight of my Presidency is that ESGO is really making a transition from being an organisation that was very much focussed on physicians and especially surgeons; it’s now becoming more multidisciplinary and also now ESGO is trying to squeeze in, for example also at this meeting, more molecular biology, more translational research, more basic research. And the reason, of course, is that there is so much going on in that field and that impacts so much on how we’re going to treat our patients within the next ten to twenty years that that’s really our efforts to do so.

What targeted therapies and upcoming trials are in the pipeline?

The problem, of course, is that there are many, many new targeted agents and it will be impossible to evaluate them all in gynae cancer. One of the reasons is that if you compare gynaecological cancer, for example ovarian cancer, with breast cancer from a more epidemiologic point of view, then the difference is that there are few ovarian cancers. And especially when you think about the molecular biology in the next ten years we won’t speak about ovarian cancer any more but there will be, let’s say, four, five, six, seven subtypes of ovarian cancer which will even more impact on clinical trials in ovarian cancer. So the only way to move forward is by collaboration in very large international, European and even global collaborative groups. And that’s one of the things that ESGO really tries to promote and, in fact, ESGO has its own clinical network which is called ENGOT which stands for the European Network for Gynaecological Oncology Trials. Within this network we try to perform and we try to do clinical trials that really need large collaborations.

What are the options for women with late stage ovarian cancer?

That’s a very difficult question at the moment. There has been a long time quest for markers, for example serum markers, to detect ovarian cancer in an early stage and there’s a very large on-going trial in the UK by the group of Ian Jacobs which is really addressing the type of screening for ovarian cancer and I think we need to wait for at least another three or five years before the results of that trial will become available. So at this point the value of screening for ovarian cancer is still unproven and real new markers are, at this point, not available.

Are there any other genetic markers for ovarian cancer?

The options, of course, are surgery in combination with chemotherapy and hopefully with the next five to ten years the options for chemotherapy, and especially targeted therapy, will become more widespread. Therefore we need to evaluate all those different and new drugs in so-called smart clinical trials. What we really need is biomarkers that help us to predict which patients are going to respond to all these specific targeted therapies. ESGO has its ENGOT, which is specifically aiming at clinical trials but also recently during the last two years we have established so-called ENTRIGO, which stands for European Network for Translational Research in Gynaecological Oncology. This network tries to bring together more basic scientists together with a clinical group involved in clinical research and try to get them together and then promote translational research which, in fact, means that you bring science from the lab to the patients, look what it does in patients and go back to the lab again. So that’s a major effort, I think, for the last two years what has happened in ESGO. For example also at this meeting, I think six or eight years ago if you would go to an ESGO meeting you would find very little translational research and the sessions were attended by, let’s say, five to ten people. At this meeting we had yesterday a workshop, I think there were more than 300 people attending that meeting and they were very enthusiastic so I really think that ESGO, in that respect, is moving to a new era.

Safety and efficacy of olaparib plus metronomic cyclophosphamide and metformin i...
Prof Benoit You - Hospices Civils de Lyon, Lyon, France 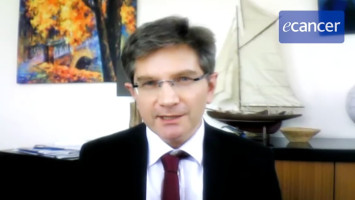