Prof Christos Markopoulos speaks to ecancer about the predictive potential of POLAR (Profile for the Omission of Local Adjuvant Radiotherapy).

The researchers of this study performed a meta-analysis of 623 patients with lymph node-negative, estrogen receptor-positive, and HER2-negative breast cancer who were enrolled in one of three randomised clinical trials examining the efficacy of breast-conserving surgery with and without local breast radiation therapy.

In order to evaluate the predictive capability of POLAR, the researchers analysed gene expression in patient breast tumour samples to assign each patient a POLAR score. They examined the impact of radiation therapy on patients with high and low POLAR scores.

Prof Christos Markopoulos continues to discuss the results of the study.

The POLAR study, POLAR stands for the Profile for the Omission of Local Adjuvant Radiotherapy, is a meta-analysis of three randomised trials where the POLAR signature was validated. The POLAR signature is a 16-gene signature which was developed in a Swedish trial years ago where they tried to find the differences of genes between patients receiving radiotherapy or not, all patients had breast-conserving surgery, and having non-systemic treatment.

This presentation in the San Antonio Breast Cancer Symposium a couple of weeks ago was a meta-analysis of the validation of the POLAR signature. There were included three trials, the total number was 658 patients – the Swedish trial where all patients received no systemic therapy; the Princess Margaret Hospital trial from Canada where all patients received tamoxifen; and the Scottish trial of conservative surgery where patients received systemic therapy according to their hormone receptor status. They were all randomised to receive or not radiotherapy. The aim was to validate the POLAR signature as a prognosticator and as a predictive assay for radiotherapy benefit in patients undergoing breast conserving surgery.

It is important to say that these percentages are with a mean of ten years of follow up because in the Princess Margaret Hospital we had eight years’ follow up, going up to the Swedish trial where the follow up was over 20 years.

Something else which is important also is that all patients were low risk, hormone receptor positive, lymph node negative, HER2 negative patients. As I said before, the majority of patients coming from the Swedish trial, 57% of the population was from that trial, received no adjuvant therapy, either chemotherapy or hormonal treatment.

This is a very important result because for the first time we have a signature which is aiming to predict, not only to be prognostic in terms of local recurrences but also to predict if there is any benefit from radiotherapy. We already have had the feeling that some low risk patients wouldn’t really benefit from radiotherapy but up to date there still is radiotherapy added to breast conserving surgery as the routine. Yes, we did have some indications from the Oncotype DX recurrence score for DCIS having again a prognostic and predictive value, but now we have for invasive disease.

At the moment we only have a small number of patients and we certainly need a clinical trial with larger numbers but I think that this is very promising because we could avoid to a certain number of patients, low risk patients, another modality. It follows the paradigm we had with chemotherapy – Oncotype DX recurrence score helped us to change our practice and avoid chemotherapy in a very high percentage of patients who do not really get any benefit.

I’m wondering, I haven’t seen any data yet, if these two could be really combined because the genes are different – the POLAR genes are related to immune response and proliferation; the 21-gene signature is using these and other genes. But I’m wondering if these could be combined to help us to decide those low risk patients who probably do not need either radiotherapy or chemotherapy and would have a very nice outcome only with surgery and hormonal treatment.

I’m really waiting to see trials starting because there is a slight disadvantage where we have to do trials like this. Because, for example, we have also to answer the question what is going to happen for those patients who do not receive adjuvant radiotherapy in terms of the long-term benefit radiotherapy might have in their overall survival.

So, in conclusion, the results, it is very nice and I’m enthusiastic that we do have this signature for radiotherapy. However, the numbers are small and we still have a lot of things to answer. But it’s really very interesting and very, very important. 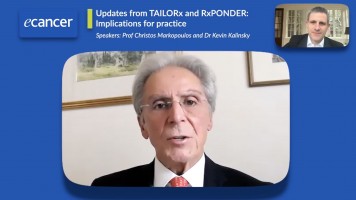