He discusses the support of clinical trials planned by the WIN Consortium, clinical trials directed at integral markers; markers that require an evaluation of specimens to assign patients to therapies.

The WIN Consortium is making major steps forward in designing clinical trials to look at the specific targets for which drugs are directed. The nature of the WIN worldwide consortium means that many different requirements exist across many countries: Studies are being launched to evaluate drug targets in different populations worldwide, important as molecular characteristics of tumours vary greatly across the world.

The key aspect of the biobanking is the support of the clinical trials that are planned in WIN. The organisation has now gotten to the point that it’s beginning to assemble clinical trials that are directed at integral markers, that is markers that require evaluation of specimens to assign patients to therapies. This is a major step forward in designing clinical trials and bringing them to a stage where they will look at the specific targets for which drugs are directed. The problem is that it’s obviously a very complicated situation and any time that there are multiple institutions involved in this kind of activity, doubly so with WIN because it is a worldwide consortium so that, as a consequence, we are talking about the environment accessibility rules, patient aspects of a large number of countries in various areas of the world, often with very different requirements in comparison to other countries.

What is the WIN Consortium’s role?

This will be part of the clinical trial efforts for the most part. Some of the studies are going to try to evaluate drug targets in different populations worldwide. This is an important exercise because the molecular characteristics of tumours in different patient populations around the world are clearly different. The epidemiologists have told us for decades that colorectal cancer in one area of the world is not the same as the other, based on differences in age and demographics. We’ve now learned that at the molecular level that the same thing applies, that the molecular characteristics, the gene mutations that are present are often different, or at least different in prevalences from one population to another. So, as a consequence of this, being able to do these kinds of studies in populations derived from various sites is key in moving drug targets forward. It’s likely, based on previous experience, that some of these targets will be much more frequent in tumours of one country or one ethnic racial group than they will in another because of the underlying characteristics that are responsible for the development of the cancer in those populations.

What work does your lab carry out?

We cover the entire breadth of pathology services at our institution, from anatomic pathology through laboratory medicine, as well as having a large research component to it. The major focus for us is in two areas: the first one is the molecular characterisation as most institutions are now doing in trying to identify targets and look at the characteristics of tumours at the molecular level that will predict resistance or response to particular types of therapy. The second is in the informatics to support those activities. Clearly one of the great things about the advances of technology is that they generate huge amounts of information; one of the bad things about the new technology is they generate huge amounts of information. So you have to have an informatics system to be able to address that and with an institution as large as ours it’s a major challenge to convey the information to the clinicians, let alone to do the assays to derive that information in the first place.

Is a bioinformatics department at every institute now the norm?

Clearly the major cancer centres do and this is an outgrowth, again, of demand. Biostatisticians have been key components for years, we’re now in a situation where the bioinformatics leading to the biostatistics has increasing importance because of the multi-parameter analyses that we’re able to do. And the requirement for large numbers of patients, large sample sizes in clinical trials, to address the heterogeneity that occurs between patients with different types of molecular changes in the same histologic or organ site origin of the cancer. 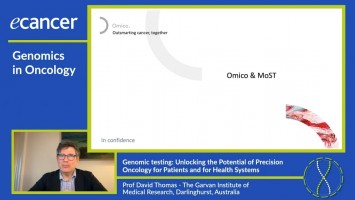