Initially, they talk about what was learnt from ASCO and EAU 2022 and what its impact can be on any changing guidelines and best practices.

They discuss what is ethical and valid in choosing a treatment for men with prostate cancer.

Prof Efstathiou discusses a few cases from EAU 2022 on how to treat prostate cancer patients.

They conclude by talking about what the future should look like for treating prostate cancer patients.

This programme is supported by an unrestricted educational grant from Janssen.

EE: Hello everyone, I’m Eleni Efstathiou and I’m joined by Professor Nicolas Mottet from France. I’m actually a medical oncologist so I’m joined by Dr Mottet who we all know is a urologist so we’re a little bit balanced out. We’re both actually in Europe, we were just recently together in several quite exciting meetings that happened over the EAU Conference that occurred in Amsterdam. We wanted to bring together our thoughts from not just the abstracts but also the plenary sessions that occurred. I think that it was quite interesting to see that the organising committee really focussed, and I was, as you were Nicolas, involved even in the educational meetings, really focussed on pushing the knowledge and the education that is needed with regard to metastatic hormone naïve prostate cancer; understanding and acknowledging that we are lagging in picking up what is ethical and considered appropriate for treatment for men with metastatic disease. I really appreciated that; it was more strong than I saw at ASCO or ESMO so really kudos for that. I wanted to get your thoughts on that and what else we should do with regard to the educational objectives, specifically for urology.

NM: I fully agree with you, Eleni, on that. Regarding urologists, I believe more and more that if we want to get involved in all these stages, especially the most advanced stages when we [inaudible] we need to be educated, that means we need to know how they work, how can we select the cases and at least understand what is ongoing. If we don’t want to do it by ourselves, at least we need to understand when to refer to someone who is able to do it because, as you absolutely know, we have new drugs or new possibilities that are directly related to patient selection in a number of situations instead of care. For breast or colon you screen based on biology; for prostate we are just beginning to discover it and clearly there seems to be a lot of underused, not to say misused, but for sure a misunderstanding just because we are initially surgeons and we need to go back to real medicine and to the biology which is the real basis for all what we are doing. Even with the new hormone therapy it is related to biology. So we need to grow up a little bit. Not forgetting the basis but building on that requires biology knowledge and education requires this. The second point is we should never forget what has been observed and clearly seen in randomised phase III trials where we have very clear evidence for very specific situations. We are beginning to face issues, and I might say major issues, just because we believe that just changing one thing changes everything. You know what I’m referencing to here, it’s purely images – all we have is based on conventional and suddenly this really practice- changing issue of PET PSMA changing everything but we need to not forget what we knew from the old-fashioned trials where we have very clear evidence for certain situations. But that will probably come during the discussion. About education and repetition, repetition, repetition I don’t see anything else.

EE: It seemed that that was the purpose of even the meeting. So I like that you brought that up. There was a moment in the thematic session that I participated in where there was over and over again different state of the art lectures speaking to intensifying treatment for hormone naïve prostate cancer that is advanced and metastatic. Then all of a sudden we were thrownin in an oligometastatic case, I will bring it up to get your thoughts. He was a 57-year-old man who shows up with de novo or synchronous oligometastatic disease with one bone met and some lymph nodes. Then on top of it the presenter layered a PET PSMA that added beyond pelvic lymph nodes some retroperitoneal para-aortic, if I remember correctly, lymph nodes that were positive on PSMA. Then there was a debate. I was given the task of actually saying that you need to use systemic treatment for these men that is a doublet and Noel Clarke was given the task to speak with regard to only treating the primary and metastasis-directed therapy without using hormones. And he was shocked, obviously, so when he pretended he obviously took the side of combining and the fact that there are no data towards that.

So to that point, I wanted to get your clear message because you pointed to the fact that biology is key. We all agree that there is a small percentage of cases that may be exquisitely sensitive to directed therapy and what have you but there is no way of knowing them. So we… err on the side of, for some people, thinking it’s overtreatment just to cover all potential bases. That’s how I view it; I’m not saying that we won’t unveil at some point these men who need less. So the message, though, is not clear and a lot of people take the risk of only treating metastasis directed without enhancing systemic, taking the risk of allowing this disease to be very detrimental to the patient. So how would you frame it as a urologist to the urology community?

NM: Well I would be very simple minded. As usual, for guidelines we need to be based on facts. We know that once you are metastatic, based on conventional imaging, standard of care is ADT plus something. That’s a very simple, reliable, correct message. So it’s ADT plus something, the question is plus what, but at least the minimum is ADT plus something. If you want to intensify systemic therapy it’s ADT, nowadays with the ARASENS and the PEACE-1 trials and ENZAMET it’s ADT plus abiraterone. Docetaxel on top of ADT, point, is dead – three trials completely killed that. The question is, okay you just have one spot in the bone, he has a limited amount of disease visible on conventional imaging but that’s what you see. Standard of care is ADT plus something. Everything on top of that, especially metastasis-directed therapy is feasible, it sounds to be quite attractive for some radiotherapists but it’s not supported by anything. Most of the data we have are for those patients who relapse after local therapy; for the newly diagnosed the evidence we have is even more limited – to my knowledge less than twenty cases reported so far and the only thing they were able to show is that it’s feasible, nice, not so toxic, nice. I haven’t said no toxicity, I just said not so toxic, at least a very acceptable toxicity. Does it change anything? Absolutely nobody knows. So if we want to be as effective as we were until now for a lot of situations, keep going using metastasis-directed therapy. In twenty years from now we’ll still be unclear is it useful. The only way to do it is to do it in trials, not to forgot the basis which is ADT plus something systemic.

EE: That’s very clear and, indeed, systemic therapy is the backbone, just to be clear. You cannot go without systemic treatment because it is unethical and wrong. I even heard that in Germany you can get in real trouble if somebody wants to pursue as a medical error at this point since they were approved, I was told by a German urologist. And it’s not about how we practice medicine but it becomes a serious ethical concern. 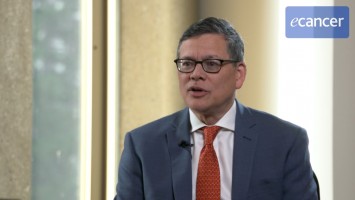