Dr Juan-José Garcés speaks to ecancer about the abstract he presented at ASH on the mechanism of egression, clinical significance and therapeutic endpoints of circulating tumour cells (CTCs) in smouldering and active multiple myeloma (MM).

He explains that the study aimed to investigate the clinical significance of CTCs in patients with smouldering, newly diagnosed and released or refractory MM, and wanted to compare the transcriptional profile of CTCs across the disease spectrum.

Dr Garcés reports that results support that CTC assessment should be part of the diagnostic workup of MM, as high-risk patients could be helped by earlier intervention. He concludes by discussing the limitations of the study, what questions were raised still need to be answered and how these can be further investigated.

In recent decades the therapeutic field of multiple myeloma has experienced a revolution. In the last two decades we have discovered, we have developed, more than 15 drugs with different mechanisms of action that improve not only the life expectancy of these patients. However, there is a lack in the stratification systems to go according to these advantages. So we think we have a lot of room for improvement and we think a way to do this could be by incorporating the tumour burden into these stratification systems because until now this burden is only measured through beta macroglobulin or albumin. That’s our indirect tumour burden assessments.

Up to now the gold standard for tumour evaluation are the bone marrow aspirates and we know that this approach is highly invasive and makes it very limited to more strict patient follow-up. By contrast, circulating tumour cells present along the disease, the entire disease evolution, also in the pre-malignant stages such as MGUS or smouldering myeloma. We propose CTCs, circulating tumour cells, as a non-invasive alternative, because it is quantified in the peripheral blood, for avoiding repetitive bone marrow assessments and for more stringent patient monitoring.

Moreover, under the hypothesis that circulating tumour cells, or CTCs, could be the clone responsible for myeloma spreading, it’s an important question to define a new biomarker to overcome this disease dissemination and detect the tumour burden in its totality.

We want to use CTCs in all these patients by next generation flow cytometry, that is an improvement on traditional flow cytometry, done by the EuroFlow Consortium to detect two events in one million cells, that is a sensitivity of 10-6, so a high sensitivity to detect a very low number of cells in the peripheral blood. Additionally, we also sorted patient matched plasma cells from bone marrow and peripheral blood to compare the transcriptional profiles of both compartments.

We found a lot of things, very, very interesting things. The first thing is we had CTCs in most of the patients and, more importantly, the CTC numbers, circulating tumour cell numbers, are correlated with other risk factors such as the classical ISS classification in newly diagnosed myeloma or the 2/20/20 model in smouldering myeloma developed some years ago by the International Myeloma Working Group for smouldering patients and, moreover, with cytogenetic risk, LDH levels.

Moreover, when comparing the plasma cell patient matched bone marrow peripheral blood, we found that both plasma cell compartments had a high similarity and we also found a very few number of genes differentially expressed. Moreover, and it’s the interesting point, we saw that these genes, even in low number, have an expression and are stable along the disease. We can see different expression patterns along the disease evolution, moreover, associated with functions such as inflammation, hypoxia, the p53 pathway. We are currently studying in more detail these transfusional insights to try to identify mechanisms of aggression to target the aggression.

On the other hand, we were able to calculate a series of cut-offs with prognostic value in these patients. For example, in those patients with smouldering myeloma and more than 0.02 CTCs, we identified a group of patients with ultra-high risk of transformation whereas this risk was abrogated with early intervention, such as in the CESAR trial.

Moreover, and the most important thing, is that we found that despite the complete response, only the achievement of MRD was the clinical criteria to abrogate totally the bad prognosis of high CTC levels in these patients.

How can these findings be interpreted?

CTCs could help to improve a bit more the current stratifying systems, taking into account the direct assessment of the tumour burden. Especially I would say that this low invasiveness is a clear advantage for closer follow-up of these patients.

We also think that the current scenario is a very controlled scenario and is maybe limited to a clinical trial; it’s not very representative of the reality of the patients. We are trying to expand this study to include more clinical patients outside of clinical trials to expand these findings.

In my opinion, the clinical relevance, for example, is, as I mentioned previously, this is a trial, it’s a nice example of how the best prognosis of high disease levels in untreated patients will be totally removed by an intensive and early treatment.

Even though we are far yet, we like to increase the number of patients and therefore the depth of the studies, the academic studies, trying to identify the mechanisms that are facilitating the plasma cell to egress from the bone marrow and try to identify targets to avoid this disease dissemination. Maybe this study is not big enough to obtain conclusions about that idea.

I will also say that I have been so lucky to present our work in this congress but it is only the peak of the iceberg because all this work relies on a very big collaborative effort from the entire Spanish team. Totally they get it to cure myeloma and I would like to thank all the team for their efforts. 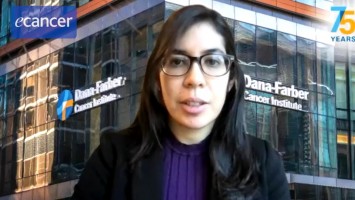