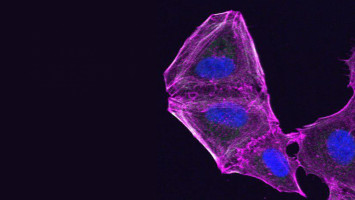 Immunotherapies have improved outcomes of many patients with cancer, including melanoma.

But these therapies work for only a subset of patients.

TILs are immune cells in tumours that can recognise and attack the cancer cells but often there aren’t enough of them or they’re unable to harness a strong enough response to durably suppress tumour growth and spread.

In a new article published in Nature Cancer, Lau’s team demonstrates how L-fucose, a nontoxic dietary plant sugar that is enriched in red and brown seaweeds, can increase TILs, promote antitumour immunity and improve the efficacy of immunotherapy.

The sugar molecule L-fucose, while found in foods, can also be made within our own cells through the breakdown and conversion of other molecules.

It is important for immune and developmental processes, and abnormalities with L-fucose synthesis and usage are associated with diseases including cancer.

“Overall levels of L-fucose in melanoma cells decrease and how the cells use L-fucose changes during progression. However, we have found that raising L-fucose levels via dietary supplementation can suppress tumours, markedly increase TILs and enhance the efficacy of some immunotherapies in our animal models. In humans, higher levels of L-fucose in melanomas are associated with less aggressive disease and better responses to therapy,” said Lau, lead study author and assistant member of the Tumour Biology Department at Moffitt.

The research team wanted to determine the mechanisms underlying how L-fucose appeared to increase TILs and trigger their antitumour activity.

For nearly seven years, they performed a battery of laboratory experiments and demonstrated for the first time that L-fucose can regulate interactions between CD4+T cells, a type of TIL, and melanoma cells.

Their studies found that of the many types of immune cells that comprise TILs, CD4+T cells play a crucial role in mediating the increase in TILs that suppress melanomas during L-fucose treatment.

“When one thinks of sugar, one often thinks of glucose or sucrose — common table sugars that our cells use for energy. Unlike those sugars, L-fucose is used by our cells not for energy but to decorate proteins to fine-tune their behaviour and activity. We found that the addition of L-fucose onto the protein HLA-DRB1 causes it to be localised to the surface of melanoma cells, which triggers CD4+T cell-mediated antitumour immune cell activity,” said Lau.

In addition to decorating proteins in tumour cells, Lau’s team also found that L-fucose alters the biology and behaviour of CD4+T and other immune cells, suggesting that this sugar might be used to modulate immune function.

These findings have important implications for using L-fucose to enhance immunotherapies that are currently used to treat cancer patients. “So, we took our work one step further and discovered that oral L-fucose also enhances activity of immunotherapy drugs in some of our melanoma models.”

Next, the researchers looked at tumours from three independent groups of patients from three cancer centres to assess whether L-fucose levels and L-fucose-decorated HLA-DRB1 might reflect patient responsiveness to the immunotherapeutic agent anti-PD1.

They found that patients who responded well to anti-PD1 therapy tended to have higher levels of both in their tumours, suggesting that these may be useful as potential biomarkers to predict responsiveness to immunotherapy.

“Our findings identify and delineate a molecular mechanism by which L-fucose regulates an important interface between melanoma and immune cells. This mechanism can be therapeutically leveraged by simply feeding L-fucose, which suggests a provocative and almost counterintuitive possibility: using sugar to fight cancer,” Lau said.

Moving forward, Lau and his team hope to translate their preclinical findings to help patients more directly and determine how much L-fucose can enhance immunotherapies, starting with a small clinical trial of melanoma patients.