ASCO GI: Nab-paclitaxel does not extend biliary tract cancer survival but may benefit some 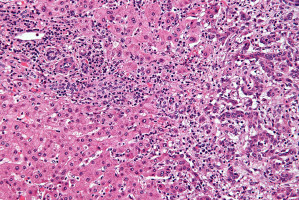 Adding nab-paclitaxel to a standard treatment of gemcitabine plus cisplatin does not significantly extend median overall survival (OS) time for patients with advanced biliary tract cancers, although it may provide a benefit for subsets of patients with locally advanced disease or gallbladder adenocarcinoma.

These results are from the phase 3 S1815 trial conducted by the SWOG Cancer Research Network, a cancer clinical trials group funded by the National Cancer Institute (NCI).

The findings will be delivered in an oral presentation at the 2023 Gastrointestinal Cancers Symposium of the American Society of Clinical Oncology (ASCO GI) on January 20 (abstract LBA490).

The S1815 trial was led by Rachna Shroff, MD, a SWOG investigator who is associate professor of medicine at the University of Arizona Cancer Centre.

Dr Shroff will present the results at the ASCO GI meeting.

“This was the first randomised phase 3 trial to be conducted in the United States in biliary tract cancers,” Dr Shroff said. “It was a pivotal trial that demonstrates the ability to swiftly complete these studies in what are thought to be rare malignancies. The study did not meet its primary goal of improving overall survival with the addition of nab-paclitaxel to gemcitabine/cisplatin, though the overall survival, median progression-free survival, and overall response rate were numerically better.”

Biliary tract cancers (BTCs) – a group of rare cancers that include cholangiocarcinoma and gallbladder cancer, among others – typically are diagnosed at an advanced stage, with a poor prognosis.

Gemcitabine-based regimens are standard treatment in advanced disease, but median OS with these regimens is only about 12 months.

An earlier phase 2 trial led by Dr Shroff found that adding nab-paclitaxel to a standard regimen of gemcitabine plus cisplatin extended median OS in these patients to about 19 months.

Given those promising results, SWOG S1815 was designed as a randomised phase 3 trial to compare this nab-paclitaxel combination to the standard gemcitabine–cisplatin regimen to determine whether it would extend survival times in a larger group of patients newly diagnosed with advanced BTCs.

Of the 441 eligible patients randomised on the trial, about two-thirds had intrahepatic cholangiocarcinoma.

The remaining third were almost evenly split between gallbladder adenocarcinoma and extrahepatic cholangiocarcinoma.

The objective response rate among patients overall on the investigative arm was 34 percent versus 25 percent on the control arm, and the median progression-free survival times were 8.2 months and 6.4 months, respectively.

The proportion of patients with Grade 3 or greater haematologic adverse events (side effects) was significantly higher on the nab-paclitaxel combination than the standard gemcitabine–cisplatin regimen: 60 percent versus 45 percent (p=0.003).

The rate of treatment discontinuation due to toxicity was also slightly higher on the nab-paclitaxel arm – 24 percent versus 19 percent – although this difference did not reach the level of statistical significance.

In exploratory subset analyses, the researchers found that median OS was significantly longer on the nab-paclitaxel combination than on the standard gemcitabine–cisplatin regimen for those patients who had locally advanced disease (19.2 months versus 13.7 months) or gallbladder adenocarcinoma (17.0 months versus 9.3 months).

“While the addition of nab-paclitaxel did not improve survival, the triplet may merit further investigation in locally advanced biliary cancers as a potential neoadjuvant approach,” Shroff said. “Additional ongoing genomic analyses from S1815 may also help elucidate potential molecular subsets of patients who could benefit from this combination.”

Study S1815 was supported by the NCI, part of the National Institutes of Health (NIH), led by SWOG, and conducted by the NIH-funded NCI National Clinical Trials Network (NCTN).

“S1815 really shows the reach and importance of the NCTN in conducting trials in rare tumours such as biliary tract cancers,” said Philip A Philip, MD, PhD, professor of oncology at Henry Ford Cancer Institute at Wayne State University, chair of the SWOG gastrointestinal cancers committee, and senior author on the ASCO GI abstract. “This phase 3 trial was quickly opened at sites across the US and, with more than 150 sites enroling at least one patient to the study, it completed enrolment in just over two years.”