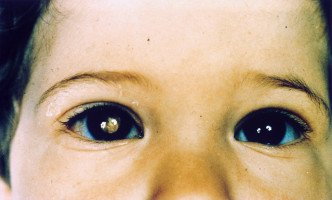 Despite decades of medical advances, children who develop the paediatric eye cancer retinoblastoma often lose their vision or an eye due to a lack of specific, targeted therapies and a poor molecular understanding of the cancer.

Now researchers at UT Southwestern and the University of Miami have discovered that a molecule – oestrogen-related receptor gamma, or ESRRG – becomes hyperactive and promotes tumour cell survival in retinoblastoma.

“Our discovery could lead to innovative new treatments for this cancer that take advantage of this dependence of retinoblastoma on ESRRG,”  said study leader J William Harbour, MD, Chair and Professor of Ophthalmology at UT Southwestern.

Before joining UTSW last year, Dr Harbour served as Vice Chair for Translational Research at the Bascom Palmer Eye Institute at the University of Miami.

Retinoblastoma is a rare cancer affecting the retina – the tissue in the back of the eye that receives light and converts it into signals to the brain.

It is most often diagnosed in children under 2 and has been associated with mutations in the RB1 gene.

However, there are currently no specific, targeted therapies; doctors rely on broad-acting chemotherapy drugs that carry numerous side effects and toxicities.

In the new study, Dr Harbour and his colleagues analysed genes and proteins in tumour cells from 103 retinoblastoma patients, representing the largest sequencing analysis of retinoblastoma reported to date.

While 94% of the tumours contained RB1 mutations, many also contained other altered genes.

When the scientists analysed these other mutations, they discovered that many were involved in the same signalling pathway inside cells: a molecular network that regulates ESRRG.

ESRRG is known to play a role in the early development of the retina and other components of the nervous system but had never been linked to retinoblastoma before.

The team went on to show that RB1 normally puts the brakes on ESRRG in normal retinal cells.

However, in retinal cells that have transformed into retinoblastoma, ESRRG becomes activated and helps keep cells alive and proliferating, even as oxygen levels drop – normally a signal that kills healthy cells.

Blocking ESRRG causes cells to die under these low-oxygen conditions that are common in rapidly growing tumours and inside the eye.

The researchers noted that more studies are needed to prove that drugs targeting ESRRG could be used in humans to treat retinoblastoma.

But their results are encouraging.

“Retinoblastoma is the most common eye cancer in children, and it is incredibly exciting to finally have a potential drug target,” said Dr Harbour.